Microsoft is updating a number of its Windows 8 apps this week and the company is now starting to push some Xbox-related changes. The games app, built into Windows 8, is being updated to include Xbox Live messaging support with toast notifications. Microsoft has also tweaked the user interface slightly, with the home screen displaying the most recently played game along with the relevant achievements. Access to related downloadable content, game trailers, and screenshots has also been improved. 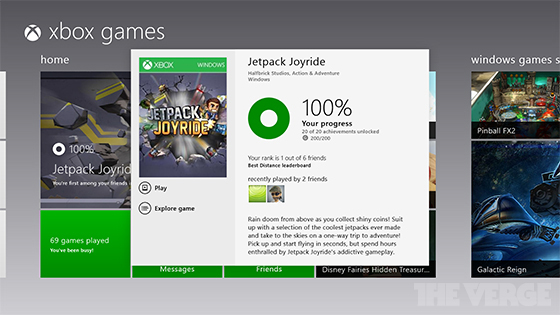 On the Xbox SmartGlass side, Microsoft started pushing out updates to the application earlier this week. Devices will now stay awake when SmartGlass is in use with some stability and connection improvements. Microsoft has also updated its controller layout with an Xbox guide button to help navigate the Xbox UI more easily. Both updates are rolling out to Windows 8 and Windows RT devices in the Windows Store this week.