Flipboard announced today that it has 50 million users, and also released a new version of its app that lets every one of them become an editor-in-chief. Flipboard 2.0 is "the most epic release we've ever done," CEO Mike McCue told The Verge, and most of its new features focus on curation: users can now "flip stories," in the app or in a browser via a bookmarklet, into their own magazines. Other users can subscribe to those magazines, and whenever the magazine's owner adds something new it updates subscribers' versions as well – it's very much like a Spotify playlist in that sense.

We've been playing with the new version of Flipboard for about a week, and it's definitely better than ever. There are some small aesthetic changes in the app: search is now much more prominent, and the tiles themselves are full-width on the page. The table of contents for a publication, once buried in the header menu, is now much more prominent. Everything is more visual, using tiles and magazine covers instead of text lists. Generally the app is just prettier without being notably different, and it's definitely faster than ever too.

But curation is the primary tool here, and we've had some fun creating magazines of some of our favorite Verge content, plus things we love from around the web (disclosure: The Verge is one of Flipboard's publishing partners). Creating a magazine is really easy, but it's a little hard to figure out why you'd do it — it makes plenty of sense for publications, allowing Rolling Stone to offer all its Beatles coverage in one place and giving Esquire an easy way to share all its interviews with beautiful women, but Flipboard hasn't quite defined why an average person would use it instead of pinning things to Pinterest or posting them to Tumblr. 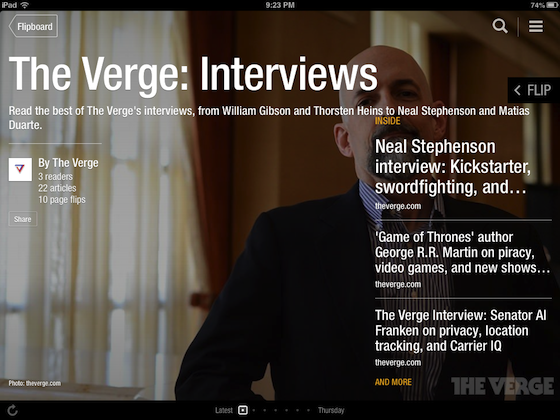 That said, if you do want to create a magazine of your favorite running articles, or your favorite Daft Punk remixes (Flipboard integrates really neatly with SoundCloud, so you can have soundtracks for your magazine), it only takes about two taps in Flipboard or two clicks in a browser, and for enthusiast users might make more sense than the topic-specific Tumblrs we see cropping up everywhere. You'll get notifications when people subscribe to your magazine or like something in it, and people can even suggest additions to your mags. Flipboard 2.0 also integrates with Etsy, making it easy to shop and buy things right from within the app – it's not hard to see that quickly becoming a bigger part of what Flipboard does, and how it makes money.

This is only the beginning for Flipboard's curation tools

For right now, each magazine has only one owner, and two options – private or public. Over time, CTO Eric Feng told us, users will be able to co-edit magazines — both Feng and McCue stressed that 2.0 is only the beginning of the curation story, which the company plans to make a much bigger part of how Flipboard works going forward.

It would be an even easier sell if Flipboard had a web app for viewing articles or better offline support, but that's not in the cards for version 2.0. You can share magazines via social networks or email, but all it displays is a nice landing page unless you're on a device with Flipboard installed. We're hoping that's a little different in version 3.0. The new features are iOS-only for now, but they're coming to Android in about a month.

Thomas Houston contributed to this report.