US government agencies are advertising on accused pirate sites

US government agencies are advertising on accused pirate sites

Are US agencies lending credibility to pirate sites?

The US president and vice president have come out against the theft of intellectual property; dozens of congresspeople have condemned illegal file-sharing. The US Attorney has filed criminal copyright charges against Kim Dotcom and Megaupload. So, how come multiple accused pirate sites feature advertisements from several US government agencies, including the US Army, National Guard, and even Smokey The Bear?

Sources have told The Verge that the Annenberg Innovation Lab at the University of Southern California will reveal tomorrow that the US government is among the groups that are lending credibility to sites accused of intellectual property theft. The revelation will be part of the lab's monthly report, which lists the online ad networks that support accused pirate sites. That the federal government is advertising on these sites could be embarrassing for the Obama Administration, which has pledged to step up antipiracy efforts and protect US jobs.

The revelation could be embarrassing for the Obama Administration

Many of the ads found on the sites accused of infringing intellectual property were distributed with the help of the Ad Council, the non-profit group that oversees the creation of public service announcements for the US government and other sponsors. Each federal government agency that contracts with the Ad Council "pays for the production and distribution costs," according to the Ad Council's web site. But none of the government's money finds its way to the accused pirate sites, an Ad Council spokeswoman said on Thursday. The Ad Council only operates on a "donated media model."

It's unclear whether anyone from the US Army or the Ad Council know where the ads appeared. Representatives for the Annenberg Innovation Lab weren't immediately available for comment. In the photo below, an ad for the US Forest Service appears on a site accused of piracy. 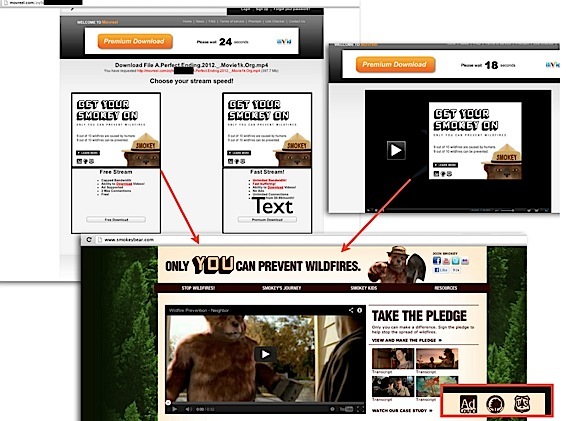 In addition to the US Army and US Forest Service, the Ad Council also has overseen in the past ad campaigns for the American Cancer Society, National Crime Prevention Council, and US Department of Justice, which is pursuing criminal copyright charges in New Zealand against Dotcom, the founder of cloud storage service Megaupload. In January 2012, the DOJ accused Dotcom and other Megaupload managers of enabling users from across the globe to store pirated movies, music and other content in the company's web lockers. The DOJ alleges that Megaupload encouraged users to share the materials with each other.

To leaders at the top Hollywood film studios and at the major record labels, the ads are liable to be an unhappy reminder of President Barack Obama's mixed record on piracy fighting. He promised to do more to protect intellectual property, but then pulled his support for the controversial Stop Online Piracy Act, the antipiracy legislation heavily backed by the entertainment industry that was opposed and crushed last year by the tech sector. USC's full report is expected to be posted tomorrow morning.

Correction: The Ad Council said that the production and distribution costs that government agencies and other sponsors pay for public service campaigns do not include advertising payments and no government funds go to accused pirate sites.