"You are the space invaders"

"Just for you guys today we're going to do something special, something that's never been done before" said Victor Luo, NASA human interface engineer. "We're going to drive this robot, on stage at GDC, with a Leap Motion device."

In an unexpected demonstration at the 2013 Game Developers Conference in San Francisco, scientists from NASA used the Leap Motion to control a six-legged, one-ton Athlete rover located at the space agency's Jet Propulsion Lab in Pasadena, California. Using his hands in front of a Vaio laptop on stage, Luo raised one of the Athlete's legs as the crowd at the Moscone Center watched along via a live Google+ Hangout. And while this demonstration was impressive in its own right, NASA's ambitions reach much further than the 383 miles to Pasadena. 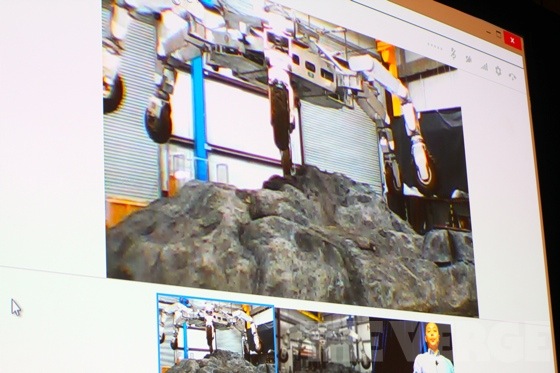 "It happened in this hallowed ground of the living room, a place we'd like to be again."

Before articulating the Athlete's limbs over the internet, NASA walked through its work to reach new audiences with gaming, detailing its recent efforts in games like Mars Rover Landing on the Xbox 360, Moonbase Alpha, and other games that allow players to control and maneuver virtual NASA robots. The games are all part of the agency's efforts to reach the public by returning to the living rooms of people around the world; "In the 1960s, the landing of Apollo 11 was the most watched television broadcast at the time in history," said NASA manager Jeff Norris. "It happened here. It happened in this hallowed ground of the living room, a place we'd like to be again." But what began with Kinect-infused demonstrations of NASA games ended in an inspiring, audacious vision for the future of human space exploration.

"I want us to build a future of shared immersive tele-exploration."

In a moving speech capping the Leap Motion demonstration, Norris envisioned a future in which human beings, using simple interfaces (like the Leap Motion or Kinect), are able to remotely explore the universe with robotic astronauts and rovers. "We all desperately want Star Trek," said Norris. "I do believe that humanity's destiny is to climb aboard starships and explore the universe. I think at last we finally have in our grasp the technology necessary to build a very important room on this vessel."

"I am overwhelmed with hope, but also impatience," Norris said. "I want us to build a future of shared immersive tele-exploration — everyone exploring the universe through robotic avatars, not just peering at numbers or pictures on a screen, but stepping inside a holodeck and standing on those distant worlds." 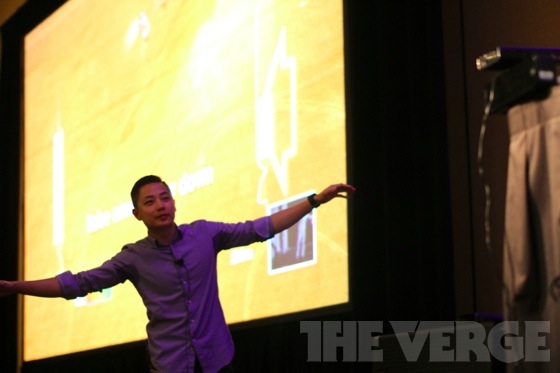 NASA is working with control manufacturers like Leap, Microsoft, and others, to adapt their technologies to NASA systems that may one day explore asteroids, moons, and planets. "They can leverage us for our brand, and we can leverage them for their technology," Luo told The Verge. "We're here at GDC because of that." And while Athlete — a research platform — may not reach space, its technologies, and the consumer devices that control it, might get there someday; Luo says that NASA is "doing research about what will hopefully be the control systems of the future," and devices like the Kinect, Leap Motion, and even the Oculus Rift are part of that effort. In other words, the motion controller you use to make stormtroopers dance in your living room could be a part of real space exploration.

"Let's bring a billion human beings into a holodeck and let them join the search for life."

A bona-fide Star Trek holodeck may be far off, but NASA is confident that we're already on the path towards creating one. "We can build today a version of that, and stepping stones to that," Luo said. In his closing message at GDC, Norris imagined a future of space exploration where humans on Earth extend their presence throughout the solar system, and beyond: "This is a vision of exploration in which everyone gets to go," Norris said. "These are voyages that we need to share with the world, and there are so many more places that we have to go." One of those places is Jupiter's moon, Europa — thought to be a primary target in the search for life outside of Earth.

"We must attempt a landing here, and when we do, when our robotic avatar arrives, let's gather millions on the surface of this desolate landscape," Norris said. "We'll look together on a world that even our most powerful telescopes haven't seen. Let's bring a billion human beings into a holodeck and let them join the search for life." Visions of holodecks and mass exploration in space may be far-fetched given economic realities on Earth. But it's good to know, in an age where the Space Race is often merely a metaphor for projects closer to home, that NASA is still dreaming big.