Why Mayor Bloomberg's vision of a drone-filled city doesn't fly

Why Mayor Bloomberg's vision of a drone-filled city doesn't fly

Taking a break from his crusade against sugary soft drinks, NYC Mayor Michael Bloomberg took some time during his weekly radio broadcast last week to downplay an issue that’s been at the forefront of privacy concerns in a growing number of US states: the use of unmanned aerial drones for ubiquitous police surveillance. "What's the difference whether the drone is up in the air or on the building?" asked an incredulous Bloomberg, now in the final months of his heavily-lobbied third term in office. "I mean, intellectually I have trouble making that distinction."

The comparison seems especially tone-deaf as lawmakers and citizens in other cities across the US continue efforts to block the use of drones by law enforcement for general surveillance. In Seattle, the public outcry has already derailed plans to introduce police drones, and in Florida, a bill currently sailing through the State Senate would require law enforcement to have probable cause warrants before using drones. 22 other states are in various stages of passing similar legislation; Virginia legislators have even gone as far as approving a bill that will put a two year moratorium on drones altogether.

The furor helps underscore that, yes, there is a huge difference between cameras in the streets and drones in the skies. "Many privacy invasions are abstract and invisible [...] Drones, on the other hand, are concrete and real, and the threat requires no explanation," wrote the ACLU’s Catherine Crump and Jay Stanley. "But they are just the most visible example of a host of new surveillance technologies that have the potential to fundamentally alter the balance of power between individuals and the state."

The NYPD's "Domain Awareness System" has around 3,000 cameras

In New York City, that balance has already been disrupted. Currently, the NYPD’s surveillance network is comprised of around 3,000 street-level cameras in Manhattan, connected to its loudly-trumpeted and Orwellian-sounding "Domain Awareness System." The system combines real-time CCTV feeds with data from various other sources, including 911 calls and CompStat crime prevention software, which uses statistics to algorithmically identify areas where crimes are likely to occur and dispatches police accordingly. NYPD commissioner Raymond Kelly announced last week that a citywide license plate reading program will soon be integrated into the $30 million system as well, allowing police to track practically all vehicle movements with unprecedented speed and efficiency. All video footage collected in this way is retained up to 30 days, and all other data can be kept for up to 5 years. 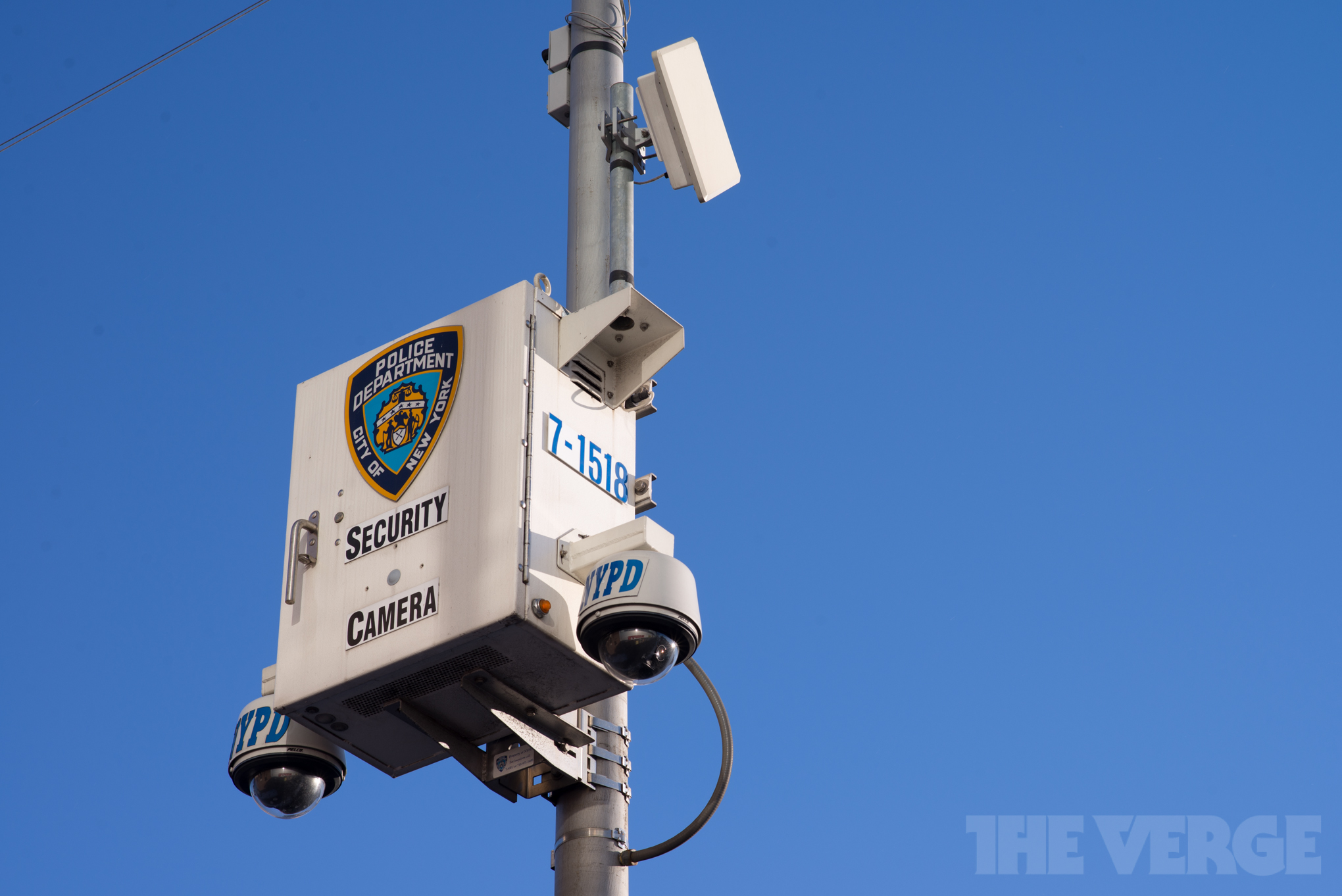 Before 9/11, the prelude to this massive surveillance expansion was VIPER, a collaboration in the late 90s between the NYPD and New York City Housing Authority which installed hundreds of police surveillance cameras inside low-income public housing. In the following years, police triumphantly cited a 36 percent reduction in crime in the housing projects they monitored. The stats were largely accepted, but a wider look revealed that crime had actually fallen overall in New York City during that decade, and so this drop might be the result of macro factors, not the new cameras. Further investigation by the Government Accountability Office was also unable to establish a direct link between surveillance cameras and reduced crime.

Even in the heavily-monitored UK, the country whose 2012 Olympic mascot was a cartoon surveillance camera, evidence has been spotty. In 2008, Scotland Yard solved only one crime for every 1,000 CCTV cameras within London’s infamous "Ring of Steel," which was created to combat a series of IRA bombings in the early 90s. The most commonly-cited independent study counts one CCTV camera for every 14 people in England (with the British Home Office estimating much lower). However, numerous factors have complicated any attempt at proving whether they are an effective deterrent. Some research has suggested that surveillance cameras often displace crime into the space outside of their influence rather than help solve or prevent it. David Davies, a Conservative Member of the British Parliament, has lamented that London’s massive camera population "creates a huge intrusion on privacy, yet provides little or no improvement in security."

Whether or not these systems are truly effective, their potential effects on privacy vastly differ from those of a surveillance drone hovering above a city. For one, the NYPD’s system does not include the vast majority of the city’s cameras, the privately owned units commonly affixed to the outsides of buildings. And even then, it’s difficult to make the argument that a network of stationary street-level cameras compares to "wide-area persistent surveillance" technologies like ARGUS-IS, the DARPA-developed drone surveillance system made from hacked-together cellphone camera sensors which can identify and track a person as they move across an entire city (the NYPD is already employing a lesser form of Argus camera in their CCTV network).

"I just don’t see how you can stop them."

Bloomberg, one of the world's richest men who rules over one of the most intensely policed cities on earth, should know this more than anyone. But with a strategically placed "fuggedaboutit," he disregards civil problems regarding privacy that his police force has probably long seen as administrative solutions.

"We're going to have more visibility and less privacy [...] you can't keep the tide from coming in," he said ominously, resigned to a supposedly inevitable scenario where drones constantly patrol the skies. "It’s not a matter of whether I think it’s good or bad. I just don’t see how you can stop them." 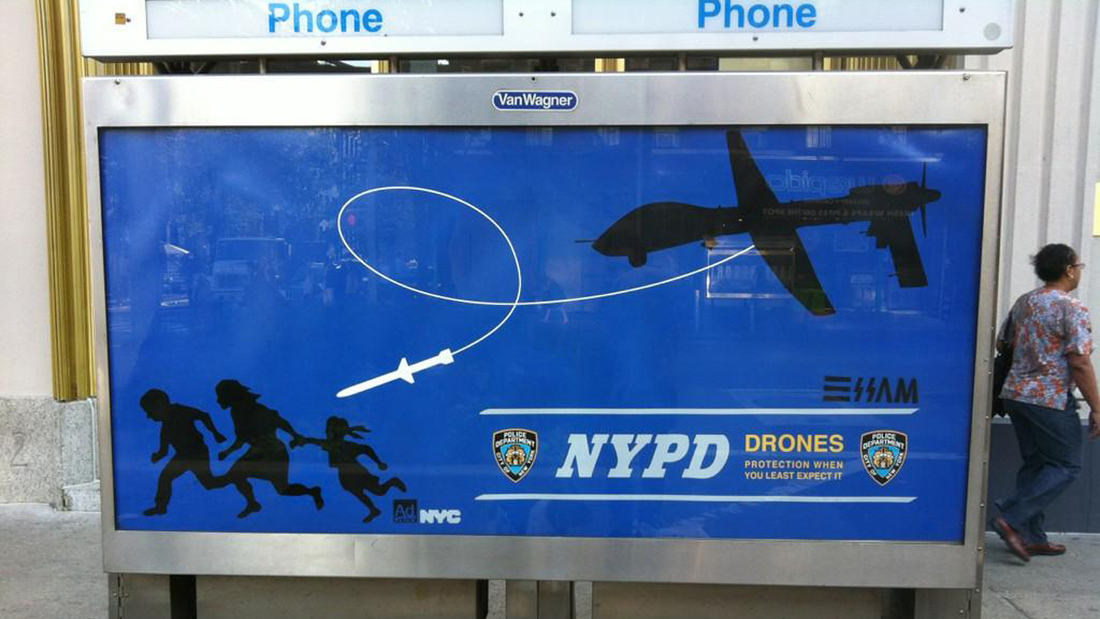 The sudden doom-and-gloom is ironic, considering how just last September, the NYPD spared no expense in tracking down and arresting Essam Attia, the street artist who posted fake NYPD "drone" billboards across the city, hoping to start a conversation about this very issue. The case was pursued vigorously by NYPD forensics and counter-terrorism teams, eventually serving Attia with 56 felony counts for the short-lived, politically-motivated vandalism. It's as if somewhere in the past few months, we've gone from please remove your tin-foil hats to Bloomberg's constant droning is inevitable — get used to it.

Is the situation really so hopeless? Perhaps. But it's certainly easier to think so when you preside over a paramilitary police force that frequently receives healthy doses of grant money from the US Department of Homeland Security to implement such surveillance programs. For years the NYPD has been using those resources to do things like infiltrate Muslim communities, employing alarmingly aggressive tactics in an attempt to ensnare average citizens as "terrorist suspects." More recently, the department has come under fire for its infamous "Stop and Frisk" program, which establishes quotas for officers to search random passersby, and overwhelmingly antagonizes black and hispanic men in low-income neighborhoods.

When Bloomberg predicts "more visibility," he means visibility of the citizenry, not the police

But for all these various strains of snooping, Bloomberg's NYPD has never been receptive to criticism, or demands for its own transparency. Just last week, the Mayor promised to veto a bill which would create new independent oversight of the department to investigate police misconduct. Why? According to Bloomberg, the increased oversight would "put the lives of New Yorkers and our police officers at risk," a claim which he made no attempt to prove. So it's again ironic, but perhaps not surprising, that when Bloomberg predicts "more visibility," he only means more visibility of the citizenry, not the police. By its nature, police surveillance is never "transparency" — it's a black box.

Bloomberg of all people should know that attitude won't fly. City Council Speaker Christine Quinn, usually a staunch ally of Bloomberg's, recently declared that she has the votes to override the veto on the NYPD oversight bill. And if the legislation running through various states right now is any indication, it's not hard to imagine a scenario where Bloomberg, embracing a drone-infested surveillance state for what remains of his term, will find himself in the minority. Transparency, at very minimum, needs to be a two-way street — not an ever-present, top-down panopticon.