The Nexus 4 is an attractive phone, but it's got a pretty big design flaw: the glass back of the phone is exceptionally slippery and causes the phone to slide off of most surfaces you place it down on. This can lead to catastrophes such as scratched or even cracked backs, not to mention the annoyance of it repeatedly falling off of your desk. The official bumper case that Google sells does solve this issue (and I actually purchased one specifically because of the problem), but it adds bulk to the phone and makes it less comfortable to use in one hand.

It seems that Google was well aware of the issue, however, as some four months after the phone's initial launch, the company has slightly altered the design of the rubber border that surrounds the phone. First reported by Nexus 4 owners last week and confirmed by German website MobiFlip, new versions of the Nexus 4 now have small nubs on the rubber surround, which serve to lift the whole phone off of a surface and prevent it from sliding around like a bar of soap. Additionally, Android Central reports that the nubs also let the rear speaker breathe a bit, providing louder volumes when you are playing audio through it. Apparently, though they are quite small, the nubs are noticeable when you hold the device, but not as much as an external case is. Other tweaks include a slight change in the border surrounding the camera, though that doesn't seem to affect functionality.

Unfortunately for those of us that already have purchased the Nexus 4, this design update won't help us out all that much. But new customers may want to wait until they receive their phones before plunking down $20 on the bumper case if they are worried about the Nexus 4 sliding off of a desk. 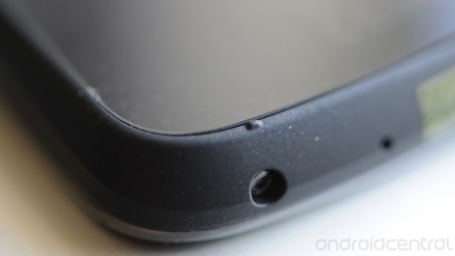