After moving on from the Halo franchise, studio Bungie announced a new project in February of this year. Called Destiny, it combines first-person shooter mechanics with more MMO-like qualities, asking players to help protect the last remaining city on Earth in the far future. While we've already seen a little of the world and gameplay in Bungie's previous announcements, the creative team behind Destiny has taken to GDC to reveal a little more about the world they hope players will want to inhabit over the coming decade.

"A dark army dreams of conquest and corruption — but I'm not allowed to talk about that."

The overwhelming feeling you get from Destiny's concept art is that while Bungie is sticking with the interplanetary warfare that has served it so well, it's consciously trying to cut loose from a purely sci-fi framework. The designers say they originally wanted a fantasy setting for its mythological depth; later, they moved to "a genre that we called mythic science fiction." Granted, the distinction between science fiction and fantasy is often one of presentation, not content; in this case, mythic SF is a catch-all that describes anything sweeping and ornate, whether it involves technology or magic. "Imagine you're exploring an abandoned moon base," one of the designers says, "when you start seeing lights from fissures in the ground." Following the lights, you find "a giant alien hellmouth" in the lunar surface, "where a dark army dreams of conquest and corruption — but I'm not allowed to talk about that."

Inside that world, you'll find a lot of familiar fantasy and SF archetypes. Besides humans, the game will include classes like the "Awoken" — a race of exotic, ethereal beings represented on slides by both an elf and Edward Cullen — and the "Hive," which will include the "undead royalty" seen above. Within these groups, you'll find bounty hunters, Master Chief-like soldiers, and warlocks: "Who doesn't want to be a space wizard? No one!" There were also apparently plans to include what's described as a "noble, bestial, and wild Tiger Man," who was cut after nobody could quite figure out what to do with him. 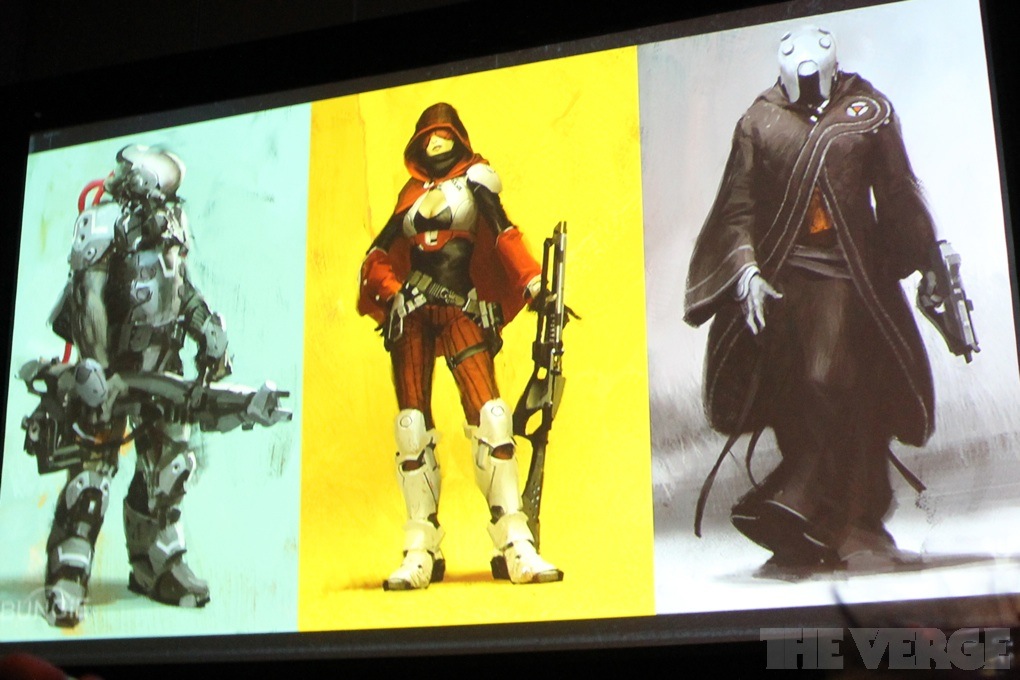 We're still not sure when Destiny will be coming out, nor do we really know how it will play or look outside of this concept art and some short video clips. What's described, though, is a heady blend of Silver Age sci-fi, meditative art films, westerns, and epic fantasy. Tarkovsky's desolate and otherworldly films Stalker and Solaris get a mention, as do The Time Bandits and The Good, the Bad, and the Ugly. "Our whole solar system — treating it like a frontier seemed really cool," we're told. By the time anime art starts coming up in the slide deck, it starts to feel like listing the things that weren't influences might have been quicker.

Besides giving us some lovely art, which can be viewed in more detail at Polygon, the designers are clear on trying to show audiences a new side of Bungie. The team frequently talks about avoiding themes that seemed too strictly science fictional, or too similar to traditional space opera. At one point, two designers recount a disagreement over what a piece of concept art showing light leaving a figure meant. Though it was initially described as someone's "soul ripping out," they worked through a scientific explanation for an energy-based being losing its life suddenly — then decided they were really just creating a complicated description of a soul. "That's his soul ripping out of his body. And that's not the kind of thing you can easily fit in a Halo game, or into a modern military shooter."