Russian photographer Vadim Makhorov caused quite a stir this week when he published a set of stunning images captured from atop Egypt's Great Pyramid. The photos, posted to Makhorov's LiveJournal page, provide a rare view of one of the Seven Wonders of the Ancient World, though they've fueled a fair bit of controversy, as well.

Once the pyramids complex had closed to tourists, Makhorov and his two friends, Vitaliy Raskalov and Marat Dupri, staked out for nearly five hours, hiding themselves from Egypt's armed guards. Once the coast was clear, they embarked on a 481-foot climb to the top of the pyramids, where they captured sweeping shots of the Giza Necropolis, while avoiding the sights of the guards below. According to Raskalov, the trio would have faced between one and three years in jail, had they been caught.

"We didn't want to insult anyone. We were just following the dream."

The images evoked reactions of awe and intrigue, though some have expressed concerns over how easy it was for Makhorov and his friends to access one of the world's oldest, and most fragile artifacts. Makhorov noted that he and his friends weren't the first to illegally scale the building, citing inscriptions in Arabic, French, and Russian that they found along their ascent, though he apologized for the stunt in an e-mail to CNN.

"I've always been drawn to Egypt," he wrote. "For as long as I can remember my dream was to get to the top of the Great Pyramid of Giza."

"We didn't want to insult anyone," Makhorov continued. "We were just following the dream." 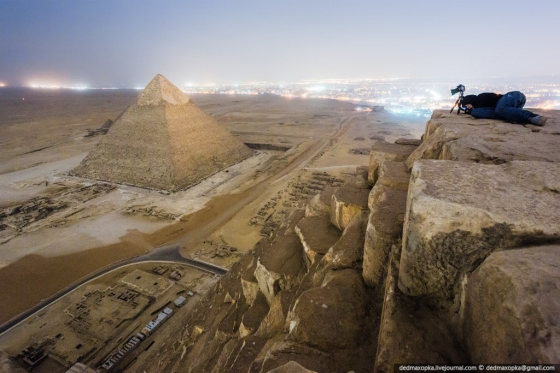