Redbox clings to the dying DVD, and it could pay off

Redbox clings to the dying DVD, and it could pay off

Netflix is winning, but local kiosks could still be the ace up Redbox's sleeve

In 2008, five years ago, Netflix CEO Reed Hastings said that the DVD market would peak in five years. It was a sendoff for his newest venture — Netflix Watch Now, a service that streamed movies free of charge to anyone paying his company for a mail-order DVD subscription. It almost seems quaint now to think of Netflix primarily as a distributor of optical media, but that was the truth until just a few years ago. The company was born in 1998, and thrived for nearly a decade on the strength of the DVD alone.

In the streaming realm, Netflix is far ahead

Now, rivals Redbox and Verizon are hoping those optical discs have enough life left to challenge Netflix's throne. On March 14th, the companies publicly launched Redbox Instant, a combination of streaming and physical discs. For $8 a month, Redbox gives you four DVD rentals from any of its 38,500 local kiosks in the United States, along with unlimited access to its full streaming library. It’s a page right out of Hastings’ playbook — in 2007, Netflix added a mediocre catalog of streaming video on top of a strong DVD-by-mail service to get the streaming catalog off the ground, and now Redbox is offering a similarly iffy collection of streaming films on the back of its existing business.

Needless to say, in the streaming realm Netflix is far ahead. In the US, its service is everywhere, available to every computer, every game console, most smartphones and tablets, and nearly every internet-connected TV and set-top box that ships. The catalog might not have any given film or TV show that you might search for, but there’s plenty to watch, including genuine hits.

By contrast, right now Redbox and Verizon’s streaming service is a wasteland, masking just how few films it has by interspersing them with duplicate listings, as well as movies that you’ll have to purchase separately or drive to a kiosk to rent. Recent popular films available on Redbox Instant like Rango, Hugo, Thor, The Lincoln Lawyer, and Morning Glory are the exception rather than the rule. If there’s a recommendation engine, it’s certainly not working right: a search for "Casablanca" suggested Dredd, Alex Cross, four thrillers, and a Nickelodeon flick, and none of those seven suggestions were available for streaming. Service quality also isn’t quite at Netflix level. While Redbox certainly streams in HD, I noticed quite a few stutters, some gunky compression artifacts, and even places where movies would skip ahead on occasion. It’s not worth the money right now.

And yet, I wouldn’t count Redbox and Verizon out, because the very problems it faces are ones that Netflix has already solved or is solving as we speak — and those optical discs from kiosks give Redbox Instant audiences that Netflix simply can’t attract in its current form.

In July of 2011, Netflix decided that its streaming service was worth paying for all by itself, deciding to nearly double the cost of a combined streaming and DVD plan to $16 a month. That’s the price it is today. For the same $8 you’d pay to get Netflix streaming alone, Redbox offers four DVDs, or four Blu-rays for a dollar more. (At the kiosk, Redbox charges $1.20 per day for a DVD or $1.50 for a Blu-ray, so you’re paying roughly $3 a month for streaming on top.) But the most compelling part is the convenience factor: where Netflix’s discs have to travel through the mail and its streaming films are older and subject to my internet connection’s whims, I can pick up a crisp 1080p Blu-ray at my local supermarket or 7-Eleven while picking up groceries shortly after it hits retail. Redbox apps for iOS and Android can let me know which movies are available ahead of time and reserve them if I care, and Redbox Instant credits make that even easier. If you swipe the same credit card on your account at a physical kiosk, the system will recognize you and let you apply credits right away.

In July, I abandoned Netflix for those convenience store discs, although I eventually crawled back to binge on the likes of Breaking Bad, House of Cards, and The Walking Dead. But disgruntled Netflix subscribers like me aren’t the only audience Redbox can attract, because the low price and retail presence of Redbox attract an audience that may have never considered paying for a monthly subscription. While Netflix relies on word of mouth and device partnerships to sell plans, Redbox kiosks serve as living advertisements, physical reminders that you can quickly spend a couple bucks for a movie — say, one you just barely missed in theatres — with very little hassle. There’s an element of serendipity there. And if you get into the habit of doing that a few times a month, why not add a few streaming movies on top? That’s the kind of thinking that Redbox is counting on. 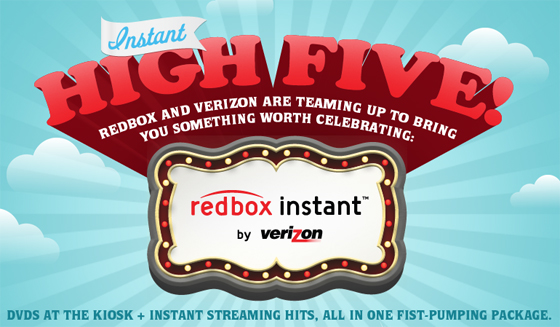 Redbox is the only player with a physical presence

While Redbox and Verizon’s streaming service has some catching up to do, Netflix has paved the way by securing content deals, spooling up original programming, and pushing its service to every device under the sun. Redbox Instant already runs on iOS, Android, and Xbox 360, and Verizon could potentially see its way to putting the service on Verizon FiOS set-top boxes. Content deals should be easier now that companies like Netflix have figured out the licensing legalese, particularly for the exact same content that other providers have already negotiated for. It seems that Redbox is also considering original programming like Netflix’s House of Cards. The hardest part was convincing the industry that streaming could make money for Hollywood, and Netflix is an ally, not an enemy there.

Of course, neither Netflix nor Redbox are alone in that regard: that particular rising tide floats other boats as well. Amazon Prime Instant Video has its own compelling play: if you buy lots of goods on Amazon, it’s a no-brainer to pay for Prime and get your streaming video as an added bonus. If you’re entrenched in Apple’s ecosystem, you might buy your movies and TV shows there. Hulu hooks you with a compelling starting price of "free."

But by relying on the technology that Netflix spurned too soon — the humble disc — and making it available from a kiosk just a few blocks away, Redbox is the only player with a physical presence. That might give it a window of opportunity to make a real place for itself in the market before the DVD is truly dead.