How smell might be the next big thing in advertising

Smell-O-Vision may be coming to a billboard near you

A team of Japanese researchers has been working on developing a new system, the "smelling screen," that releases scents into the air with directional accuracy. Augmenting our audio-visual experiences with odor isn't a new idea — theaters experimented with the concept several times between 1906 - 1960. Perhaps most famous of these pilots is Smell-O-Vision, which was used (without much success) in three theaters for the movie Scent of Mystery in 1960.

Later, scratch and sniff was invented as a far cheaper way to generate scents. Only one film-maker truly embraced the technology, but in recent years advertisers have been using it to promote their wares. The deluxe edition of Katy Perry's Teenage Dream smelled like cotton candy, and games like Fifa 2001 and Gran Turismo 2 simulated the smell of turf and burning rubber, respectively, with a simple scratch. Apart from these experiments, there aren't many examples of odor successfully taking hold in either entertainment or advertising. Why will this new invention be any different?

The smelling screen is a regular television with four fans mounted along its edges that pump odors in the right direction. It generates scent from hydrogel "aroma chips," which are heated to produce vapor. Using the fans at varying rates, the system can purportedly give the illusion that a scent is coming from a certain place on the screen. It's this directional accuracy that sets the smelling screen apart from systems in the past. The researchers have only been able to generate one odor at any given time so far, but hope to develop cartridges with multiple scents that can be swapped out for different movies and programs. 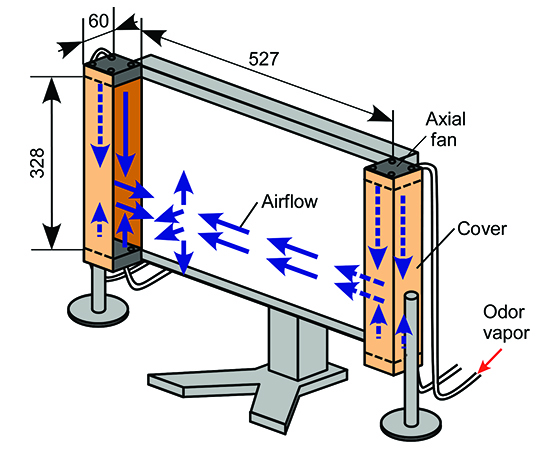 The team faces a huge challenge to get their system into homes — persuading manufacturers to incorporate fans, heating pumps, and odor cartridge slots into their televisions is a big task. But just as scratch and sniff transformed from a cinematic experience into an advertising gimmick, the smelling screen may find a home in marketing. In a paper presenting the research, inventor Haruka Matsukura points out that bakeries, popcorn stands, and other food retailers already utilize scent to attract customers. Matsukura's displays, if proved to be reliable, could represent a powerful new tool for advertisers, who have been looking into similar tech for some time. Think it's difficult to resist that Cinnabon now? Imagine being bombarded by the smell of it every time you walk past a billboard.