Samsung Ativ Odyssey review: do we need a third kind of Windows Phone?

Verizon Wireless hasn’t been the best partner for Microsoft and Windows Phone — it had one humdrum Windows Phone 7 device back in 2010, and opted out of Windows Phone 7.5 entirely. But it’s offering a spread of devices for Windows Phone 8, including the high-end HTC Windows Phone 8X and lower-cost Nokia Lumia 822. We’ve already reviewed the 8X and Lumia 822, both of which are decent, but unspectacular smartphones.

As is common practice for Verizon, the carrier likes to spread its smartphone options across various price points. Right now, Verizon is offering the 8X to new customers for $99.99 with a two-year agreement (a $100 drop from its launch price), while buyers can walk out the door with a Lumia 822 for nothing so long as they sign that new two-year contract. Verizon’s third option, the Samsung Ativ Odyssey, neatly fits in between those two devices: it’s priced at $49.99 with a new contract. But Windows Phone isn’t quite the same as Android — we’ve seen cheaper hardware offer similar performance to more expensive phones. Does the Odyssey continue that trend, or is it something entirely different? I spent some time with one to find out.

Give me $50 worth of Windows Phone, please 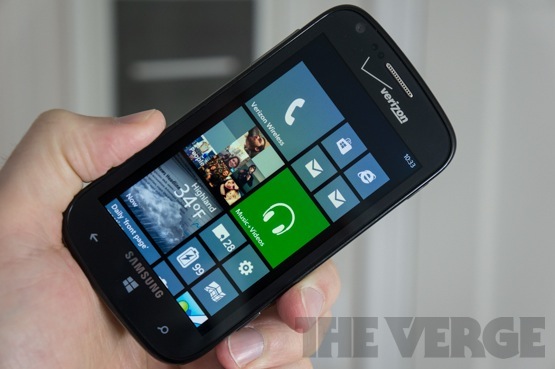 The Odyssey is considerably smaller than the 8X or the 822. It’s a bit shorter and wider than the iPhone 5, but safe to say, it’s dwarfed by most of the smartphones on the market. That makes for a great one-handed experience, as I didn’t have to struggle to reach all corners of the display. But at the same time, the Odyssey’s small 4-inch display and low 480 x 800 resolution does make for a much more cramped experience than the 8X or 822, both of which have larger displays or higher resolutions. That translates into more scrolling with the Odyssey than what’s needed with the other phones. The Odyssey’s display is otherwise good — it’s bright and colorful, and has deep blacks and wide viewing angles. It doesn’t posses the 822’s neat trick of being usable with gloves on, but then again, not many phones do.

Unfortunately, unlike the quite attractive 8X, the Odyssey’s cookie-cutter rounded rectangle design and multi-toned finish won’t win any beauty awards. It also feels as if the phone is a bit thicker than it needs to be, and Samsung’s traditional glossy plastic materials feel cheaper than the more solid plastics used by HTC and Nokia.

The other big hardware difference between the Odyssey and Verizon’s other Windows Phone devices is in the camera. The 8X and 822 both offer 8-megapixel shooters (the former with HTC’s ImageSense chip), but the Odyssey has a lower-specced 5-megapixel camera. Megapixels aren’t everything when it comes to cameras, but the Odyssey’s low-end shooter let me down in low light, and the LED flash was all but useless in making up for that. The Samsung lacks the "lenses" available to the Nokia in the camera app, small add-on apps that let you make cool cinemagraphs, among other things — you do have the option to add lenses from the Windows Phone Store, but don’t expect them there out of the box. 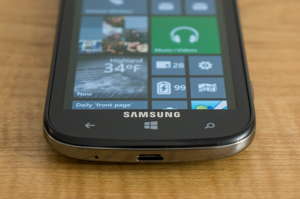 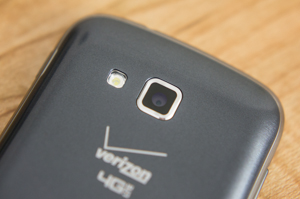 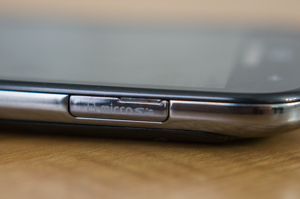 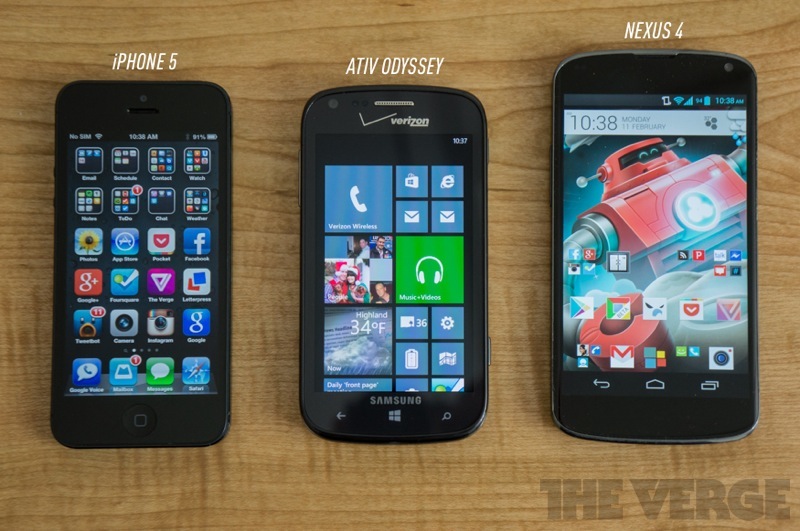 The Odyssey runs the latest version of Windows Phone 8 (called "Portico"), and I’ll direct you to our prior review of the platform for the nitty gritty details on the OS. Samsung has also included a handful of apps out of the box, including its Now hub for weather, news, and information; a basic Photo Editor that offers tweaks like filters and enhancements; and the Mini Diary note taking app that apes much of what Evernote offers. In addition, there is the usual smattering of Verizon bloatware, such as NFL Mobile, My Verizon Mobile, Verizon Voicemail, and VZ Navigator. Fortunately, Windows Phone makes it painless to uninstall those if you don’t want them. The Odyssey also supports Microsoft’s Data Sense feature, which is designed to limit cellular data usage with some behind the scenes magic and alert users when they are close to or going over their monthly data limit.

Unfortunately for Samsung, the Odyssey’s software options are much less compelling than the 822. Nokia has invested a lot into developing apps for its own Windows Phone devices, and apart from the recently-released Nokia Drive+ Beta, the Samsung doesn’t have access to any of them. 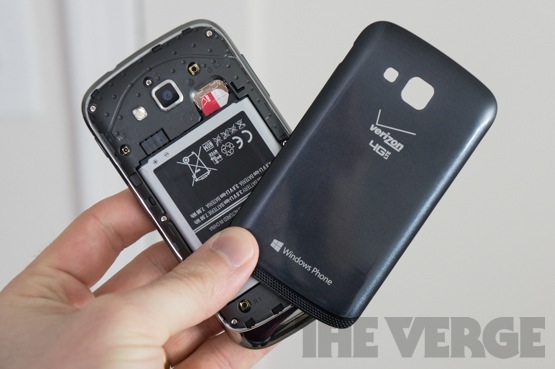 I’ve used Windows Phone 8 briefly a number of times, but my time with the Odyssey was the first chance I had to live with the OS for an extended period. Microsoft certainly has made advancements with the platform — I really like the ability customize the Live Tiles on the Start Screen with various sizes tiles and multitasking is certainly improved — but I still get tripped up by the company’s decisions elsewhere. The People Hub still feels just as lacking as it did in Windows Phone 7 and Windows Phone 7.5, and the fact that the phone’s search button isn’t contextual within apps (it always just searches on Bing) drives me nuts. That’s not to mention the app situation, which is still lacking despite Microsoft’s efforts in boosting total numbers of apps in the Windows Phone Store. And while Microsoft has focused a great deal on speed and HTML5 compatibility in the new Internet Explorer 10, the fact of the matter is that WebKit currently rules the mobile web and IE10’s lack of support is a hindrance and an annoyance.

The Samsung has the same 1.5GHz processor and 1GB RAM configuration as both the 8X and the 822, and while testing, I didn’t notice any major performance issues with it — Windows Phone 8 seems to work essentially the same across different levels of hardware. The phone’s interface is snappy and responsive, and most apps were fast enough to not get in my way. There were times I wished certain apps would resume faster than they did — that still seems to be a sticking point for third-party apps — but that's something that most Windows Phones suffer from as well. The Odyssey doesn’t have as much internal storage as the other phones (8GB vs. 16GB), however, so you’ll probably want to make use of the microSD card slot to expand it.

The Odyssey’s 2,100mAh cell was able to power it through a full day of use without much issue, even when I was taking full advantage of Verizon’s speedy LTE network. The battery can be swapped for a fresh one when it does run out, unlike the sleek 8X. 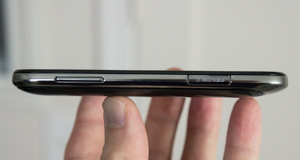 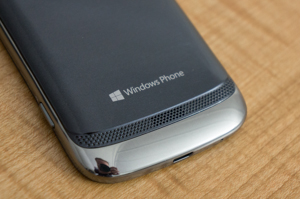 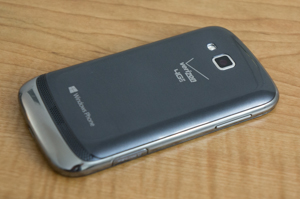 There are better phones for more money, and for less money

The Odyssey is a good illustration of what your money buys you in a new Windows Phone. As we’ve seen, it’s not so much performance — Windows Phone 8 does just as well with inexpensive hardware as it does with the premium goods — but fit and finish, build quality, and the quality of the phone’s display. For a little bit more money than the Odyssey, you can get the Windows Phone 8X, which has a much nicer display, better camera, and much nicer hardware. Or, in an ironic twist of fate, you can get the Lumia 822, which offers everything that the Odyssey has, but also adds a better camera, bigger screen, more internal storage, and more software features for less than you would spend on Samsung’s phone. Either way, the evidence shows that you should probably shop around rather than committing two years of your life to the Ativ Odyssey.