Microsoft's Kinect sensor may soon be integrated in a TV or laptop in the future. Speaking at Microsoft's TechForum in Seattle this week, Craig Mundie, senior advisor to the CEO, revealed where Microsoft is looking to take Kinect. The software giant recently unveiled a new envisioning center at its campus, complete with a host of Kinect-powered demonstrations. During my own look at the center, virtually every demo took advantage of the Kinect sensor in some shape or form.

"It's not gonna happen tomorrow, but we can see a path towards that sort of thing."

Microsoft's goal in research is to miniaturise Kinect, says Mundie. "You want to be as cheap as possible and physically as small as possible," he explains. "My dream is to get a Kinect into the bezel of something like this [Surface tablet]." Mundie's dream might not be a distant one either. Answering a question on whether we'll see Kinect embedded into laptops soon, Mundie says he believes that will happen eventually. "It's not gonna happen tomorrow, but we can see a path towards that sort of thing." Microsoft has integrated its Kinect sensor in a range of screens at its envisioning center. The sensors appear to be thinner and smaller than existing ones, but a company spokesperson refused to say whether we were looking at Kinect 2 or not. 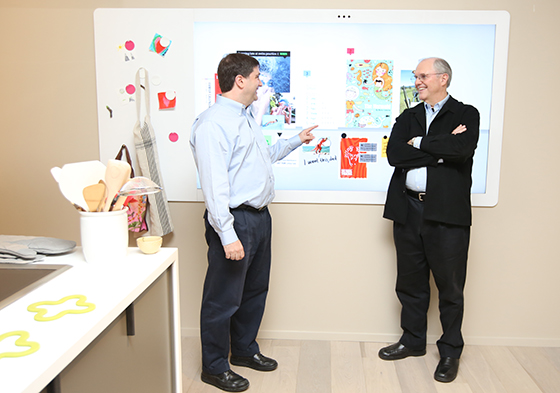 Although Microsoft is taking the step of integrating Kinect into devices, Mundie believes there are a number of challenges in bringing this type of technology to a laptop or tablet. The Kinect sensor doesn't work in daylight so that limits its use somewhat. "It turns out it's infrared so when you go out in the sunlight the sun is a big infrared source that drowns it out," he explains. "There's a whole bunch of problems, not just miniaturisation, in designing the sensors so they actually do what you expect them to do in all of the environments.

It's clear Microsoft faces some challenges to bring Kinect to other devices and form factors, but its work on Kinect for Windows shows that the company is looking at additional scenarios for close interaction with the sensor. Previous rumors speculated that Microsoft was working with Asus to build Kinect-equipped laptops, but no such hardware has emerged just yet. Microsoft might not be as close as many would hope, but its commitment and focus on Kinect suggests it won't give up until a sensor like this is in every device possible.