Roku 3 now available for $99.99 with private listening and improved interface

Roku 3 now available for $99.99 with private listening and improved interface

When it comes to the "indies" of set-top media streaming boxes, Roku has been at the front of the pack for some time. The company tells us that it essentially splits 90 percent of the US market with Apple, thanks no-doubt to its relatively diverse product line and licensing agreements. Today, the company is improving that line up a bit with a new puck that replaces the somewhat-confusingly positioned Roku 2 XS, the Roku 3. Priced at $99.99 and available now, the Roku 3's main differentiator is a clever one: there's a headphone jack in the remote control that automatically routes all audio over Wi-Fi when you plug in a pair of headphones. The "enhanced remote" also has a pair of volume buttons, but otherwise is unchanged from its predecessor — it still does motion control for games.

The Roku 3 is slightly curvier and only the tiniest bit smaller than the Roku 2 XS, and inside there's a slightly improved processor that speeds things up but doesn't enable any new functionality — at least for now. It kicks out up to 1080p video over HDMI and now supports dual-band Wi-Fi a/b/g/n.

Along with the new puck, Roku is introducing a completely revamped interface that's much easier to navigate than what it had before. In place of a giant list of horizontal icons, the new Roku interface opts for a right-left split of navigation and selection. The new interface won't turn many heads, but it does a nice job of giving you a spatial sense of place within Roku's various navigation trees. 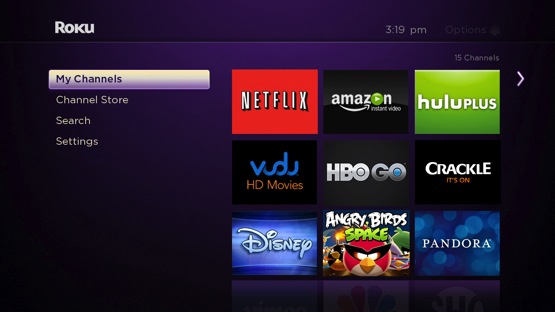 Clicking into a righthand menu turns it into a lefthand menu, for example, sliding it over and giving you the drill-down details in a new view. Overall, it means that you can see more available content in a single screen and navigate to most of it with fewer clicks. The ads are still here, though, and they're bigger than they were on the previous interface, but thankfully they're not very intrusive. Roku has also done a bit to improve search and also introduced new (and somewhat extraneous) theming options.

TV works best when it's simple

We tried out the Roku 3 for a short time and, well, it's a Roku: it simply streams content and just as simply switches the audio to your headphones when you plug them in. Navigating was a major improvement over previous versions, with the new processor pushing shows and channel descriptions about as quickly as the internet could serve them up. That may seem like damning it with faint praise, but a TV experience works best when it's simple and straightforward.

It's almost surely not worth the upgrade for current Roku users — especially since Roku will be disseminating the new interface to "current-generation Roku devices" as a software update this April. For those debating between the Apple TV and the Roku, though, there may be enough here to make you think twice about how badly you want to participate in Apple's iTunes ecosystem. It's currently available for purchase at Roku's site and on Amazon, it will hit retail stores in April.