This $10 tripod mount holds your phone by its headphone jack

Share All sharing options for: This $10 tripod mount holds your phone by its headphone jack

Another day, another ingenious Kickstarter accessory. Jackpod aims to replace the countless phone-specific tripod mounting kits with a 0.2-ounce piece of plastic. On one side of the mount is a universal tripod mounting port, and on two of its other sides are plastic jacks that plug into your phone's headphone port. These two ports allow you to connect your phone in either landscape or portrait mode. It's an extremely simple idea, but we can't find another mounting system that does the same. 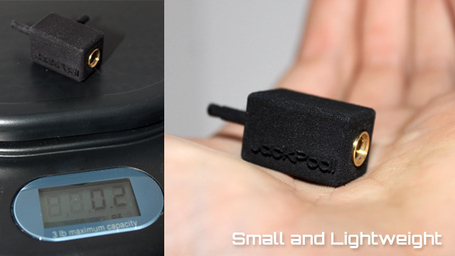 The major issue with Jackpod's solution is stability — its creator says the plastic jacks are extremely durable, but notes that you'll need to use your phone's shot timer for best results. Another potential issue is orientation — depending on your model, you may need to insert your phone the wrong way around. Not all mobile camera software is able to rotate 360 degrees, so you'll be forced to shoot those portrait photos and videos upside-down and correct them later. We'll have to wait to see how well the Jackpod works in practice, but even with those issues you'll only be paying $9-$10 (depending how early you pledge the cash) for a tripod mount that should be able to house any modern phone. A Kickstarter campaign to fund the mount started a few days ago, and the Jackpod is almost 25 percent funded already. The campaign will end on April 3rd, by which time there'll need to be $16,500 worth of orders for the project to go ahead.