As the dance craze passes its saturation point in the US, it's evolving into a political rallying cry in Egypt and Tunisia

For most people, the words "Harlem Shake" evoke images of arrhythmic hip thrusts, ridiculous costumes, and cringeworthy choreography. But for Mahmoud Tabei, the irrepressible internet meme carries a far more meaningful connotation. Tabei, 17, is one of many young Egyptians who have begun producing "Harlem Shake" videos not for LOLs or viral fame, but as a means of peaceful protest against his country’s conservative Islamist government.

Late last month, he and three other friends formed the "Satiric Revolutionary Struggle" — an opposition group devoted to making political statements through humorous demonstrations. Their first order of business? Shooting a "Harlem Shake" video outside the Muslim Brotherhood’s Cairo headquarters.

"We were tired of the protests and the blood and the martyrs," Tabei says. After months of political unrest, Tabei says he and his friends see the "Harlem Shake" meme not only as a platform for their message of reform, but as a way to "raise the hopes and spirits" of an increasingly frustrated opposition movement.

Tabei isn't alone, either. As the nonsensical trend passes its saturation point in the West, it's evolving into a distinctly more political phenomenon in both Egypt and Tunisia, where students and opposition movements have re-appropriated Baauer's bass-heavy anthem as a rallying cry for reform — much to the chagrin (and perhaps befuddlement) of conservative authorities.

"an insult to the educational message."

The transformation from meme to message began late last month, when Egyptian police arrested four pharmaceutical students for publicly recording a "Harlem Shake" video in their underwear — an act that officials from Egypt’s conservative ruling party described as "scandalous." A similar controversy erupted in Tunisia just days later, when education minister Abdeltif Abid promised to launch a vigorous investigation into a "Harlem Shake" video filmed at a high school in Tunis. Threatening swift punishment for those responsible, Abid condemned the act as an "insult to the educational message."

As is so often the case, though, these crackdowns have only fanned the flames of discontent, emboldening progressive-minded youths to produce even more "Shake" videos, while underscoring the profound social divides that threaten to derail two of the region's most fragile democracies.

In Tunisia, Abid's condemnation was widely interpreted as a symbol of the country’s gradual shift toward hard-line Islamic fundamentalism. Secularists and ultra-conservative Salafist Muslims have been at odds ever since early 2011, when the Arab Spring revolution forced then-President Zine El Abidine Ben Ali to flee the country.

Today, the government is led by the moderate Islamist Ennahda party, though many still criticize its leaders — including Abid — for tolerating, or even aligning themselves with extreme Salafist interests. Radical Salafists sparked outrage in June, when they destroyed "blasphemous" artwork at a Tunis gallery, and again in February, when members of the sect were charged with the murder of opposition leader Chokri Belaid.

an ideological tug of war

Egypt, too, remains bitterly divided along ideological lines. Its current president, Mohammed Morsi, ascended to office last June, in Egypt's first election since the resignation of longtime leader Hosni Mubarak. Yet despite promises of democratic-minded reform, the Morsi government remains littered with Mubarak loyalists, and his ruling Freedom and Justice Party — an Islamist coalition led by the staunchly conservative Muslim Brotherhood — has been entangled in violent clashes with secular activists over the consolidation of presidential power.

Considering this moralistic tug-of-war, then, it's no surprise that "Harlem Shake," with its grind-friendly bassline and sexually suggestive choreography, would cause such a stir among traditionalist leaders.

This isn't the first time that an internet meme has been appropriated as a tool of protest — in January, a group of Chinese construction workers staged a Gangnam Style dance in protest over unpaid wages — but the demonstrations of recent weeks have unfolded on a notably larger scale.

To date, variations on the meme have surfaced in just about every country across the Middle East, from Algeria to Yemen; yet only in Egypt and Tunisia have they been squarely directed at political leaders. And only in these countries have they been met with such highly publicized controversy — and, in some cases, physical confrontations.

Dancing Mania, on an internet scale

When a group of students tried to stage their own "Harlem Shake" last month in Sousse — a city some 75 miles south of Tunis — their principal called the police who, according to an interior ministry spokesman, had no choice but to "respond with tear gas." Others in Tunisia have had their demonstrations met with counter-protests from radical Salafists, with some reportedly chastising the youths for dancing while "our brothers in Palestine are being killed by Israelis."

Indeed, it almost seems as if the "Harlem Shake" phenomenon is the Middle East’s equivalent of Dancing Mania — an inexplicable European craze that sometimes saw thousands of people simultaneously dance to the point of exhaustion between the 14th and 17th centuries. At the time, some attributed the behavior to religious cults or curses, though it is now characterized as a mass psychogenic illness, driven by snowballing social influence rather than any real physical ailment.

Authorities in Egypt and Tunisia appear similarly confused about how to handle this year's "Harlem Shake" outbreak. Whereas officials in Tunisia responded with seemingly knee-jerk police force and threats of legal action, Muslim Brotherhood member Ahmad al-Mogheer this week took a more curious route, releasing his own "Shake" video in retaliation.

Perhaps some of this confusion can be attributed to the comparatively inscrutable nature of the meme itself. Egyptian belly dancer Sama El Masr sparked similar controversy last year, with a series of videos in which she openly criticized Morsi and the Muslim Brotherhood. Although some "Harlem Shake" demonstrators have donned masks of loathed political leaders, other performances have been as chaotic and nonsensical as the song itself, lacking a coherent message for authorities to latch onto.

"it's detracting from the larger conversation that needs to be happening."

But for Tabei and others, the medium — no matter how ridiculous — is a big part of the message. "Look, dancing in the street is something abnormal in Egyptian society," Tabei told The Verge. "It is not in our tradition. People say it is morally bad — 'Oh, that’s un-Islamic!' So that’s why we chose 'Harlem Shake,' because it’s this kind of behavior that the Muslim Brotherhood and Salafists consider haram [forbidden by Islamic law]."

The obvious risk, of course, is that in using such a trivial medium, Tabei and other reform advocates threaten to dilute, or detract from their underlying cause — a phenomenon that’s already unfolding in Tunisia, according to Nura Suleiman, an American alumni coordinator at the Center for Maghreb Studies in Tunis.

"It's interesting to see how 'Harlem Shake' has evolved," Suleiman explains. "At first, there seemed to be a genuine fascination with it, and there were all these websites devoted to the various renditions. Now, some people are beginning to think it's kind of frivolous, and that it's detracting from the larger conversation that needs to be happening around freedom of expression." 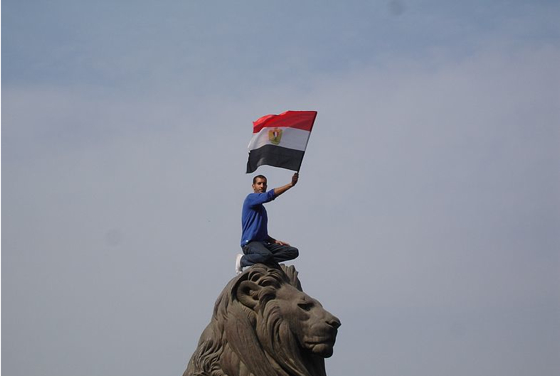 But the tactic could also put Tabei and other activists in an advantageous position, as far as the media is concerned. For the Brotherhood, responding to dancing teenagers with physical force certainly wouldn't make for great front-page headlines — something Egypt's Shakers are keenly aware of.

Ultimately, though, Tabei remains realistic about the chances of a viral video resulting in any substantive change. After having already seen seven of his friends killed since the beginning of the Arab Spring, the teenager is markedly disillusioned with his country's revolution. Publicity aside, he says a fundamental goal of his group’s "Harlem Shake" movement is to simply build morale — a way to "refresh our minds in order to continue with our larger struggle."

What shape that struggle takes going forward remains unclear, though Tabei says their next stunt won't rely so heavily on viral video or quirky internet memes. Instead, the Satiric Revolutionary Struggle will hold a marathon in Cairo, beginning at the headquarters of the National Democratic Party — the now-defunct party of former President Mubarak — and ending at the Muslim Brotherhood's headquarters.

It’s a path meant to symbolize Egypt's political trajectory from Mubarak to Morsi. Its message, according to Tabei, should be clear: "They are the same. Nothing has changed."