'Well, that's our first murder of the night': watching an election from halfway around the world

All the chaos, violence and corruption at Kenya's polls is captured in one real-time map

Share All sharing options for: 'Well, that's our first murder of the night': watching an election from halfway around the world

I arrive at Ushahidi’s DC office a little before 7PM Eastern Standard Time, Sunday night. In Nairobi, that's 3AM Monday morning, just three hours before polls open on the first Kenyan election in five years. They've been tracking reports all night, although so far, there isn't much election news. The biggest report is a stabbing in Mombasa — after that, a lot of spam. When a text comes through about a threat of ethnic violence, the team clicks a few buttons and it pops up as a pin on the map, a real-time guide to Kenya's troubles for the night.

It's a map of every election-related incident in the country, far more than a newspaper could handle

It's called Uchaguzi, Swahili for "election," a map of every election-related incident in the country, far more than a newspaper could handle. Behind the site, there's the company: Ushahidi, a Kenyan crisis-mapping platform and recent darling of the global aid scene. It was founded in the aftermath of the last election, which descended into ethnic violence and left hundreds dead — so it's taken a special interest in keeping things peaceful this time around. For the past five years, Ushahidi has been developing the software that powers this map and building the partnerships to keep it populated. And for the past month, the staff has been prepping the site and furiously training volunteers, preparing for the most ambitious deployment yet. By now, that adds up to over 200 volunteers, based everywhere from Cameroon to San Francisco to Seoul. Some are geolocation experts; other will work translating texts from Swahili to English. None of the volunteers are getting paid, but they know why they're here.

And in the DC office, as I walk in, there's Heather Leson, who's been charged with keeping the non-Kenyan staff working. She has fuschia hair (think Scott Pilgrim) and at least 20 stickers for various open-source projects on the back of her MacBook. By now, she's been working for 12 hours straight. The day before, it was 19 hours, and she doesn't expect to sleep much tomorrow night either. Some well-meaning volunteer in the UK has been deleting positive reports — saying, for instance, that the ballots have arrived without incident — which threatens to knock the analytics out of whack unless someone fixes it. Even though voting hasn't started yet, the site has already gotten just under 2,000 reports, all of which need to be translated, geolocated and verified. And at some point, she should eat something.

"Well, that's our first murder of the night."

"This is the first crisis map I've ever worked on where we have people actually in the field," she explains. That means if anyone sees an urgent report (usually involving ethnic violence or election fraud), the team can fast-track it to the geolocation team and have it processed in ten minutes. Then the on-the-ground team can tell the police what they've heard, and see if it checks out and if anything needs to be done. That means that when a ward representative is arrested in Bahati, the team can reach out to a local group called CRECO (Constitution & Reform Education Consortium) and make sure there's pressure on the police to let him go. It's the kind of small injustice that could easily get lost in the chaos of the election, unless there's someone keeping track of it.

Once the polls open, the site starts humming and Heather heads back to get some sleep, leaving me with Rob Baker, the U.S. tech lead. We order pizza and each crack open a beer. He'll be here until 4AM tonight, so he might as well get comfortable. It's morning in Kenya now, and the reports are mostly standard Election Day complaints: polls are opening late, workers are slow, lines are snaking around the block. Other stations are missing their voter registry, or asking for obscure forms of ID. There are ominous reports of families packing up the kids and leaving town, or lines out the door at grocery stores. "It's the kind of thing you see here before a storm," Rob explains. If there's trouble, they'll either be out-of-town or holed up with enough food to stay off the streets. So far though, the trouble hasn't materialized.

Rob glances back at the computer and stops smiling. "Oh…" The report is from Mombasa, a police constable killed at the Makupa station. Reinforcements have been sent to the area. Rob breathes in for a while and puts his drink down. "Well, that's our first murder of the night." 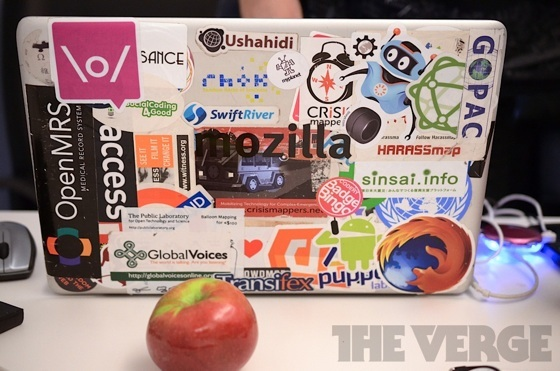 While Ushahidi has been building a platform, Kenya has been buying cellphones. Kenyans can send in reports to Uchaguzi through a web form, a tweet, or an app, but the vast majority comes in by SMS, for the simple reason that more people can do it. A full 70 percent of Kenyans owned a cell phone at the end of last year. That's over 30 million people, compared with less than 15 million during the last elections. In the last three months of 2012, Kenyans sent a billion text messages. 99 percent of the phones are cheap, prepaid models, but they can still text and take pictures, which is all Ushahidi needs. It could mean a huge shift in the power of the average Kenyan citizen, thanks to cheap phones and SMS-mapping. It's a shift that's happening in poor countries around the world, and if it works, it's a blueprint for changing politics with technology — but the proof only comes on election day. 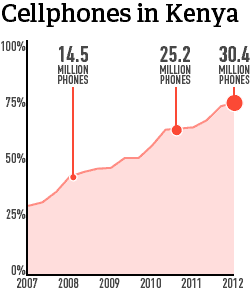 Based on that promise, crisis-mapping has become a buzzword among the global aid community, and the newfound money and hype have raised the stakes for projects like Ushahidi. Just last week, the McArthur Foundation announced it was giving Ushahidi $750,000 to continue its work, and plenty of other sites have gotten in on the action. Syria Deeply tracks refugees, while LRA Crisis Tracker follows the Lord's Resistance Army in Sudan. In Argentina, mappers are using the same tech to advocate for bike lanes and protect farmers. Because the software is open-source, the idea can travel faster than most.

Some think it's traveled too fast for its own good. In the run-up to the election, one crisis mapper took to her blog calling out the whole Kenya project as overkill. There were too many options, she said, and only some of them were partnered with local law enforcement. The average Kenyan wouldn't know who to call, and might do more harm than good. And even if they call the right number, what good is another police report without a policeman to respond to it? What if we're bearing witness to no one?

Ushahidi has faced many of these problems firsthand. "In Haiti, it felt like a 911 service," Rob tells me. "They would text, 'I need water' or 'I need better sanitation' and we didn't have the partnerships to get them the help they needed. And that's a problem." Ushahidi wasn't alone in finding the Haitian earthquake to be more than it could handle, but the lesson was clear enough. In Rob's words: "just because you have a hammer doesn't mean you can build a house." In Sudan, one deployment had to navigate a massive misinformation campaign and unprecedented levels of internet control. The project ended with the government shutting down the site at the ISP level. After Ethiopia started imprisoning journalists under a new anti-terrorism law, Ushahidi decided the 2010 elections were too dangerous to cover at all. A high-profile failure would cause too much damage, both to the project's reputation and to citizens on the ground. Now that it's in the spotlight, Ushahidi has to pick its battles. 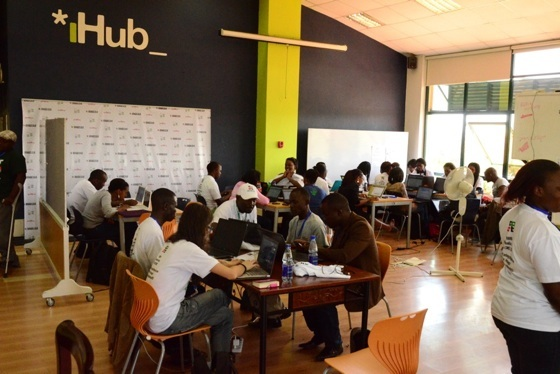 When I come in the next morning, there are 1,800 reports on the site by now, with just over 1,000 verified by the ground team. On the computer, Heather is monitoring twelve different Skype channels at once — each one handling a different wing of the project. Some of the volunteers have been on all night. In some cases, Heather has to kick them off, either because they're too tired or their nerves are so raw that they become disruptive. After 1PM, they start to trickle back on. Heather leaves to get coffee and comes back with four large cups in a carrier — four cups for two people. It's going to be a long day.

On Skype, volunteers are passing around links about compassion fatigue and digital PTSD

Another report crosses the wire: youths raid polling station; official hijacked; policeman dead. It's unverified, so there's still a chance it's not true. "I try not to think about the content of the reports too much," Heather says. It's too depressing, too stressful. "When you see something like that, how do you choose your priorities? How do you say, 'Oh, I'm going to take my lunch break now.'" Heather and Rob have to enforce each other's lunch breaks — otherwise they'd work straight through and burn out early. On Skype, volunteers are passing around links about compassion fatigue and digital PTSD. Most observers would say the troubles haven't been that bad — less violence than many expected, and nowhere near the cataclysm of 2008 — but when you're mapping everything, the incidents can feel overwhelming. That level of attention takes a toll.

At the same time, there's something thrilling about it. By the end of the day, the site has processed tens of thousands of reports and text messages. Nowhere else could you plow through that much information that fast. It's messy, it's stressful, sure, but maybe it has to be. "I don't think I've ever been in a real-time response situation that wasn't a shitshow," offered volunteer Nathaniel Manning, who was fresh off a term as a Presidential Innovation Fellow. "I mean, I was at FEMA during Sandy. This is way more manageable."

"I was at FEMA during Sandy. This is way more manageable."

And like any new technology, it's improving. Once the election is over, Uchaguzi's volunteer protocol will become part of Ushahidi's standard toolkit, deployed whenever there's a crisis map to be made. For the next edition, dubbed Ushahidi 3.0, Rob and the Kenyan team are going to rebuild the products from scratch, in true startup style. The people trained here will lead teams on the next round, whenever it comes. "The more people there are who can train someone else, the more leaders we'll have," Heather told me. "It's like The Starfish and the Spider. You want to duplicate and replicate as fast as possible." As long as there's momentum, why stop?

As the election wound down, so did Uchaguzi. Uhuru Kenyatta, currently under indictment by the International Criminal Court, had pulled ahead to a comfortable lead of 57 percent. The site had registered two armed clashes, three bombings and nearly 400 voting issues — not the peaceful, credible election Ushahidi had been aiming for, but nothing like the civil war many were bracing for either. Maybe having a map of the troubles helped? Or if it didn't, maybe it will next time.