Juicing the pyramid: is Herbalife an $8 billion house of cards?

Juicing the pyramid: is Herbalife an $8 billion house of cards?

Bill Ackman bets the vitamin maker is about to collapse, but not everyone agrees

Herbalife is one of the largest nutritional supplement companies in the world, employing some 5,000 people and working with nearly 2.7 million independent distributors in 88 countries worldwide. It sells more than six times the nutrition powder sold by GNC, Ensure, and Slim-Fast, combined. With a valuation of more than $8 billion, Herbalife is listed on the New York Stock Exchange competitively with such internationally known companies as Clorox, Energizer, and Church & Dwight, Inc. — the Fortune 500 company that manufactures Arm & Hammer baking soda, First Response pregnancy tests, and many of the most popular toothpastes on grocery store shelves. Clorox Company is a century old, Energizer was founded in 1875, and Church & Dwight got its start during the Mexican-American War in 1846. Herbalife, however, began during the Reagan Administration a mere 32 years ago. That makes it one of the fastest growing health and wellness companies in recorded history.

One might wonder, then, why Clorox, Energizer, and Arm & Hammer are household names, while Herbalife’s products — with names like Formula 1, Niteworks, and Liftoff — are virtually unknown.

The answer, unfortunately, is that Herbalife is a pyramid scheme. A con and a sham built to shake down suckers who don’t know any better. And it may be the biggest pyramid scheme of its kind in the world.

That’s the conclusion, at least, of Bill Ackman, whose activist hedge fund Pershing Square Capital Management devoted a full year to investigating Herbalife before producing a comprehensive attack website and a three-and-a-half-hour presentation about the nutrition company’s deceptions. That presentation, first given on December 20th of last year, has inspired a torrent of vitriol from Herbalife executives and a slew of major media coverage including an Ackman profile in next month’s Vanity Fair. Why? Because Ackman — a Harvard MBA whose extravagant, aggressive, and often successful investments occasionally put him in the media spotlight for influencing the business decisions of huge companies such as Wendy’s International — makes a compelling case that Herbalife is, at best, a dishonest business, and, at worst, Scamworld through and through.

And because Herbalife has personally affected millions of lives around the world, those people and many others are paying attention.

"The emerging megatrend of wellness"

Apart from its stated status as a major nutritional supplement manufacturer, Herbalife is best known for its business model. It’s a Multi-Level Marketing company, also known as an MLM. That means its products are not sold in stores but rather by individuals who sign up with the company as "distributors" (the proper name given to the men and women who agree to sell Herbalife and recruit others into the company).* Those distributors don’t operate GNC-like stores in shopping malls. Instead, they sell vitamin supplements and diet pills and energy drinks out of their homes, usually to friends, family, and acquaintances. That’s not too unusual. What’s unusual is that it’s virtually impossible to order, say, a bottle of daily vitamins from one of these distributors. What you get when you express interest in an Herbalife product is a sales pitch.

Broken down, the pitch is simple: Why buy a mere bottle of vitamins when you can buy a ton of vitamins, "join the emerging megatrend of wellness," and get rich doing so?

Herbalife's products don't matter at all

The problem, Ackman says, is twofold: first, this upline / downline structure makes it extremely rare for anyone to get rich selling Herbalife products (once you’ve gone through 13 complete levels of downlines, you’ve surpassed the Earth’s population; even Herbalife’s own numbers show that less than one percent of its distributors receive more than $100,000 in total lifetime payments from the company). And second, the Herbalife products don’t matter at all; they’re just part of a well-designed ruse to attract new distributors into the seemingly endless MLM structure.

The former point is interesting — especially in light of recruiting materials that suggest the answer to "deteriorating economic conditions" is to sell nutritional supplements as an Herbalife distributor.

The latter point, however, implies fraud.

According to the Federal Trade Commission, "One sign of a pyramid scheme is if distributors sell more product to other distributors than to the public — or if they make more money from recruiting than they do from selling."

If those numbers were accurate, Herbalife would have no problem identifying itself as a "good MLM." The FTC generally accepts that if more than half of an MLM’s profits come from retail sales, that company is legitimate and legal, just like established companies such as Amway, Avon, Nu Skin, and Mary Kay Cosmetics (though it's worth mentioning that no MLM is beyond reproach; Nu Skin was fined $1.5 million by the FTC for operating a pyramid scheme in 1997 and Mary Kay has also had its share of negative attention recently). 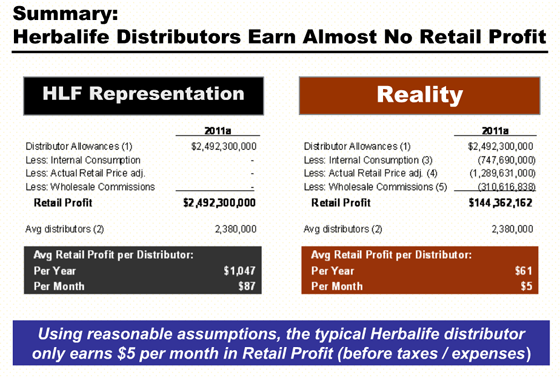 Instead of half of its profits coming from retail sales, in other words, the retail payouts would be closer to just three percent.

If those numbers were accurate, it would be easy to conclude that Herbalife distributors "make more money from recruiting than they do from selling." The FTC would then have no problem identifying Herbalife as a "bad MLM" — an illegal pyramid scheme.

"A distinction without a difference"

If Herbalife wants to stay in business — and if its CEO, Michael O. Johnson, wants to keep his lucrative job — it obviously has a vested interest in proving that it’s not a pyramid scheme. That’s why it’s sticking by its numbers. It has hired a prominent Northwestern University researcher and a Nobel Prize winner to sing its praises. And that’s why Johnson has attempted to paint Ackman as a greedy hedge fund manager set on profiting from Herbalife’s demise with "strange" accusations.

Those accusations aren’t without merit. Ackman is upfront that he’s placed stock market bets on Herbalife’s failure. He says he’ll give whatever personal profits his hedge fund gains from his Herbalife activism to charity. And while Ackman has offered millions in public donations to such charities as the Innocence Project, Human Rights Watch, and the public school system of Newark, N.J., not everyone’s convinced he’s in this game for philanthropic reasons; even the disclaimer on his Herbalife attack website admits Ackman’s company "will profit if the trading price declines for common shares of Herbalife and will lose money if the trading price increases for common shares of Herbalife," meaning he’s set to make a tremendous amount of money if Herbalife fails.

So both Johnson and Ackman have their reasons for arguing whether Herbalife falls on the "good" or "bad" side of the MLM divide. But others say that divide is meaningless.

After getting his master’s degree in business administration from Brigham Young University and beginning a lucrative corporate job with IBM in Milwaukee, Dr. Jon M. Taylor’s wife became critically ill and he was forced to move his family back to his boyhood home near Salt Lake City. Utah is a hotbed of MLM companies and Dr. Taylor wanted to work from home to take care of his two young kids, so in 1994 he joined Nu Skin, a successful MLM company. Though making money was a principal goal, he also vowed to publicly share his experiences and to answer, once and for all, whether any Regular Jane or Joe could get rich working with an MLM company.

After a year of experimentation, he wasn’t able to pay his bills on his Nu Skin earnings. Was he the only person unable to make money through MLM? He applied his MBA research skills and contacted hundreds of tax accountants. He found that none of them had encountered clients who made a living from MLM. He found, in fact, that the spinning "a roulette wheel in Las Vegas is 300 times as profitable" as taking part in an MLM.

He estimates that 99.92 percent of Herbalife participants lose money

Since then, he’s become perhaps the nation’s foremost critic of the MLM business structure. He runs MLM-TheTruth.com, which offers "analysis of over 500 MLM programs, consultation with other top experts, and over 18 years of worldwide feedback." His findings are staggering. His e-book, The Case (For And) Against Multi-Level Marketing, makes Ackman’s claims seem tame and conservative: he estimates that 99.92 percent of Herbalife participants lose money, and that only 0.825 percent of participants make more than $13,028 per year, less than a living wage in virtually every corner of the United States.

"MLMs and pyramid schemes are the same thing," he tells me, "a distinction without a difference. People have a problem saying that, but I don’t. All of these [MLM] companies involve a pay-to-play model where participants are required to pay for their own paycheck."

And that creates an environment that preys on the poor and the uneducated — often in third-world nations — and those who need to work from their homes, he says.

Dr. Taylor’s skepticism is not unique. Herbalife has been banned as an illegal pyramid scheme in Belgium and the U.S. Securities and Exchange Commission has launched an investigation into Herbalife’s business practices. (The New York Post reported earlier this year that Herbalife was also the target of a pending FTC investigation, but that suggestion turned out to be premature.)

Whether the heat from Ackman and various governmental entities mean that Herbalife is doomed remains to be seen. Though its stock price dipped sharply in the wake of Ackman’s presentation, it has rebounded somewhat since then — and its price right now is heavily dependent on the back and forth war between Ackman and his enemies who are applying a short squeeze. Regardless, while the pressure on Herbalife (and other MLMs) has increased recently, Dr. Taylor — who’s been actively researching MLMs for two decades — has more moderate immediate goals about where things should go.

"Hopefully this will get people to think more critically about these businesses before they get involved," Dr. Taylor said. "Because, to me, they’re pyramid schemes, plain and simple. I hope people understand that."

---------
* A previous version of this story referred to Herbalife "distributors" as "franchisors," which is imprecise. Dr. Taylor explains: "Using 'franchisor' and 'franchise' suggests a completely different model, one with territorial protections, etc. — which are notably absent from MLMs — which are predicated on unlimited recruitment of endless chains of participants. This is their most distinguishing characteristic — and their most fundamental flaw. MLMs assume infinite markets which don’t exist in the real world." We regret the lack of clarity.