Despite Kim Dotcom's protestations, there's no doubt that a lot of people used Megaupload to download pirated content. Now, a new study from Carnegie Mellon's Initiative for Digital Entertainment Analytics suggests that the shutdown could have increased sales and rentals of legal movie downloads. After studying two studios across 12 countries over 18 weeks, authors Brett Danaher and Michael D. Smith estimated that digital revenues were between 6 percent and 10 percent higher than they would have been were Megaupload still a going concern.

At first glance this would seem difficult to prove, with the consistent growth experienced by the digital market and the inherent peaks and troughs of release schedules. However, the study compensated for this by weighting the rate of Megaupload usage on a per-country basis; the logic is that countries with more Megaupload users before the site's takedown should see a greater increase in sales and rentals. Sure enough, that's what the study found — countries where Megaupload was most popular, such as Spain, France, and Belgium, experienced a greater change in sales once the site was no longer accessible. 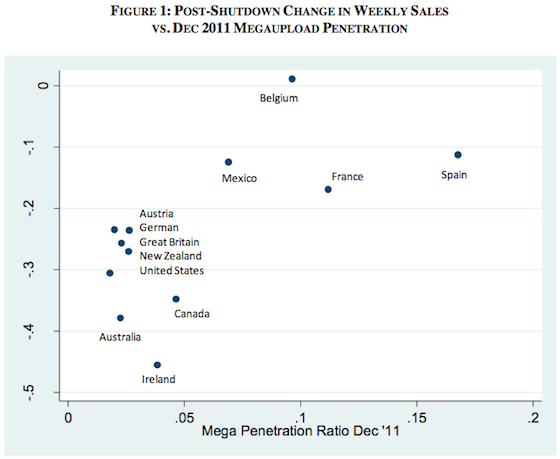 The results also suggest that widely available, legal alternatives to piracy are part of the solution; while there are countless alternatives to Megaupload, it seems the popular site's end was enough to drive a significant number of people to legitimate, convenient means. This dovetails with an argument that study co-author Smith has made before — he previously wrote that "Hollywood is leaving money on the table" by delaying movies and imposing release windows around the world. Smith believes that making legal content more valuable than pirated content to the consumer is the answer to studios' woes, and if his latest study is anything to go by, both improving the accessibility of digital sales and stifling the convenience of piracy can go some way to achieving this goal.

More from this stream Megaupload's legal battle with labels and the DOJ: the full story