The anti-Creationism: will schools in the US embrace new pro-science curriculum?

A new plan to include climate change and evolution in science class is due this month, but it's up to states to adopt

Share All sharing options for: The anti-Creationism: will schools in the US embrace new pro-science curriculum?

Baking soda volcanoes just aren't cutting it anymore. American public school students in science classes of the near-future should be taught that human activity is leading to global warming by the end of eighth grade, that DNA supports the theory of evolution by the end of high school, and that human beings can engineer cleaner energy sources and more abundant food and water supplies, according to a new national education plan for kindergarten through high school, due to be released by the end of March.

Not all states will adopt the plan

The plan, called Next Generation Science Standards (NGSS), is being finalized right now by a crack team of 41 experts from around the country, made up of science teachers, school officials and even a researcher at the DuPont chemical company. It's completely voluntary and up to each state's of board of education to adopt the final plan, and 26 states have been helping craft it over the past two years.

But not all of them may end up adopting NGSS, and many outside of the group helping to write it almost certainly won't. Already, the Texas Education Agency has declared it won't be using NGSS to guide what is taught in its public schools, whatever the final version contains. But the reasons Texas is abstaining, and why many other states may join it in holding out, are far more complicated than just the fact that the final plan is set to include hot-button, politically charged issues like climate change, evolution and geoengineering. After all, many schools across the country already teach these topics. The NGSS is just the first time they are being suggested, and seriously considered, on the national scale.

"They're suspicious of any national educational effort, and education is a states' rights issue."

"No matter what NGSS contained, Texas wouldn't adopt them," said Helen Quinn, chairman of a committee at the National Academy of Sciences that drafted the initial document guiding the team that's writing the new standards, in a phone interview with The Verge. "They're suspicious of any national educational effort, and education is a states' rights issue."

It's important here to point out that Texas isn't disagreeing because the new standards come from the federal government or the White House. "There was no conversation with the federal Department of Education in developing the framework," Quinn said. In fact, the process to create the new standards has come entirely from a collection of nonprofit groups, one massive private corporation, and a little over half of the states in the US.

"There was no conversation with the federal Department of Education in developing the framework."

Quinn's organization, the National Academy of Sciences, got the ball rolling on the new standards back in the summer of 2011. The nonprofit association of scientists oversees a division called the National Research Council, which received funding from the Carnegie Corporation of New York to work on creating a broad template for what the country's science classes should be teaching, including the content of lessons and the methods of teaching students, to ensure America's kids learn enough to keep pace with the globalized, increasingly technologically intertwined world.

"We basically brought out one big narrative, the 30,000-foot perspective," said Martin Storksdieck, director of the board on national science education at the US National Academies, the umbrella organization that includes Quinn's group.

The resulting document, "A Framework for K-12 Science Education," was first published almost two years ago. From there, the framework was passed to another nonprofit educational group called Achieve, which called upon 41 experts from 26 states to figure out the nitty gritty of how exactly how science teachers in public can adopt the new approach in their classrooms in the most expeditious but least disruptive fashion possible.

That will be easier said than done. Many science classes in the nation's nearly 100,000 public K-12 schools have up until now focused their classes around just three broad fields: biology, physics and chemistry. In each of these, students are often taught lists of facts and major theories, and not necessarily the scientific principles behind them. So the Achieve team has spent the past two years working on the final NGSS document, including trying to integrate public comment and criticism. In the end, their final plan will stick to the broad outlines made by the framework, which includes engineering, technology, and earth and space sciences. 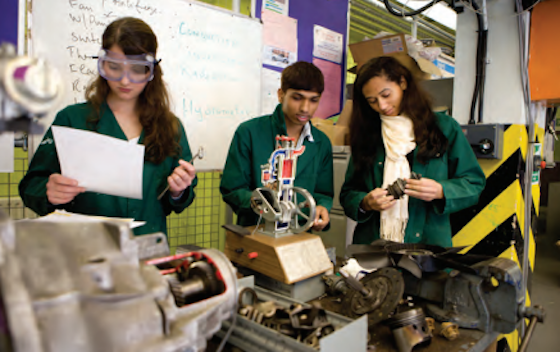 "Within NGSS, climate change is actually a tiny part of the overall new picture of Earth as a system," said Ramon Lopez, a physics professor at the University of Texas in Arlington, who's one of the 41-member writing team currently scrambling to finish the standards by the self-imposed, end-of-March deadline. "That's actually the bigger change. For example, in high school, students are expected to learn there's variation on the Sun and that impacts us here on Earth."

Lopez and Kevin Fisher of the Lewisville Independent School District, another Texas-residing member of the 41-member NGSS writing squad, both said they weren't too concerned that their populous state and its 4.8 million public school students won't actually be covered by their plan.

"I do not see this as causing any type of divide."

"Even if a state does not adopt the NGSS, the NGSS and the framework document will still provide valuable resources to that state," Fisher wrote to The Verge in an email. "It will help states to focus on the 'big ideas' in science, be able to effectively integrate the science and engineering practices, and connect the various science disciplines through the cross-cutting concepts. I do not see this as causing any type of divide."

Not everyone who was involved in the development process behind NGSS is as sanguine about the prospect that some states are sure to opt-out entirely. "If a state in its ultimate wisdom decides to disadvantage its children and advantage other children elsewhere, that's democracy," said Storksdieck.

Indeed, even in the states that do end up adopting the new standards, in the end, it's up to local school districts and local teachers to implement them on a practical, day-to-day level. That process alone could take three to four years just to get started, and realistically, twelve years to get NGSS working in all grades kindergarten through high school. And as Storksdieck and everyone else who The Verge spoke with about the issue acknowledges, the unique culture of a local community and its parents will go a long way toward determining just how and what public school students learn. So even the backers of NGSS are keeping their expectations in check.

"The hope is that this provides students and learners tools they can use in their lives," Quinn said. "At the least, they'll be able to ask themselves 'is this information coming from a scientific perspective or another perspective that's not scientific?' Not that another perspective isn't important. There are certain things science tells us nothing about, what makes a good poem, for example."

Looking further into the future, when the first students who have gone through NGSS-inspired science classes are all grown up, the backers of the plan think that the reality of science will hit them in the face irrespective of whatever other beliefs they hold to be true. "In the long run, we fell the evidence of climate change will be so strong, even those who have a personal interest in avoiding or minimizing it won't be able to," Storksdieck said.