National Geographic this week unveiled a new Tumblr site devoted to showcasing some of the more obscure photos in its vast archive. The Tumblr, titled Found, was launched in celebration of the magazine's 125th anniversary, and although their initiative still young, National Geographic's archivists have already published some remarkably beautiful images.

Not surprisingly, the photos published on Found cover a wide breadth of cultures and eras. Some, like the below image of Budapest's Gellert Bath House, give quotidien, slice-of-life snapshots from bygone times, while others stand out on purely aesthetic or compositional grounds. On the more bizarre end of the spectrum is a 1903 photograph of Alexander Graham Bell kissing his wife Mabel within a "tetrahedral kite" (embedded above). 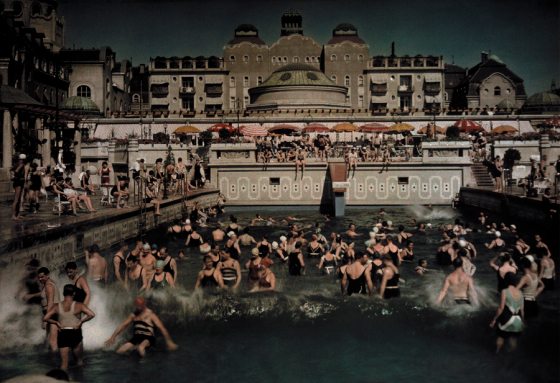 The initiative is led by William Bonner, who curates National Geographic's extensive photo archive in Washington, DC. Although Bonner has spent years rummaging around the magazine's basement, he says he constantly finds new and fascinating images — many of which have been lost to history.

"Many of these photos have never been published and are rarely seen by the public," the publication explains on its Tumblr. "We hope to bring new life to these images by sharing them with audiences far and wide. Their beauty has been lost to the outside world for years and many of the images are missing their original date or location."

At the time of this writing, National Geographic has posted just nine photos since the site went live earlier this week, though the magazine says it plans to add more "voices, stories, and artifacts" in the future.