For NYC, the only thing messy about yesterday's 'blizzard' was the travel schedule

As yet another winter storm rambled across the upper half of the United States this week, a time-honored tradition set in: hundreds of flight cancellations struck travelers in a coordinated wave just ahead of the storm’s leading edge. At the very least, it’s an inconvenience for the tens of thousands of people trying to get where they’re going; at worst, a severe weather disruption can have an economic impact of hundreds of millions of dollars.

But for many travelers — including a group of Verge employees trying to get to SXSW — there was no nail-biting in the hours leading up to the storm. That’s because their flights had been canceled on Wednesday, long before the winter blast had even arrived. On Thursday, the storm had been widely expected to dump multiple inches of snow, sleet, and rain along the eastern seaboard. But Thursday turned out to be a non-event in New York City: apart from an occasional drizzle, it was a dry, calm, not-too-cold day. An aircraft-friendly day. 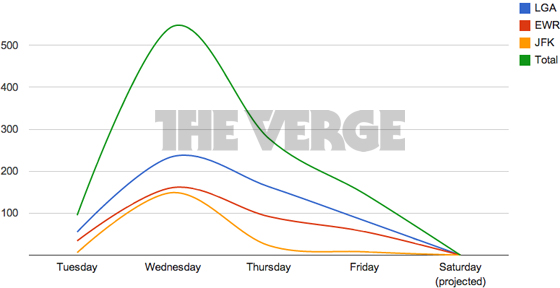 By then, FlightAware shows that some 287 flights had been canceled at LaGuardia, Newark, and JFK alone. So why did the planes stay on the ground?

Canceling flights in advance is a hedge

"When a flight's canceled, it's absolute," Southwest Airlines spokesman Brad Hawkins tells The Verge. "We don't reinstate canceled flights." It might seem like an airline is leaving money on the table by not putting aircraft in the skies when the weather is good enough to do so, but it’s more complicated than that: when flights are canceled in advance, equipment and flight crews are kept away from the affected destinations so they’re not stranded. By the time anyone realizes that the weather actually isn’t too bad, the planes and people aren’t around to handle the flights anyway. "The trick is to keep planes from getting stuck in snow, or hail, or a hurricane, and keep our employees and customers safe by not trying to get to airports when ground conditions could be challenging," Hawkins says.

Canceling flights ahead of a possible storm amounts to a hedge: proactive cancellation can cost airlines a lot of revenue, but they could lose even more if they were to ground aircraft closer to flights’ departure times. United, for instance, says that it lost some $90 million in revenue in the wake of Hurricane Sandy last year, but only $35 million in profit.

Ironically, snow is falling at a steady pace here in Midtown Manhattan today, but flight cancellations at the city's three major airports are way down. That's because the weather wasn't widely expected to be bad enough today to keep aircraft on the ground — severe winds or the possibility of hail, for instance — and both equipment and crews had had time since yesterday's cancellations to relocate and get back on track.

"The trick is to keep planes from getting stuck in snow, or hail, or a hurricane..."

Behind this orchestra lies a team of meteorologists, a critical group of soothsayers inside any major airline. Hawkins says that Southwest’s forecasters work with the flight operations group to make calls in six-hour increments throughout the day. And airlines don’t always see eye-to-eye — though flight cancellations are coordinated with the FAA, they’re not mandated.

Indeed, some Verge staffers ended up making it to Austin yesterday, depending on which airline they’d flown. Just in time to trade in some root vegetables.