Swords and cyberpunk: ‘Transistor’ is a darker, grittier take on ‘Bastion’

Share All sharing options for: Swords and cyberpunk: ‘Transistor’ is a darker, grittier take on ‘Bastion’

Transistor doesn't stray too far from the roots laid down by Supergiant Games' excellent debut title Bastion. It's an action role playing game full of vivid colors, a gravelly-voiced narrator, and very satisfying combat. All of these things were apparent during the all-too-brief demo I played at the Game Developers Conference in San Francisco last week. But there are differences, and in some ways they make the game slicker and more appealing. There's the cyberpunk-esque setting, for one, which replaces the fantasy-meets-Western world of Bastion. Perhaps more important are the changes to the combat, which let you attack enemies in both real time and turn-based battles — or a combination of the two. It's flexible and strategic, and even in its early pre-alpha state, it's a game that I wanted to keep playing long after the demo was over.

"You get the ultimate weapon at the start."

At the beginning of the portion I played, your character — a famous singer named Red — has just been attacked. But as a result she gets access to a strange weapon, the titular transistor, which looks a whole lot like a giant sword. Unlike many RPGs, Transistor is more about constantly upgrading one weapon as opposed to constantly acquiring new ones. "You get the ultimate weapon at the start," says Supergiant's Greg Kasavin. Over the course of the 20-or-so minutes I played, Red gained four different abilities, each of which proved useful.

While Bastion had a more immediate feel to its combat, Transistor is much more deliberate and strategic. You can still attack enemies in real time, but there's also a turn-based element, where the action freezes and you can take your time deciding how to proceed. "I like to joke that it's a turn-based game where you're the only one who gets to take a turn," says Kasavin. However, you only have so many actions you can take before it switches back to real-time — it feels sort of like a tighter version of the VATS system from the Fallout series, and it makes the combat feel more tactical. But because it's optional, fans of Bastion-style combat can still play how they like. "We wanted to continue exploring the action RPG genre," says Kasavin. The new combat was designed to add "more drama to the battles."

"It's a turn-based game where you're the only one who gets to take a turn."

It feels great, but the most striking thing about Transistor might just be how amazing it looks. The art style is reminiscent of Bastion in a lot of ways, but the sci-fi setting makes it darker and grittier. Even in its early state the characters moved fluidly, and there are even brief side-scrolling sequences that provide a nice contrast — and it just looks cool seeing a character with a giant sword riding a motorcycle through a futuristic cityscape. Of course, it wouldn't be a Supergiant game without great sound, and Transistor once again features excellent — though less enveloping — narration and some memorable music. All of the elements of the game seem to fit together really well. 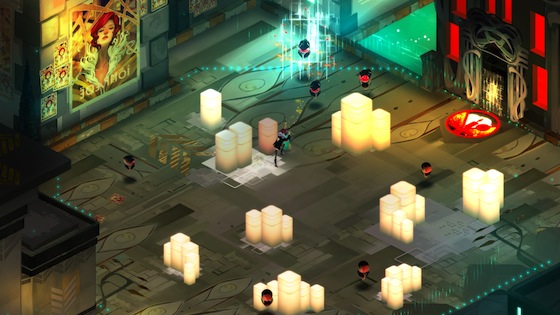 Unfortunately, it'll be quite some before we'll get to play the final product — Transistor isn't due to be released until 2014. The studio also hasn't announced what platforms we can expect it on. After debuting on Xbox Live Arcade, Bastion eventually made its way to a number of other platforms, including both Steam and iOS. If things go well, Transistor could have a similar fate. "The game did unexpectedly well," Kasavin says of Bastion. "It didn't lose momentum as time went on; it would be awesome if that happened here."

The best of GDC 2013: a preview of gaming's future