Google is respected for its prowess in the cloud. Android phones that connect up to Google's services enjoy a wide array of features — from email to apps to notes — that offer seamless sync between the web and your device. Yet there's one enormously important feature that Google does not extend to consumers: the ability to find or remotely wipe an Android phone if it's lost. Instead, the company has kept its solution limited to enterprise and paid Google Apps customers. The rest of us are forced to discover and rely on third-party solutions. For a company that is otherwise so strong at cloud services, why hasn't it found a way to offer this essential feature to everyone?

Android users do have options for remotely wiping their phone. If you're using Google Apps or are attached to an Exchange server that supports it, you (or your administrator) can go to your a device management page to find, lock, wipe, or ring / message your phone. It's a set of four core "lost phone" features that ought to be standard and available to every user on any modern smartphone.

Lost phone features that ought to be standard

Consumers who don't use Google's enterprise apps or Microsoft Exchange also have options, but they have to go out looking for them in the Play store themselves. Probably the most popular option right now is Lookout Security, a full-featured security app that offers both missing phone functionality and a slew of anti-malware features — although it requires a paid subscription for the most important capabilities. Lookout boasts upwards of 35 million users, which is significant not just for the company's bottom line but also as an indicator of just how many Android users crave these services.

To get to that number, Lookout gets customers both organically and through carrier and OEM partnerships, including deals with T-Mobile, Deutsche Telekom, Sprint, and others. Abheek Gupta, Lead Android Product Manager at Lookout, claims that when a user loses his or her Android phone, on average only 30 percent get it back — but a product like Lookout boosts that number to 70 percent. The company helped recover nine million phones in 2011, and since that time it's doubled its employee count to nearly 200 people. Clearly, there is a market for these kinds of services on Android.

The market isn't limited to (relatively) large companies like Lookout, either. The Google Play store is littered with lost phone apps and services, ranging from from tiny and untrustworthy to bloated and well-known. One relatively popular option is Cerberus anti theft. Like Lookout, it also has some advanced features like taking a photo when the wrong PIN code is entered and can even let you perform actions via SMS if you're stuck without a computer and need to wipe your device. Luca Sagaria, the founder of Cerberus maker LSDroid, says he has sold around 150,000 licenses to-date, enough to make the app a viable business (and a fan favorite amongst the nerdier set of Android users).

Cerberus, Lookout, and our own common sense show us that there is a real need for lost phone features on Android. If the market is there, it seems like Google ought to want to fill it.

Why isn't it built into Android?

Which leads once again to the question — why isn't it built in to Android? The first and most obvious answer is that "Android" is a broad and open ecosystem and that, at its core, technically it doesn't have any Google services built-in. The Android most of us use, however, has Google's services added on top, and there are precious few reasons for not offering missing phone functions alongside the Google Play Store, Gmail, and the rest.

Perhaps it's that there's something uniquely difficult about offering lost phone features on Android — but that argument doesn't hold water. Google already does a remarkably good job tracking a phone's location using Latitude (just check your device's location history, if you have that feature turned on). In fact, Sagaria says that he coded up the first version of Cerberus in just three or so months back in 2011 and currently supports it with only two engineers and one customer service representative. And we can’t lose sight of the fact that Google does offer some of these capabilities as a paid service to its enterprise customers. But saying that Google is looking to make a buck on lost phone features doesn't really make sense — they are a small part of the Google Apps offering.

What, then, is Google's hold up? The reason we've heard most often is that classic Android bugbear: fragmentation. Until recently, creating software that digs deep into the bones of an OS (as remote wipe needs to) required significant effort across multiple devices. "With Froyo and Gingerbread you really had to customize based on OEM, based on the carrier's skin on top of it," Gupta says. 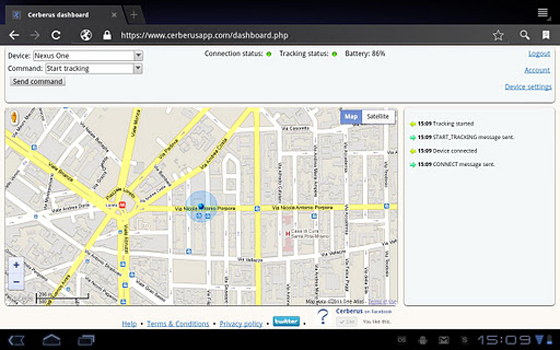 With ICS and Jelly Bean, though, "we see that there's stuff that we can do that holds fairly largely across OEMs and their skins," Gupta adds. Sagaria notes that fragmentation mainly becomes an issue with advanced features like taking a photo, but in large part it's not a major issue. Indeed, Google may feel that it needs to leave some services and features on the table for its partners to provide — it will happily point out that the open nature of Android allows for many third party solutions. Indeed, OEMs and carriers offer solutions to users — often for an added fee — and would likely be none-too-happy to see yet another revenue stream obviated by a built-in Google offering (with Play, for instance, carrier music and app stores have largely become a thing of the past).

But most importantly, lost phone feature have become "table stakes" in the smartphone ecosystem: Apple offers them, BlackBerry offers them, Microsoft offers them, and heck, even the lowly and wildly underfunded Palm offered remote wipe functionality in 2009. Regardless of Google's reasoning, leaving essential lost phone features to third parties isn't a tenable long-term solution. Consumers are made to find their own solution and do their own research about which product to choose, to pay for, and most of all, to trust. The lack of a built-in offering that surfaces itself on phone setup means that many users will simply forget to do so, as evidenced by the large number of questions in Google's own forums.

The solution is as obvious as it is simple

The solution is as obvious as it is simple: Google already "blesses" Android phones with its official apps and services, and remote wipe should simply be part of that package going forward. "It should start with Google on any Android phone with Google Play services," says Phil Nickinson of Android Central. "It should be as easy to remove your life from your phone as it is to sync it there in the first place. It's that simple, and it's that important."

Google I/O is a little more than a month away. The perfect time to introduce lost phone features for regular consumers is long past, but Google's biggest developer conference is at the very least an opportunity to make up for lost time. And, maybe, to make up for all the lost phones that regular Android users never had a chance to track down.

Stolen phones: how police and the wireless industry are protecting a popular target