The director discusses the legacy of 'Primer,' broken hearts, and his new project

As the story goes, Shane Carruth took $7,000 and made one of the trippiest time travel movies of all time — one that eschews flashy special effects for a complicated (yet surprisingly cohesive) nonlinear narrative. Primer was a critical darling, but after its release, Carruth went silent for almost a decade.

Upstream Color is the long-awaited follow-up to his 2004 debut. It premiered this year at Sundance (you can check out our review for more details) and is now seeing a limited theatrical release (think: less than 100 theaters) and will be available for streaming and download May 17th. We sat down with Carruth to talk about Upstream, his upcoming projects, his thoughts on Primer’s legacy, and what happened to the now-abandoned A Topiary.

Without delving into spoilers, it’s interesting to me how much of Upstream Color is devoid of dialog. I think Steven Soderbergh noted that silence is something that movies can get away with but TV can’t. For you, what else can movies do — this long form, lean back experience — that short-form videos like TV just can’t?

I don’t know that a movie can do something that a TV show couldn’t do. Might be unwilling to do though.

"It’s something that you put on and internalize the way you would an album."

I think I would like to see narrative get there, to the point where, like an album, you put it on, you don’t know everything about it, but you listen to it a few times and suddenly recognize all of this nuance and it becomes one of your favorites. That could be something new, and it’d be good to aspire to that.

Do you think a movie like Upstream Color could work in a traditional theater model? Could it do a standard release and see success nationwide?

Like put it on 1,000 screens or something? It’s tough. A movie like it could. Eventually, I think. I really don’t know.

New digital distribution is coming up in a big way. Do you think that that’s going to replace the traditional model, or is that a symbiotic, complementary service or distribution model?

It’s definitely complementary. I don’t know if theatres are going anywhere. It’s possible that we’ll have a world where the same people that are strict about only listening to music on vinyl, or enjoy that, will be the same sort of people that go to theatres to see movies. I can see that, but I don’t know. There’s more than enough reason to stay home now, and people still seem to be going out. 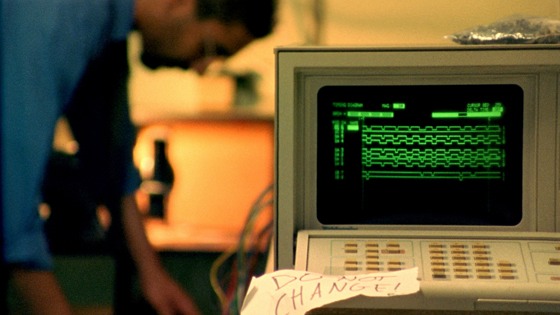 I really want to pick your brain about Primer. There may be seven or eight timelines that overlap each other, but they do follow a pattern. I’ve seen dozens of different people try to map out Primer. Did you have something going in where you diagrammed it out?

Have you ever shown that to anybody?

I bet it doesn’t exist anymore. I bet it’s thrown away.

I don’t even want to know what’s outside the edit anymore. I don’t want to accumulate that footage, because this is it now. This is the thing. No matter what experience we had making it or how we got to those answers, these are the answers. This is the thing.

What do you think about people who constantly debate and interpret and try to graph that out? Have you seen any of that online?

Gotcha. No. I looked at it initially. I don’t know what to do with it, to be honest. I’m so grateful that anybody cares enough to go and do that.

Who does time travel right? What films have you seen that really kind of nailed it? Looper doesn’t count, because you helped with that.

Right. I didn’t really help with that.

What did you help Rian Johnson with? You have a special thanks for that.

I did. Well, he was nice enough to act like I was — he said something, I think on Twitter, where it had been vetted by me, or whatever. I don’t know what he said. He was being very nice. He showed me the script, and I got to read it. We had some really great conversations about it. He’s smarter than I am, so it’s not like he needs my help or whatever. There was a period of time where we were talking about doing effects. But it was mainly just conversations and stuff.

When I first heard about Primer, it was extremely hard to find. Amazon seemed to always be sold out. Netflix had maybe one disc in the entire company. Obviously that’s not the case anymore. You’ve taken more control, there’s video on demand. What prompted you to shift your digital strategy?

"What’s a Netflix life sentence, what’s that worth?"

Honestly, I really started thinking about it when Upstream was shot. What I really wanted was a metric: how do these things work? What’s the revenue from iTunes if you just put a title out there? What’s a Netflix life sentence, what’s that worth? All of these things. I wanted a test case. That was the motivation to get started on that.

How’s it been so far for Primer?

It’s good. It’s actually really amazing, to be honest. I’m so grateful that it seems to be holding it’s own. It’s old. There’s no promotion going on right now, other than now that we’re talking about it. I’m so grateful that people received it well, that Sundance, that program did, that it got distribution. I’m still grateful to this day that that happened.

Where would you have been if not Primer, If that had not taken off?

When we spoke earlier, you mentioned that Upstream was financed more from friends and yourself. Why did you go that route instead of trying to find traditional backers?

Because I wasted years trying to get a project called A Topiary made. I invested a lot of myself in it. I think it’s a really great film.

Primer was nine years ago, so this would have been about three years. I spent about two years writing and perfecting an effects workflow for it because it has a lot of effects in it, and I need the aesthetic to be something that I can count on and done a little bit cheaper than farming it out to third party effects houses. I spent a lot of time on that and found lots of enthusiasm with film financiers.

"I invested a lot of myself into it, and it sort of broke my heart."

Is A Topiary still a work in progress?

No. I’m not pursuing that anymore.

I invested a lot of myself into it, and it sort of broke my heart, to be honest. I can’t really let myself go down that path anymore, or I’ll get angry about it, basically.

So you’re not going to return to that movie 10 years later?

Maybe I’ll be in a different state by that time. The thing is, it’s taken me awhile to figure out that there’s no common ground between me and the way traditional financing works. I don’t think that there ever will be any common ground, so it’s hard for me to do that. I would have to come up with some unique way to do it. Right now, I’m too passionate about what I’m writing and what’s currently in front of me to take my eyes off that.

Did you consider crowdfunding? Kickstarter? Going after the fans?

I considered it, but I didn’t do it. I might next time. At the time, when I was looking at it, I had a false opinion of crowdfunding, that it branded the project too much. That from that point forward it wasn’t a film, it was a Kickstarter film.

I think we’re past that now. I think it’s a completely legitimate thing, although I do think that you have to have a conscience if you’re going to do that. If you’ve got money available to you as equity, you can’t just take people’s money for free. I think that should be an option — it should be like asking for somebody if you can sleep on their couch. It happens, and it’s necessary, but if you’ve got a place that you can afford, then you shouldn’t be doing that.

Can you talk about what’s currently in front of you?

Sure. I’m writing a story called The Modern Ocean. It’s a continuation of the emotional language that was built up for Upstream. It’s a tragic romance at sea in the world of commodities trading. It’s ships at war.

Will you cast yourself again?

Interview has been condensed and edited

Footnote: "What I'm seeing is people not even taking advantage of what you can do in a movie. Here's a good example: A movie is something in which people don't talk for long periods of time. That's something that TV doesn't do, and it's something that movies should do and often don't. What I find in movies now is you're told everything instead of being shown something." — Steven Soderbergh (return to question)