In an effort to bring more searchable and useful data to your profile, Facebook has announced an upgrade to its status update feature that will prompt users with specific tags for movies, music, and feelings. "Starting this week, people can express what they're watching, reading, listening to, eating, drinking, or how they're feeling in status updates," Facebook wrote in a blog post announcing the changes. Facebook users can now click the smiley face icon in the News Feed share menu to give an update on feelings or actions, and choose between a number of preset categories (shown below). When selecting from the new categories and options, some of the status updates will be accompanied by emoticons. 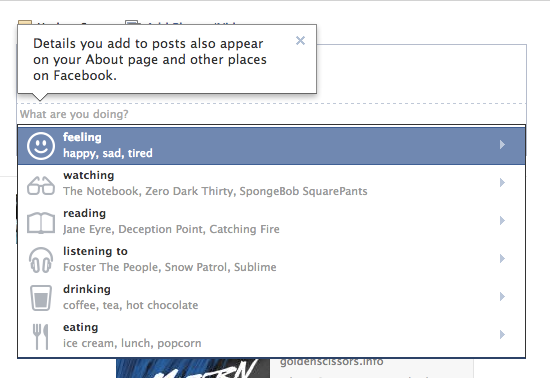 While users have always been able to share what they're doing on Facebook, the update encourages users to tag specific items or pages — something that will help the company flesh out its Graph Search service with more data on its users. The changes follow several recent upgrades to Facebook's layout, including a Timeline redesign from March that added detailed sections for music, movies, TV shows, and books in a user's "About" page. The March upgrade folded in newly legal support for Netflix integration, as well as other apps like Goodreads and Flixster. Facbeook also recently redesigned its News Feed to separate streams of content into multiple categories.