Panasonic has developed its 'last plasma panel,' but television sales to continue

Panasonic has developed its 'last plasma panel,' but television sales to continue

Panasonic's latest television, the ZT60, is the best plasma the company has ever made. It will also be the last plasma panel to come out of the company's research and development department, which means Panasonic will never make a higher-quality plasma television.

Rumors that Panasonic would end plasma research and development first surfaced in December, and a report from Nikkei last month said the company had closed down R&D with plans to pull out of plasma altogether as early as 2014. Panasonic Display Vice President Kiyoshi Okamoto confirmed to The Verge today at an event in New York that development has ceased, and said that the ZT60 uses "the last plasma panel" from research and development. Okamoto was quick to note, however, that panel development is not the same as television production: he made it clear that Panasonic would continue to make and sell plasma televisions into 2014 at the very least, saying that "we have a responsibility" to customers to continue production.

"OLED is one of the key future products"

When asked if plasma R&D may ever start back up, Okamoto said that isn't the plan. The company has shifted at least some of its plasma engineers to OLED development, with which Panasonic plans to eventually replace its plasma lineup. Panasonic has yet to reveal its OLED plans, though it showed off a prototype model at CES this January and it is in a co-development partnership with Sony. Okamoto said "OLED is one of the key future products" for Panasonic, and that it is continuing to study demand for the televisions before announcing any plans. He elaborated that the company may focus on business sales at first. Considering the company's financial woes (it posted a nearly ¥700 billion loss the quarter before last) the executive said it needed to make sure it could profitably produce OLEDs before bringing them to market. Manufacturers across the board have struggled with yield rates to-date, making OLEDs prohibitively expensive and rare.

The move to shutter plasma development comes as LCD continues its dominance. Some consumers continue to fear burn-in and others believe LCD is a newer — and therefore better — technology. Plasma shipments plummeted 23 percent year-over-year in 2012 compared to just a one percent drop for LCDs, according to NPD. Panasonic has been hurt by the move to LCD, and it projects that plasmas will continue to represent about 11 percent of its unit sales in the future. Nevertheless, plasma remains an important part of Panasonic's television lineup. Of the company's 2013 models, about half are plasmas, and representatives said that the company would continue to advertise that "plasma has superior picture quality" over LCD televisions. However, Okamoto said that the company has invested too heavily on plasmas, and that "we should invest more in LCD," especially when it comes to marketing. 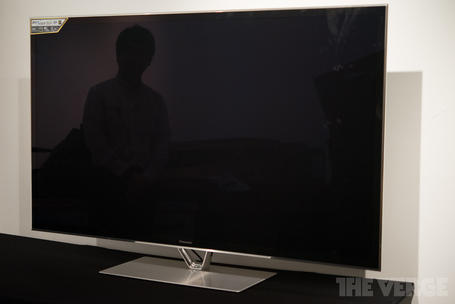 If Panasonic must pull the plug on plasma development, the ZT60 isn't the worst place to stop. The television, which will be available in 60- and 65-inch models this June for about $500 more than the $2,999.99 VT60, looked fantastic in a demonstration today in New York. The television was pitted head-to-head with a Pioneer Kuro Elite 151FD, part of the company's highly-vaunted plasma lineup that was discontinued in 2009. The ZT60 compared favorably with that set, and executives said the new model indirectly takes advantage of some of the developments Panasonic acquired from Pioneer back in 2009. Black levels were not quite as good as the inky levels we've seen on OLEDs, but they weren't far off. The company says a carefully laminated filter, which eliminates the air gap in front of the panel, reduces reflections and maintains true blacks. The television also clearly beat the Kuro when it came to motion blur.

With Panasonic and the industry as a whole moving away from plasmas, the so-called "Beyond the Reference" ZT60 may very well be the pinnacle of the display technology. If you've been holding out, there is little reason to wait any longer — though it appears that televisions using this same panel and other plasma displays from the company will be available for some time to come.