Mail Pilot for iOS: is there room in the App Store for a $14.99 email client?

Share All sharing options for: Mail Pilot for iOS: is there room in the App Store for a $14.99 email client?

Over a year after successfully reaching its Kickstarter goal, Mail Pilot is finally out of beta and in the iOS App Store. Although it was originally intended as a subscription-based service, Mail Pilot’s developers have changed paths and decided to launch the app for $14.99 with no subscription. When it was first announced, Mail Pilot was hailed as an "ingenious" and "revolutionary" idea; a complete rethink of how we manage email that turns your inbox into a to-do list. Since its Kickstarter campaign, however, we’ve seen a slew of email apps on the iPhone, and one in particular, Mailbox, has seen wide praise for "fixing" email on iOS.

The similarities between Mail Pilot and Mailbox are impossible to ignore. Both allow you to organize your inbox not by folder or label, but by the date you want to deal with your email. After adding your email accounts — any IMAP account can be added — your unified inbox will be populated, and Mail Pilot will invite you to "swipe your way to inbox zero." Swiping an email to the right allows you to quickly set aside an email for dealing with on an undetermined date, or set it for review tomorrow, in five days, or one week. Tapping the checkbox by an email marks it as completed, while an arrow by each message expands to give you options for archiving, deleting, adding to a list, or dealing with on a particular date. You can also swipe an email to the left to select it and others for group deletion or completion.

Mail Pilot and Mailbox are similar, but differ in execution

So what’s the difference between Mail Pilot and Mailbox? Execution. While Mailbox routes your email through its servers, Mail Pilot acts entirely within the boundaries of your email provider. It creates a number of folders (or labels, if you’re a Gmail user) in your inbox and archives your set aside, completed, and dated emails into each. While this system has its benefits over Mailbox’s third-party server technique — your Gmail will be as reliable as it is using Google’s official app — it also severely limits the app’s ability to serve as your go-to email client.

The biggest issue you’ll face in switching to Mail Pilot is the lack of push support — that means you won’t be notified when a new email rolls in if you don’t have the app open. Mail Pilot will automatically fetch email every five minutes when the app is open, but beyond that, you’re stuck with pull-to-refresh to get your emails into the app. Unrelated to push, but made worse because of it, Mail Pilot is also missing local notifications. The app does make it clear when an email you’ve previously marked for reading later is ready to be dealt with, but there’s no way to know that until you open the app. The developers say that local notifications are coming soon, and defend the lack of push by saying "users’ email account information, passwords, and message data do not belong on any third-party servers." For casual users that probably won’t be a problem, but it’s unlikely that many casual users will want to pay $14.99 for an email management app.

No push notifications will be a big issue for many

Aside from the push issues, Mail Pilot’s core email experience — that’s writing, sending, receiving, and reading emails — is pleasant enough. Sending email from any number of added accounts is just as simple as with Apple’s default mail app, and quickly replying to emails works better than perhaps any other iOS email client. Replying to an email feels more like texting than emailing: there’s a slim email input field and you can seamlessly scroll through the email thread you’re replying to while writing. The unified inbox works perfectly, and all of your conversations will be neatly threaded. I’m not totally sold on the overall aesthetic of the app, but that’s a matter of personal preference; the design choices are solid and the typography and iconography used are legible and easy to distinguish from one another. 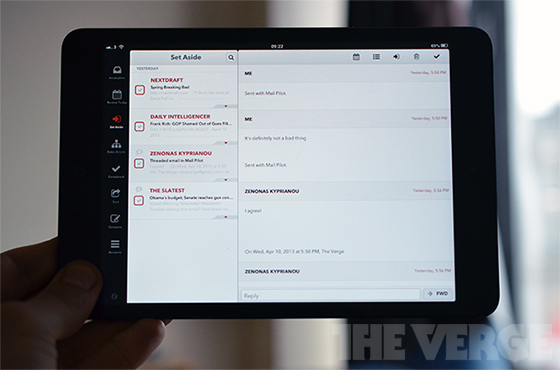 Unlike Mailbox, Mail Pilot is a universal app, but using it on an iPad is a mixed bag. In landscape mode it’s a delight; it’s split into three columns, giving you quick access to more functions than the iPhone version and making managing emails quickly far easier. In portrait mode, however, things don’t quite work. There’s no persistent menu, so switching between emails and functions involves multiple swipes and taps. It’s not the biggest issue in the world, but if you’re one of the many people who prefers using their iPad in portrait, you won’t have the best experience.

Mail Pilot’s premise is fantastic. We know it’s fantastic because, for the most part, Mailbox nailed that premise just three months ago. It could yet prove a success, if its developers can fix its inadequacies and create a truly top-tier service — there are plenty of users willing to pay for quality. If Mail Pilot was released six months ago, when it was clear that Sparrow’s issues would never be resolved, Gmail for iOS was an ugly web app, and Mailbox was unheard of, it wouldn’t be difficult to recommend it as a great — if flawed — experience for hardcore email users. For now, though,it just doesn’t do things significantly better than its competitors — or significantly different enough — to justify its $14.99 price tag.