Samsung announces Galaxy Mega 5.8 and 6.3, coming to Europe in May

Samsung announces Galaxy Mega 5.8 and 6.3, coming to Europe in May

After months of speculation, Samsung has finally revealed its latest oversized smartphones, the Galaxy Mega 5.8 and 6.3. Larger than even Samsung's enormous 5.5-inch Galaxy Note 2, both phones are low- to mid-range in terms of specifications. The larger Galaxy Mega has a 6.3-inch 720p display, LTE connectivity, 8GB or 16GB of storage, and a 1.7GHz dual-core processor, while the 5.8-inch model has a qHD display, HSPA connectivity, 8GB of storage, and a 1.4GHz dual-core processor. Both have IR blasters for controlling televisions, an 8-megapixel camera, 1.5GB of RAM, a microSD slot, and are running the latest version of Android, 4.2 Jelly Bean.

Pricing for the models isn't clear, but from the specifications we expect them to be cheaper than the Galaxy Note 2 and Galaxy S 4. Some of Samsung's software features, including Air View and Pop-Up Play, are making their way over to the new devices. Samsung hasn't detailed exact availability, but says the Galaxy Mega 5.8 and 6.3 will launch in Europe next month before gradually expanding to other territories. UberGizmo got an early look at the 6.3-inch model and were reasonably impressed — for scale, check out their comparison shot with a Galaxy Note II below. We'll reserve judgement until we get a chance to try the Galaxy Megas out for ourselves. 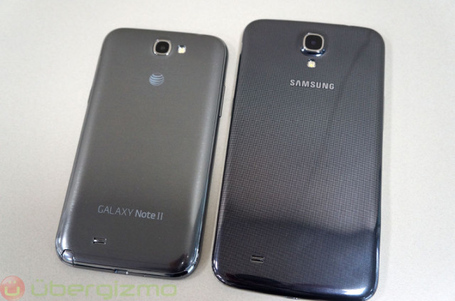