Where did we come from? Prehistoric fossils may rewrite human evolution

Share All sharing options for: Where did we come from? Prehistoric fossils may rewrite human evolution

Painting by John Gurche, courtesy of Lee Berger and the University of the Witwatersrand

A collection of prehuman skeletons has sparked intrigue and debate in the scientific community, eliciting calls to redraw — or at least reconsider — mankind's evolutionary map.

On Friday, an international team of researchers will publish their latest findings on Australopithecus sediba — a uniquely puzzling prehuman species that lived nearly 2 million years ago. Led by Lee Berger, a paleoanthropologist at the University of the Witwatersrand in Johannesburg, South Africa, the research reveals new insights about the way Au. sediba walked, chewed, and moved, lending support to Berger's claim that the species is a direct human ancestor.

Experts have long identified Homo habilis as the most likely ancestor to Homo erectus — the precursor to modern man — but Berger’s research points to an alternate lineage. Au. sediba predated Homo habilis by nearly 100,000 years, according to some estimates, and its "mosaic" blend of ape and human qualities suggests a different evolution from human ancestors (known as hominins) to our own Homo genus.

"Everywhere we see evidence of evolution."

The six papers to be published in Science tomorrow only underscore this hypothesis. A study of Au. sediba's dental structure shows that while the species shared some similarities with the Homo genus, it was distinct from the Au. afarensis — a class of East African hominins that includes Lucy, the famed prehistoric skeleton discovered in 1974.

This so-called "Lucy species" has been widely accepted as the common ancestor from which all prehumans sprung, but Berger says this hypothesis now seems "very unlikely." Instead, he argues, it appears that Au. sediba represents a "ghost lineage" completely divorced from Lucy and her East African contemporaries.

The team's other studies reveal similarly mosaic qualities in Au. sediba's spine, thorax, and jawbone — a feature they found to be surprisingly humanlike in structure, and markedly different from Au. africanus "ape-man" fossils found in the same region. The creature's arms exhibit qualities ideal for climbing, but its fossilized lower limbs point to bipedal movements, as well.

"Au. sediba looks more like Homo than any other australopith known," de Ruiter explained in an e-mail to The Verge, "and for this reason represents an excellent candidate ancestor for the genus Homo."

Friday's publication comes after more than four years of research on Au. sediba, marking one of the most comprehensive studies of a prehuman species ever conducted. The species was first discovered in 2008, when Berger's then-nine-year-old son stumbled upon a fossilized clavicle bone near the Malapa caves of South Africa. Berger later discovered more bones belonging to the specimen — a young boy — as well as the partial skeleton of an adult female.

Subsequent research on these and other samples returned enigmatic results. Its hand, for instance, featured elongated fingers ideal for scaling trees, as well as an unusually long thumb that Au. sediba, like early humans, could have used to hold tools. Standing at little more than four feet tall, the species also had a small, apelike brain, albeit one with a more human shape and organization. 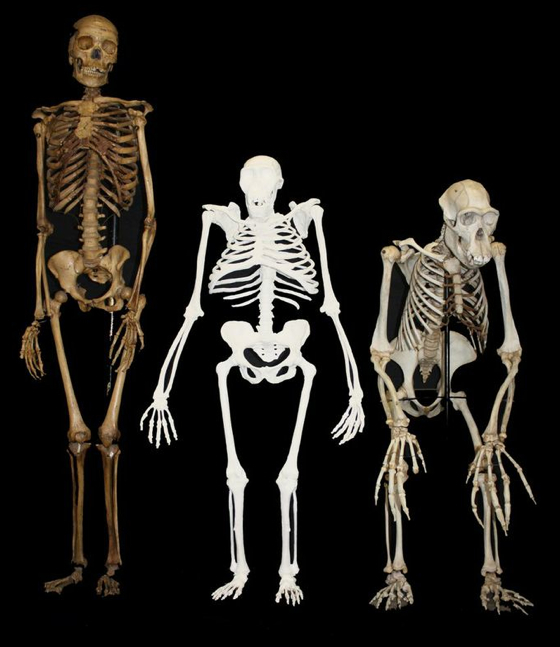 De Ruiter acknowledges that these findings remain open to interpretation, largely due to a still-incomplete fossil record. Nevertheless, he says that the growing body of evidence strongly suggests that "we are looking at the ancestor of the genus Homo, or at least a very close relative of that ancestor."

Detractors have argued that Au. sediba is too young to have been a direct ancestor to the Homo genus, citing some Homo habilis fossils estimated to be 2.3 million years old. Berger and his team dispute these estimates, instead claiming that Homo habilis arose 1.9 million years ago, and that purportedly older fossils are too fragmentary to rely upon. They also note that the remains found in South Africa are but one sample; there could be far older Au. sediba fossils that have yet to be unearthed.

Teasing out this lineage remains a daunting task, despite the relative abundance and remarkable quality of Au. sediba fossils.

"an unprecedented look at an early hominin species"

"We're getting an unprecedented look at an early hominin species in a field that is generally identified by fragments, and often very small fragments," Berger tells The Verge, citing the species' nearly intact hand, leg, and skull bones. "So we're beginning to see a record that's more complete than we've ever had before."

But Berger's blessing may also be a curse. Without well-preserved fossils from other species, it's difficult to piece together a clear evolutionary trajectory, leaving the field in a haze of speculation.

"Sediba stands as this remarkably complete nature, but there’s almost nothing to compare it to in Homo habilis," Berger explains, though he notes that amidst this uncertainty lies an exciting opportunity — a chance to rewrite human evolution, or, at the very least, to explore new avenues.

"This leaves us with an enormous question," he says. "We thought we knew how this part of human evolution worked, and sediba comes along and says, 'Here's another option.'"