Stanley Kubrick’s classic The Shining is about a family facing death in the isolated Overlook Hotel. Or maybe it’s an indictment of genocide, whether American or German. Maybe it’s an apology for faking the Moon Landing, or a series of intricate visual puns. It all depends on who you ask — and Rodney Ascher, director of the recently-released Room 237, has asked just about everyone. Ascher’s first full-length documentary, Room 237 explores the weird world of alternate Shining interpretations, talking to five men and women with often wildly divergent ideas about what the movie means. We sat down with Ascher to talk about Stanley Kubrick, narrative, and how technology has changed the way we watch film.

Though a huge boom in Shining theories has been fostered by the internet, several of Room 237’s subjects recall a time when they couldn’t count on anyone else understanding their interest — or, until home video, even being able to verify their theories. Jeffrey Cocks (who discusses Holocaust themes) has published several books, and reporter Bill Blakemore’s essay on The Shining and the Native American genocide was published in 1987 and is still widely cited. Today, theorists are more likely to have websites or video series. "People are both able to watch the movie closer than they ever could before, and that they are able to share ideas in ways that are more powerful than you ever had before," says Ascher.

Eventually, one theorist screened it running forward and backwards on the same screen

Despite its age, Ascher believes nothing can touch The Shining for interpretive popularity. "Inception was maybe going neck and neck with it for a little while while we were working on [Room 237] but very quickly tapered off," he says. "People are more actively combing through The Shining in microscopic detail than they did when it was new or are doing for any contemporary film." With every new technology — from VHS to Blu-ray — there’s a new way to watch the film; eventually, one theorist screened it running forward and backwards on the same screen, looking for more visual quirks. "After you’re done watching and re-watching in successive mediums," Ascher says, "the final stage — or maybe there’s still another one coming — is to manipulate the movie and watch it in a new way."

For Room 237, Ascher chose to discard the standard talking-head documentary style, leaving the subjects as faceless voices and cutting together scenes from Kubrick films that echo what they’re saying. A comment about feeling watched by unknown agents, for example, is paired with a clip of Tom Cruise looking around the corner at a shadowy figure in Eyes Wide Shut. It sounds gimmicky, and it is — but it works flawlessly, in no small part because so much of the subjects’ theories are based on the same principle of reinterpreting and recontextualizing everything. It’s a way to drive home how easily one can find weird synchronicity in film, whether you’re trying to pick out hidden meaning or just doing the basic work of connecting what you see to what you hear.

Room 237 doesn’t force you to subscribe to the interviewees’ opinions, whether they involve analyzing the house’s impossible layout or asserting that Kubrick faked the Apollo 11 mission. Some pieces of each puzzle will seem inarguable — whatever his reasons for doing so, Kubrick seems to have intentionally created a set that couldn’t possibly fit together — but it’s harder to argue that Jack Torrance’s choice of typewriter is supposed to evoke the Holocaust, or that Danny’s Apollo 11 shirt is a nod to conspiracy. Ascher isn’t, however, asking us to impartially observe or mock either. "Our idea was to try to present each of these ideas as persuasively as possible," says Ascher. "And that’s an interesting challenge… trying to make the audience of 237 watch The Shining through the eyes of these other people." He also quickly scrapped the idea of trying to find a "true" meaning: instead, the film is "about what happens when the movie leaves the filmmaker’s hands, and the audience is left to put the pieces together with whatever tools they have."

The result is a journey through an alternate landscape where even the most far-fetched ideas can seem real, and where every detail becomes a doorway to another world. Room 237 plays off the satisfaction of feeling like you’re being let in on a secret — sometimes, that’s being shown details you’d never catch on your own; sometimes, it’s recognizing a clip from A Clockwork Orange or 2001: A Space Odyssey and smiling at the deadly serious association it lends to an offhand comment.

I wouldn’t say I came away from the film convinced of any of the theories, but it’s a rare and uncomfortable moment when the attempt completely breaks down, and you’re told something you just can’t square with your own perception. At one point, a subject points out a cloud in the opening scene, insisting that Kubrick has put his own face in the sky. Though even he admits it’s difficult to see — probably because it isn’t there — it’s almost frustrating not to be able to accept a part of his theory, no matter how weird it might sound. 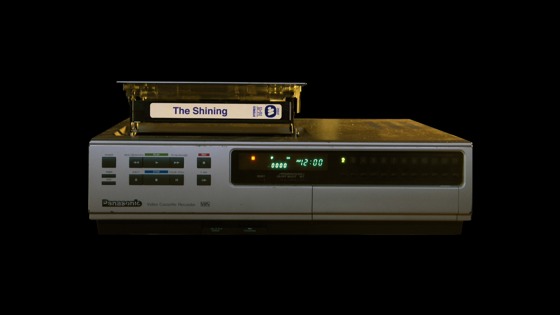 It’s possible to read meaning into The Shining without having to believe Kubrick put it there. At one point, Cocks suggests that his interpretation remains valid no matter what the intent, bringing up the notion of the "death of the author." But he’s a lone outlier among the subjects, who often attribute Kubrick with preternatural intelligence. The director is described over and over as a bored genius, a man with an IQ of over 200, a "supermind" dreaming for humanity.

"Unlike me, Kubrick was smart enough to not do any interviews."

"Unlike me, [Kubrick] was smart enough to not do any interviews," jokes Ascher. "Whatever his reasons for being kind of camera-shy himself, that only helped contribute to the aura of the genius mad scientist up at the top of the mountain." Add to that the fact that no matter what The Shining is about, the attention to detail is indubitably there, as is Kubrick’s control over his medium. A David Lynch film might be just as ripe with hidden meanings, but it’s harder to attribute him with the same level of meticulous planning. "It may be overstating things to compare The Shining to the Bible," says Ascher, laughing, "but I think if you’re going to look at the Kabbalah or other deep readings of that, a lot of it is based on the idea that we are dealing with an infallible author."

In the end, though, Ascher thinks The Shining continues to fascinate for a simple reason: it’s enjoyable. "It pretty firmly lands smack in the middle of art and entertainment," he says. "There are a ton of other films more plainly symbolic, but this one is more entertaining and more endlessly watchable than most of them."