Arctic will be basically ice-free by summer 2050, NOAA study says

Arctic will be basically ice-free by summer 2050, NOAA study says

It's been apparent for several years now that the Arctic is melting. But it's melting much faster than most studies previously predicted. As early as 2020 and no later than 2050, it will be almost completely ice-free, according to a new paper out this week. "It's pretty scary how rapidly all this Arctic change is happening," said James Overland, lead author of the new study, and a research oceanographer with the US National Oceanic Atmospheric Administration (NOAA). "The Arctic is a real indicator of global change here, that's why we wrote the paper," he told The Verge.

"It's pretty scary how rapidly all this Arctic change is happening."

Specifically, Overland explained that the loss of the majority of Arctic sea ice during future summer melt seasons will have three major impacts: it will open the door for drilling and shipping in the region, it will ruin the habitats for polar bears and marine mammals, and eventually, it could cause more extreme weather events for us who live down in the more southern latitudes. "It's hard right now to say that 'this particular snowstorm two years ago was caused by what was going on in the Arctic,' or that the path of Hurricane Sandy was caused by Arctic changes, but there are indications we will see more extreme weather as the Arctic warms up." 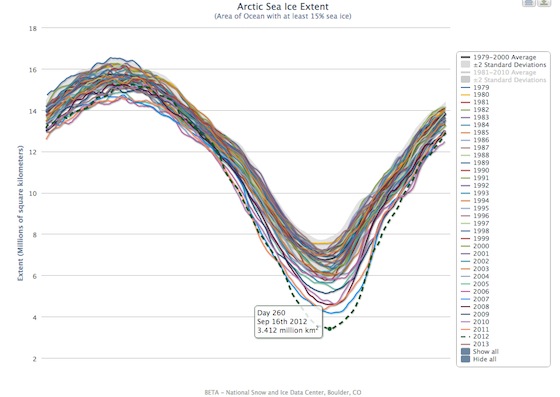 Graph of sea ice loss maximum and minimum from 1979 through 2013, from the National Snow and Ice Data Center.

It's important to point out that the Arctic is likely to still always be covered by a little bit of ice, according to Overland and his colleague's projections, and other future models of Earth's temperature. "Ten to fifteen percent will still be there during the winter," said Overland. Every year, large areas — hundreds of thousands of square miles across — of Arctic sea ice melt during the summer and refreeze each winter, part of a naturally occurring seasonal process.

"There are indications we will see more extreme weather as the Arctic warms up."

But the amount of sea ice lost in the summer has been exacerbated in recent years by global warming, which Overland and others have linked to a rise in human produced greenhouse gas emissions. Last year saw a record amount of sea ice melt, according to NOAA. And overall, the trend is going way down. "We've already lost three fourths of the sea ice volume since the 1980s," Overland said. 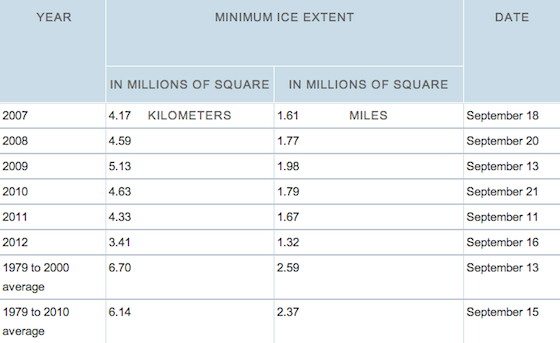 Chart of Arctic sea ice minimum and maximum from 1979 to 2012, from the National Snow and Ice Data Center

Previous studies have projected that the Arctic could see its first ice-free summer sometime between 2015 and 2100. The new meta-study (a study of 36 previous computer models used by the UN and others to predict Arctic climate change) published this week in the journal Geophysical Research Letters, indicates that the answer is likely right in-between those extremes. The study attempted to narrow the discrepancy between previous ones by looking at more recently observed data. "Eighty percent of the [previous] models are too slow to start with, and probably more than that." Overland told The Verge.