"Release early, often, and with rap music” is the motto of the Free Art & Technology Lab, aka F.A.T., an internet-based collective of culture-jamming jokesters that has been mashing memes, art, and activism online since 2007. And it does a pretty decent job describing what they do.

On display at the Eyebeam Art + Technology Center in New York City, the group’s five-year retrospective F.A.T. GOLD is a kind of graffiti art carnival that only the internet could produce: costume shop gold chains are adorned with iPhone bling, a wall is plastered with the digitally battered-and-bruised face of Mark Zuckerberg, and a seated dummy is covered in yarn stretched from its head to the recognizable outline of a laptop computer. 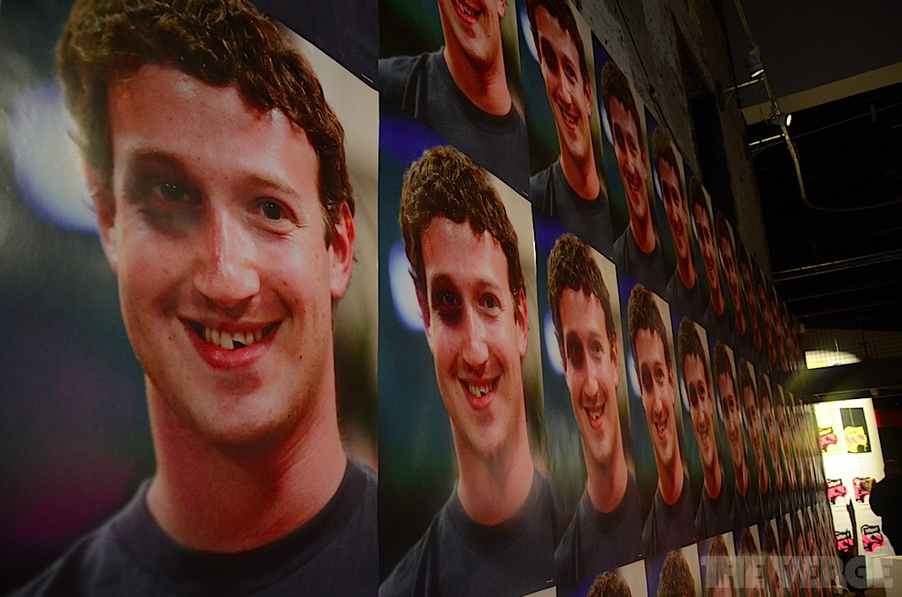 It’s exactly the kind of lighthearted irreverence F.A.T. Lab has become known for: contemporary art tempered with the raw viral power of an internet meme. The cavernous venue is packed as people line up for free booze and a turn at a nearby kiosk that links your Facebook account to a Big Brother-approved "national identity" card. Against the rear wall is "Webcam Venus," a recent series by Addie Wagenknecht and Pablo Garcia that features ornately-framed portraits of online sex cam performers, instructed via live chat to mimic poses seen in classic works of art. Nearby, there’s a QR code graffiti stencil set that produces the effect of 19th Century hobo glyphs, and a glass display holding the likenesses of Barack Obama and Mitt Romney as a set of 3D-printed dildos.

Co-founder Evan Roth sees the humor as a means of inclusive activism, a way of engaging with urgent themes and ideas — free speech, open source technology, and the like — that expands the conversations beyond the art and tech circles where they normally occur.

"There’s this dialogue that goes on in the arts that doesn’t just have to happen in art galleries," he says over the blaring speakers. "The idea is trying to make this kind of pop media that people can consume for fun, but hopefully there’s a message in there somewhere."

Originally formed by members of Eyebeam’s Graffiti Research Lab, public art has always been a huge part of F.A.T. — whether "public" is on the street, on the internet, or somewhere in between. Probably the biggest piece on display, Theo Watson's sprawling "Every GML" projection, is composed of 40,000 personal signatures made with the Graffiti Markup Language he and Roth created. Next to it is "WiFi Tagger," another project by Addie Wagenknecht that lets anyone with hacked router firmware (instructions here) vandalize their local area with fake wireless access points. 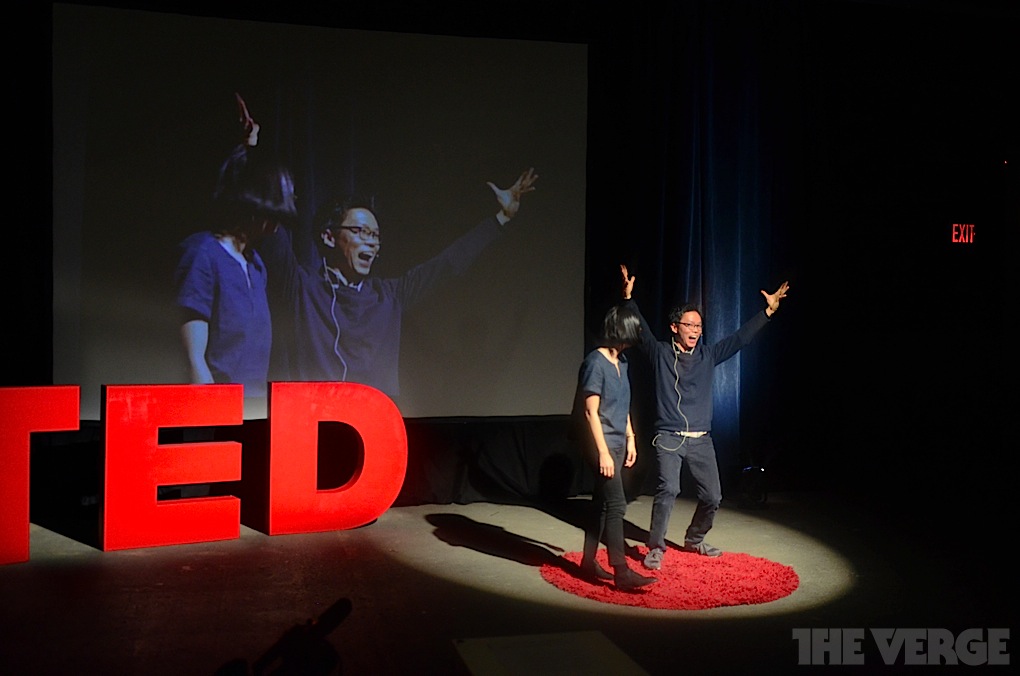 Occasionally they break a law or two: outside, famed NYC graffiti artist and F.A.T. member KATSU let loose on Eyebeam’s facade with a fire extinguisher full of gold spray paint, inadvertently tagging the neighboring Paula Cooper Gallery in the process. Needless to say, Paula Cooper wasn't too thrilled about her new bling. "That wasn’t a provocation, it was honestly an accident," Roth reassured us. Though the event was somewhat revealing of the sharp divide between some art galleries in Manhattan's upscale Chelsea neighborhood (in this case, literally a line in a wall).

Roth is standing in front of his newest piece, "Ideas Worth Spreading," a full stage and video recording setup that allows anyone to record their own TED talk, complete with awkward microphone headset and trademark-infringing stage props. It’s great for a laugh and perfect for a photo op. But Roth urges deeper participation, encouraging visitors to bring their own slides and upload their talks online to fully experience the kind of empowerment normally reserved for TED’s intellectual elite. 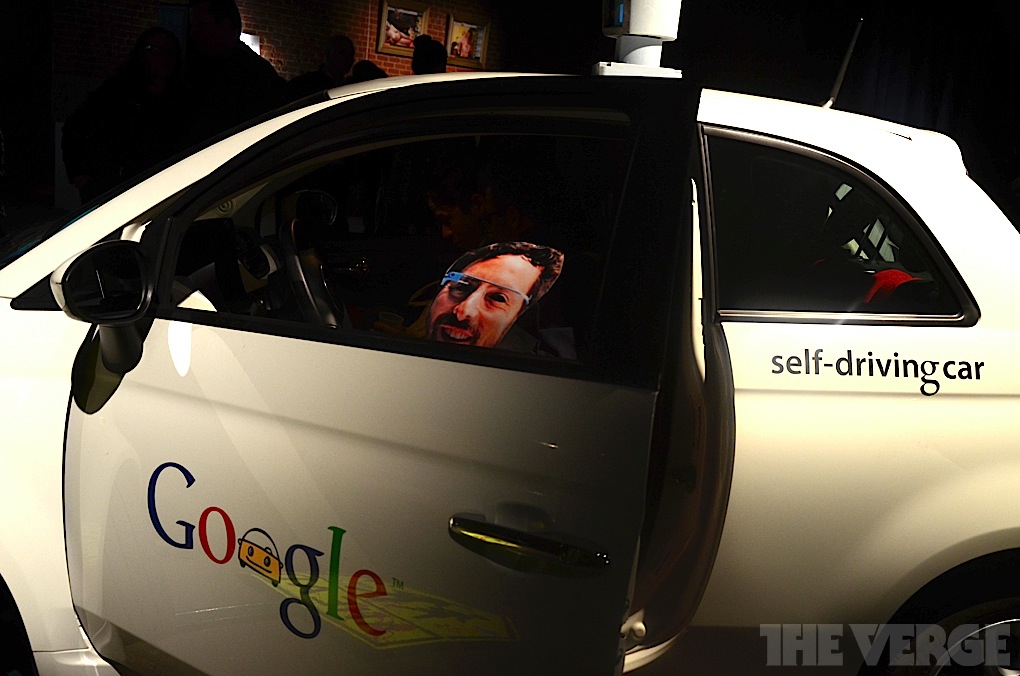 And then there’s the Google self-driving car... or at least what looks like one. It’s parked suspiciously in the center of the space, surrounded by a crowd wearing Sergey Brin cut-out masks and what looks to be Google Glass — a closer look reveals they’re actually counterfeit 3D-printed frames made to look like Glass; the folks wearing them are coincidentally mingling with a lone Google employee wearing the real thing.

Both technologies are almost like phantoms right now: futuristic, but just "real" enough to be ripe for trolling (or as F.A.T. calls it, "intervention"). So the F.A.T. crew took the car for a spin out near Google’s headquarters in Manhattan, using some costumed trickery to make it look like the car was driving itself. Confusion ensued. 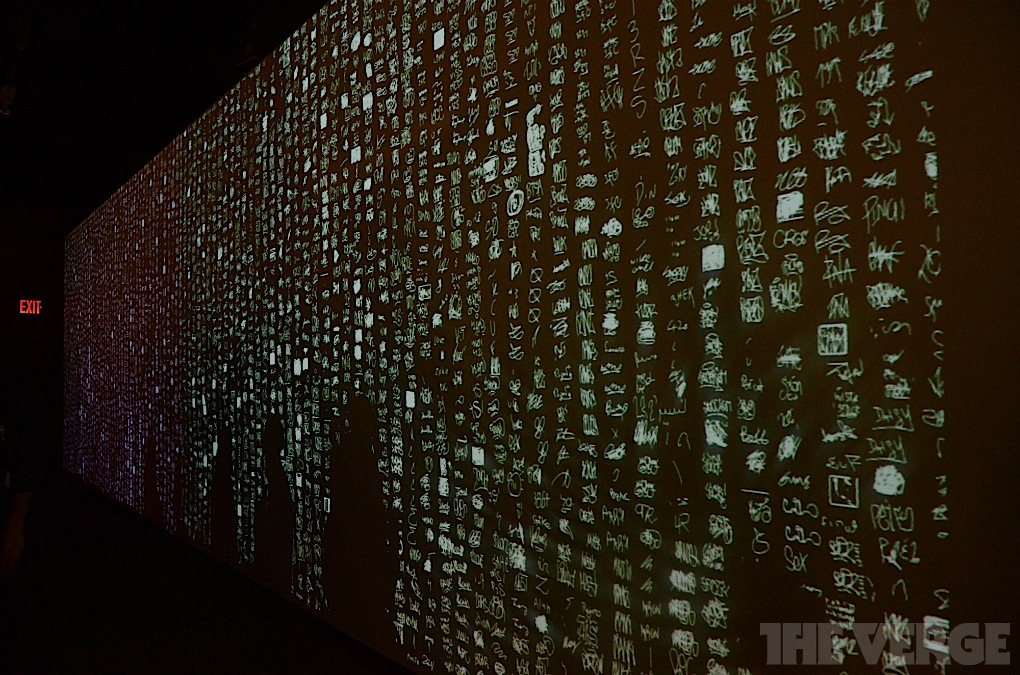 "A lot of us are interested in how the idea of hacking can be applied to other things," says Roth. "A lot of these projects are really more social hacks than technical hacks. When you’re in that Google car, people treat you differently [...] When you step onto that stage and post the video of your TED talk on the internet and watch the comments you get, it’s kind of like giving people a taste of what that empowerment feels like. I think that’s really what hacking has to offer."

Warning: Some mild nudity in gallery below.