Behind schedule and over budget, it might not even work at all

Share All sharing options for: Regulators and railways spar over Positive Train Control, a controversial safety system that won't arrive in time

It was late afternoon on September 22nd, 2008 when a four-car Metrolink commuter train collided head-on with a 17-car Union Pacific freight train just outside Chatsworth, California. The sound of crashing metal could be heard for miles around the suburb, some 30 miles northwest of Los Angeles. Aerial photos and news reports that evening depicted a scene that looked like a bomb had gone off on the tracks. However, the cause was not a terrorist attack, or a detonation of any type, but rather the locomotive’s engineer, who missed a signal to stop while reading and responding to text messages on his cell phone. His final text — "yea... usually @ north camarillo." — was sent about 20 seconds before impact, when the engineer was killed, along with 24 others, most of whom were on their way home from work. 135 people were injured, 46 of them critically. Damages were estimated at about $12 million. The Chatsworth collision is considered one of the worst train accidents in United States history.

Rules already existed regarding text messaging while at the helm of a million-pound train: it's not allowed. But the National Transportation Safety Board identified another precaution that could’ve helped to avoid the tragedy.

"Contributing to the accident," the report read, "was the lack of a positive train control system that would have stopped the Metrolink train short of the red signal and thus prevented the collision."

Positive Train Control (PTC) is a system designed to make trains safer and better organized. It uses GPS to take over controls from the engineer if he inadvertently loses control or finds himself heading in the direction of another train; it also makes sure trains are running when and where they’re supposed to. Ideally, dispatchers in centralized locations all over the country already take care of those tasks — but they’ve got a lot of trains to manage and a lot of miles to cover, so, in theory, PTC will help those dispatchers do their jobs better and more efficiently.

It also might make their jobs redundant, but that’s just one potential problem among many.

Similar systems have been installed on local tracks. The Long Island Rail Road’s signaling system, for example, automatically enforces speed limits and slows trains down if they approach other trains. But attempts to make such systems national have failed. Mostly, the issue is scale and cost: there are about 100,000 miles of "Class I" rail lines in the US, major lines run by the seven largest railroad companies. Installing a uniform PTC system on those lines and about 15,000 miles of regional rails has proven too expensive for rail companies to pursue without some external goading.

But goading is exactly what the Chatsworth collision provided. The legislative response to the crash was swift. A few weeks afterward, Congress discussed the Rail Safety Improvement Act of 2008, which would set a deadline of December 15th, 2015 to make PTC mandatory on every mile of the U.S. rail system. By October 16th, 2008 — less than a month after the crash — President George W. Bush signed the bill into law.

One might’ve thought that was the end of the discussion. But as the deadline approaches, the law’s benefits start to sound less and less optimal.

Questions began to arise as early as 2010. The Government Accountability Office (GAO) released a report saying that, despite the billions of dollars needed to fund PTC, the system would only help to avoid about 30 percent of rail accidents. The report also said "technologies besides PTC hold promise for improving safety by addressing other accident causes, such as problems with track or equipment." 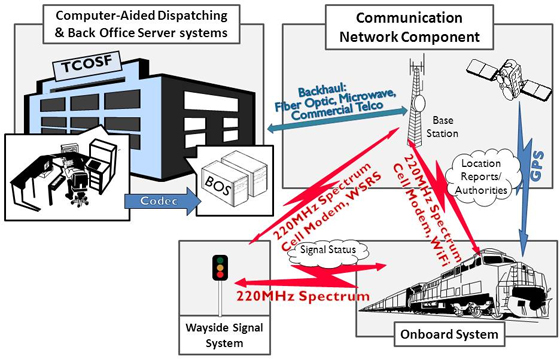 The GAO report suggested the law should push forward and that all involved parties should check back in 2012 when the Federal Railroad Administration (FRA) — the bureau of the U.S. Department of Transportation that oversees train regulations — would have its own report about how things were progressing.

Union Pacific’s CEO called the law a "terrible waste" in 2011.

And by August last year, things weren’t looking much better. The much anticipated 2012 FRA report found that, "the majority of railroads will not be able to complete PTC implementation by the 2015 deadline" and that Congress should extend its deadline indefinitely.

That’s pretty much where we are today. And while PTC’s federal implementation gets attention whenever train crashes make headlines, there are plenty of learned people arguing that Congress needs to take a step back and rethink the 2008 PTC law.

Charles Banks is one of them. He’s president of rail consulting firm R. L. Banks and Associates. He called PTC’s implementation "terrible" and said it’ll cost as much as $12 billion to get it running. Despite that cost, he told me the PTC technology might already be obsolete.

"Instead of improving the technology, they are overlaying new tech onto existing communications and signals systems," he said, and that’s a problem.

"If you make the wrong investment, it actually postpones making the best investment," he said. Rushing PTC’s implementation now, in other words, will stall any tech advancements in the future.

David B. Clarke, Director of the University of Tennessee’s Center for Transportation Research, puts it another way.

PTC is "a poor man’s solution," he said. "It doesn’t go nearly as far as the railroads would like, and it’s not clear that it does what safety organizations want." Plus, there’s the cost. While Clarke’s estimate is slightly lower than Banks’, he still put the figure at "in excess of $10 billion." (Others put it as high as $20 billion.)

"[PTC] doesn’t go nearly as far as the railroads would like, and it’s not clear that it does what safety organizations want."

It’s difficult, however, to argue against a technology that could save lives. A passenger on a derailed train in 2003 recently told the Chicago Tribune, "I think somebody’s life is a lot more important than dollars."

But Banks isn’t so sure.

"Yes, I think the railroads should be as safe as possible," he said. "But it’s insane to force railroads to spend billions in private capital on this project when less than 40 people have died in the last decade in [U.S.] rail collisions while nearly 40,000 people get killed on the highways every year."

The PTC law, Clarke adds, "was a knee-jerk reaction to a tragedy."

"We can speculate about why it got the level of visibility it did. But the bottom line is, Congress passed something that existed in theory and now [railroad companies] are forced to try and make it happen."