Staying safe: how can we find and defend against explosives?

Staying safe: how can we find and defend against explosives?

It's hard to protect large crowds, as Monday's attacks made painfully clear, but it's a problem that has inspired a host of technological solutions from a wide range of groups. The biggest difficulty, according to many, is the tension between protecting the public and respecting the event itself — but as security questions circulate with newfound urgency, it's a difficulty many are willing to approach head-on.

Authorities are torn between protecting the public and respecting the event

"In an event such as the Boston Marathon, with tens of thousands of participants and observers distributed over large areas, the challenge to eliminate any possible threat is significant," said Carl V. Jerrett, Ph.D., program manager for Applied Research Associates, Inc., which has developed mobile apps for the Department of Homeland Security. "It is often the case that authorities must balance between eliminating any possible threat and allowing for meaningful public participation," Jerrett added.

The most common answer is to find the bombs first. Trained dogs are still the gold standard for clearing an area for explosives, but in this case, they weren't enough. The police reportedly swept the area with a canine squad before the event and detected no explosives, leading to speculation that the bombs were planted during the race itself. The next step up is electronic trace detection, most commonly used by the TSA's "puffer" machine, but that would require establishing a perimeter, checkpoints and a safe zone, which is more security than most organizers are willing to accept.

"If I'm planting a device, I can see that dog coming."

Scanning once a crowd has assembled is much harder. "Once the crowd gets dense, using the dog to get through the crowd becomes arduous." That's James Viscardi, VP of Emergency Response for Smiths Detection, one of the contractors that sells trace-sensing devices to law enforcement agencies. "If I'm planting the device, I can see that dog coming and plant it somewhere else." Smiths' solution is a handheld version of the TSA's "puffer" machine, a dustbuster-sized device that's often used to protect subways but is still rare in event security. 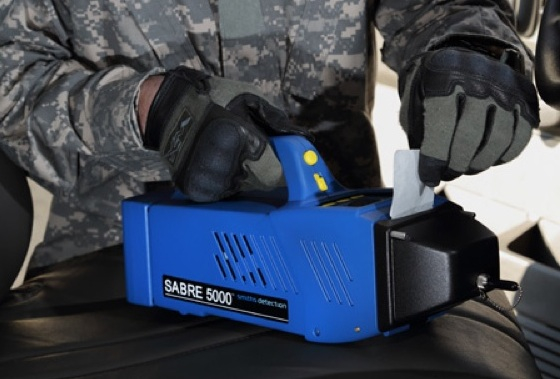 There are also technologies to minimize explosions and mitigate the damage, like the portable force protection walls developed by security contractors. Used widely by militaries in war zones and security checkpoints overseas, some were also set up temporarily in London to safeguard the 2012 Summer Olympics. "The technology is just starting to trickle down to police forces and civil agencies," said Keith Misukanis, sales director at Defencell, a company that made some of these products for the London 2012 games. Defencell's force protection barriers, which are made up of "nonwoven material," earth, and gravel, are designed not just to handle explosions and shrapnel, but any type of force — from flood waters to vehicles. "The system is made to hold energy and to dissipate it over its multicellular structure," Misukanis told The Verge, comparing the layers of material in his company's shielding to a larger, more robust version of kevlar in bullet proof vests.

But deploying these over a wide enough area to shield or help protect participants in a widespread outdoor event such as the Boston Marathon, which covered 26.2 miles of public streets, would require a major cultural shift.

We "must continue to challenge ourselves and each other to be more effective against these threats."

Ultimately, the response and preparedness for potential explosive threats is as much a policy issue as it is technological. In February of this year, the White House released its own report on "Countering Improvised Explosive Devices," in which the President called upon the government to "challenge ourselves and each other to be more effective against these threats," releasing eight new ideas for "enhancing effectiveness" of security against IEDs "at home and abroad." No new money was allocated toward the effort, however.

Whether the Boston Marathon bombing proves to be an IED or a commercial grade explosive device remains to be seen, but there's little doubt the events will spur further efforts by government and the private sector to improve security. None of these technologies offer a complete answer, but together, they may provide new ways for us to defend against a threat that's often difficult to predict, let alone prevent.

Russell Brandom contributed to this report.