What we know about the Boston Marathon explosions: 173 injured, no one in custody

What we know about the Boston Marathon explosions: 173 injured, no one in custody

The investigation is just beginning, but FBI says there's now 'no imminent threat'

As police and the FBI investigate two explosions at the Copley Square finish line of the Boston Marathon, a more solid picture is replacing the fleeting and often contradictory reports of yesterday, bolstered by a press conference this morning. There is still no official suspect, and police have repeatedly denied that anyone is in custody, but Attorney Carmen Ortiz has confirmed that authorities searched an apartment in Boston suburb Revere. Unnamed officials tell CNN that the search was connected to a Saudi citizen on a student visa, who has apparently been questioned in relation to the case. It's not, however, meant to indicate that he is responsible for the attack, and police have said they've questioned multiple people and will be analyzing footage of the event over the coming days.

As of this writing, two explosive devices are known to have detonated within a few seconds and a hundred yards of each other shortly before 3pm ET yesterday, catching runners and spectators in the blasts. While the exact number of people injured has varied, Governor Deval Patrick said this morning that at least 150 had been hurt, "some gravely;" the total number of injured and deceased taken to hospitals was later given as 176. Three people have been confirmed dead, one of them identified by the Boston Globe as eight-year-old Martin Richard. Authorities say that 17 people are in critical condition as of this morning, making it possible that more deaths will be reported. The area around the finish line remains locked down as a crime scene, and police presence will be stepped up around Boston, including at Logan Airport.

No one in custody #tweetfromthebeat via @cherylfiandaca

Police have refuted rumors that more unexploded bombs were found

Throughout the event, there were reports of more bombs, and of a possible third explosion at Boston's JFK Library. At this time, officials have confirmed that two devices — the ones involved in the explosions — were recovered during sweeps, but they refuted rumors that more were found. Over the past day, police have methodically searched packages left around Copley Square, initially reporting some as suspicious and attempting to "deactivate" them, but reports of up to seven devices appear to be incorrect. The JFK Library incident, meanwhile, has been confirmed by the library as a fire that started in the mechanical room. Police have not ruled out that it could be connected to the explosions, but no link is being reported at this time, and Police Commissioner Ed Davis said last night that it could have been an unrelated fire.

In a short statement yesterday, President Barack Obama avoided using the word "terror," urging people not to jump to conclusions before all the facts are known. Instead, he promised that "we will find out who did this; we'll find out why they did this. Any responsible individuals, any responsible groups will feel the full weight of justice." Others in the White House, however, have been less equivocal. Bloomberg and other outlets quoted an official calling the explosions "clearly an act of terror." As of a press conference last night, the FBI has said that it will be taking control of the investigation, with help from police and other agencies.

Thanks to generosity of volunteer blood donors there is currently enough blood on the shelves to meet demand. #BostonMarathon

Police, charity groups, and companies have stepped up to provide resources to Boston residents and others. The Red Cross urged people to use its Safe and Well tool to keep track of loved ones, and Google launched a Person Finder system for the Boston Marathon explosions. The city of Boston has set up two hotlines: families of victimes are urged to call 617-635-4500 for information, while anyone with potential information on the case should call 800-494-TIPS. While the Red Cross said last night that it had enough blood to meet demand, people can still set up appointments to donate blood in the area through this page.

The police, meanwhile, are still urging anyone with photos or videos of the Marathon to call the tip line above. "There have to be hundreds, if not thousands, of photos and videos and observations of what happened," said a spokesperson. "I encourage you to bring forward anything." But even as the investigation remains in an early state, the FBI believes there is "no imminent threat" of more explosions, and the people of Boston are returning to the streets — even if it's not, as police have said, remotely "business as usual."

Update: In another address at 11:30am ET, President Obama once again expressed his condolences to victims of the attack, stating that "the FBI is investigating this as an act of terrorism. Any time bombs are used to target innocent civilians, it is an act of terror." Not long after, a source told the AP that the explosives were made of pressure cookers packed with metal and ball bearings, corroborating tentative reports from last night.

Update: At around 2pm ET on the 16th, Boston.com identified the second person killed in the bombings as 29-year-old Krystle Campbell. They also said that the name of the third victim had not yet been released.

Update: As of around 4pm ET, the Boston Globe and others report that police have recovered a circuit board that they believe was used to trigger the bombs. The board was apparently near one of the two blast zones. The FBI has also set up its own tips line for information, at 1-800-CALL-FBI.

In a later press conference around 5:15pm, the FBI stated that it had recovered some fragments of black nylon, possibly part of a backpack, from around the bomb site. It also found fragments of ball bearings and nails, possibly contained in a pressure cooker, though it's difficult to determine specific components at this point. The FBI is also still asking for tips from anyone who might have known or seen the bomber, saying the field of suspects "remains wide open."

Update: At around 9PM, CBS News released images (below) from a leaked FBI bulletin obtained by The Associated Press. The pictures show an exploded pressure cooker and torn black backpack reported to be part of one bomb that exploded during the race. 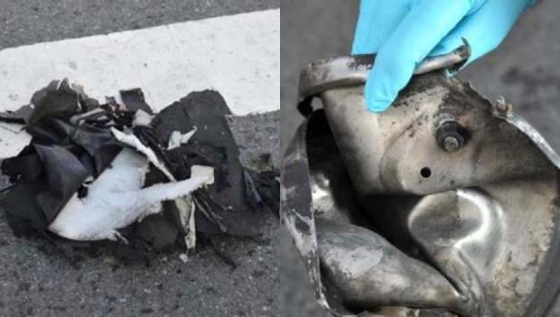