A new version of Disconnect escalates the battle against ad retargeting

Share All sharing options for: Ex-Google ad engineer fights back against advertisers with anti-tracking software

Not long ago, Brian Kennish helped to write the software that serves advertisements around the Web. First at DoubleClick and later at Google, he helped build ad servers and the developer APIs that link advertisers and ad products.

But the more he worked on ad technology, the more concerned he grew about the data advertisers were collecting about him. "I realized that despite having all of this insider knowledge, I myself had absolutely no idea where all my data was going and what was being done with it," Kennish said. "That was a pretty scary proposition."

"Despite having all of this insider knowledge, I myself had absolutely no idea where all my data was going"

IN 2010, Kennish quit Google and started down the path that would lead him to create Disconnect the following year. This week the Palo Alto startup released version 2.0 of its browser extension for Chrome and Firefox, which thwarts companies that profit from identifying consumers through "retargeting." Unlike traditional ad-blocking software, Disconnect permits ads to load in most cases while blocking companies from tracking consumers around the Web.

Retargeting is the reason that you see an ad for Nordstrom on Facebook the day after you searched for it on Google. But not every case of tracking is so benign — and as tracking methods become increasingly sophisticated, it's becoming more difficult for the average person to understand what data companies are collecting about them and how it is being used.

"It turns out there are literally thousands of companies and organizations collecting what I would consider very personal data — the history of the pages that we browse and our search history," Kennish said. "And so today my data is in the hands of roughly 2,000 different companies, and who knows what is being done with it? It's very difficult to even tell. We could pore over the privacy policies of these 2,000 companies to try to figure out what they're doing, but it's quite a stretch to be able to have any idea what our data is being used for." 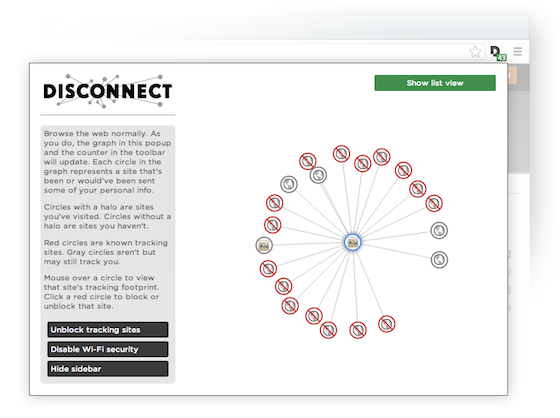 Disconnect, like similar software from Abine and Ghostery, aims to give consumers more control over the data they share. After the extension is installed, an icon in the browser lets users adjust which advertisers and tracking companies can access their data. Disconnect sorts the requests into categories like advertising, analytics, and social. Eliminating them is as simple as clicking a check box.

With the second version of the app, Disconnect engineers have rewritten the software engine with a focus on speeding up load times by filtering out unwanted adware faster. After benchmarking the top 1,000 sites, Kennish claims that Disconnect makes the average page load 27 percent faster and require 17 percent less bandwidth. The company also beefed up its list of third-party tracking sites, and now says its database is the largest in the world. It also updates automatically every week with any new tracking companies discovered by the Disconnect crawler.

The update also shows Disconnect dipping its toes into security, incorporating potential malware sources into its filtering database and including a default setting to force encryption when browsing popular sites over Wi-Fi.

Perhaps most interestingly, Disconnect 2 is launching as pay-what-you-want software. When you go to download the extension Disconnect asks you to contribute, but you can also choose to pay nothing.

"We're sensitive about trying not to create a class system around privacy and security," Kennish said. "Outright charging for an extension when not all users can afford to pay a fixed price didn't feel right for us."

The emergence of Do Not Track legislation and browser settings over the past year has brought new attention to retargeting and the growing amount of data that advertisers are collecting. But the companies themselves are still largely invisible. If nothing else, software like Disconnect makes their work more transparent.

"Over the last couple years, certainly, I think the general public has become more attuned to this issue," Kennish said. "But still it's largely arcane. And the more you know about it, the more troubling it becomes. "