Researchers have presented new findings from the Atacama Large Millimeter / submillimeter Array (ALMA) in Chile which give new insight into the formation of early galaxies. Previously, scientists used the Atacama Pathfinder Experiment (APEX) telescope, which produced the best map to date but didn't provide enough resolution for researchers to be sure how many galaxies were depicted in the imagery. The team says that their results "form the first statistically reliable catalogue of dusty star-forming galaxies in the early universe."

ALMA's sharper results go beyond offering a prettier picture — they actually change our understanding of star formation. The team discovered that up to half of the time what APEX had rendered as a single blob represented multiple galaxies. "We previously thought the brightest of these galaxies were forming stars a thousand times more vigorously than our own galaxy, the Milky Way, putting them at risk of blowing themselves apart," said team member Alexander Karim of Durham University. "The ALMA images revealed multiple, smaller galaxies forming stars at somewhat more reasonable rates."

ALMA was finally completed with all 66 individual antennas last month, but this study was only conducted with less than a quarter of these. Even so, the array performed admirably — it was able to pinpoint each galaxy to a tiny area 200 times smaller than the region captured by APEX, and three times as sensitive. ALMA's speed and sensitivity allowed it to double the total number of observations that had ever been made in the space of a few hours. In the image below, the small red marks denote galaxies captured by ALMA, and the red circles are regions where APEX had detected the presence of galaxies. 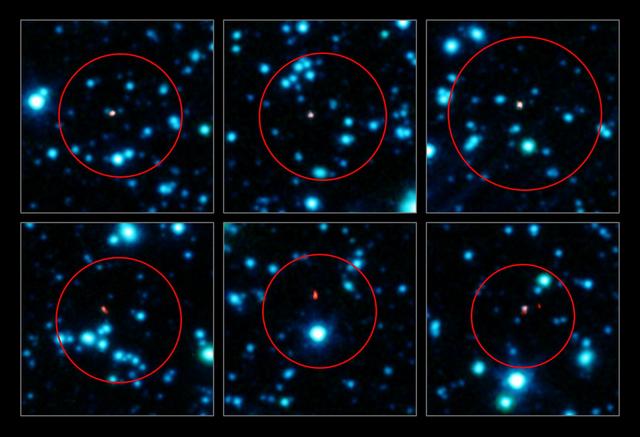 Telescopes that observe light at longer wavelengths like ALMA and APEX are necessary to study the formation of the universe because much of it took place in distant areas obscured by space dust. While APEX uses one large dish-shaped antenna, ALMA works by spreading several similar antennas across a wider distance. However, APEX hasn't quite been made obsolete just yet; team member Ian Smail said that since it's better at scanning wider areas quickly, it'll still be employed before honing more precise results with ALMA.