Windows 8 has an entrant in the high-res laptop stakes

Toshiba has unveiled the Kirabook, an ultrabook with a high-resolution display set for US release in May. The Kirabook will arrive with a 13.3-inch 2560 x 1440 display, 256GB of solid-state storage, 8GB of RAM, and "Windows 8 Home Premium" (we assume that means Pro, as Home Premium doesn't exist). It'll be the first ultrabook to rival the 13-inch Retina MacBook Pro and the Chromebook Pixel in terms of pixel density, although at 221 PPI it falls short of the Pro's and Pixel's 227 / 239 PPI displays. It'll be available with full 10-point multitouch, but Toshiba says it'll also offer models without touchscreens.

At launch, there will be three versions of the Kirabook, but we only know the details of the two higher-end models right now. Both will arrive with touchscreens, but different processors. One is powered by an ultra-low-voltage Core i5-3337U processor, while the more expensive model has the higher-end i7-3537U ultra-low-voltage CPU. When we reviewed the 13-inch MacBook Pro with Retina Display we found it to be a little lacking in power, which resulted in "strained performance." While the two systems run different OSes with different power demands, the same issues could arise here. The option to include a Core i7 processor (our 13-inch MacBook had a Core i5) could help alleviate any performance issues, but ultra-low-voltage versions of Core series aren't directly comparable with the full-fat processors.

Thinner and lighter than the 13-inch Retina MacBook

There are no images of the Kirabook yet, but Toshiba says it's constructed from "A291 pressed magnesium alloy and a honeycomb-base," which it claims is "100 percent stronger than aluminum alloy." That magnesium alloy also makes the machine very light: it weighs 2.6 pounds and measures 0.7 inches thick — that's thinner and lighter than the MacBook Pro (3.57 pounds and 0.75 inches), but slightly thicker than the Chromebook Pixel (0.64 inches), although it does weigh far less.

The low-end model will be priced at $1,599.99, the mid-range model with a i5-3337U processor will cost $1,799.99, while the high-end Core i7 Kirabook will cost $1,999. That's obviously a high price to pay for a laptop, with the low-end model priced $100 more than the 13-inch Retina MacBook and $300 more than the Pixel, although it has more storage than both. Two Kirabook models are already listed on Adorama, and on May 12th it'll go on sale at Best Buy, Amazon, B&H, and the Microsoft Store, as well as directly from Toshiba.

Update: Toshiba still hasn't released images of its new ultrabook, but we've done a little digging and now have a good idea of what the Kirabook will look like. Unfortunately, those looking for a wild design to match the Kirabook's interesting specs will likely be disappointed. Japanese site The Hikaku recently unboxed the DynaBook V632, an ultrabook that features prominent Kira branding and a shape that should be familiar to many ultrabook — and MacBook Air — users. 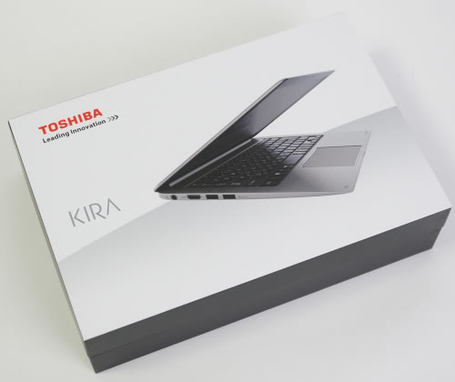 Although the laptop has an ultrabook-standard 1366 x 768 display, its design ID looks extremely similar to an image labeled "Kira ultrabook" on Toshiba's support site (included below), and the port placement looks similar to that depicted in page 90 of the Kirabook support manual. There's also mention of the "honeycomb" construction in another recent Japanese Toshiba model, the R632; the structure supposedly increases the rigidity of the machine. 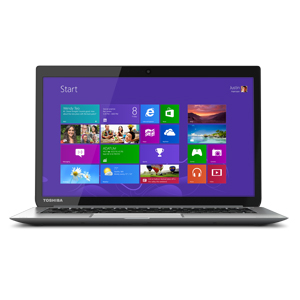