Today LinkedIn is releasing an overhauled iPhone and Android app, as well as a matching mobile website, all with a cleaner, sleeker layout that makes it much easier to navigate. The company's old design featured a sequence of nonstop gray blocks that were packed with information, but now LinkedIn is replacing those with big and bright tiles that give more room to each of the stories in the news stream, similar to the iPad app that it released last year. Larger photos and text fill up every story, and each update is separated by a simple break between the tiles. The new app also replaces the previous version's icon-based navigation menu with a left-hand sliding pane, which includes personalized shortcuts and generally lets users move around the app more quickly. 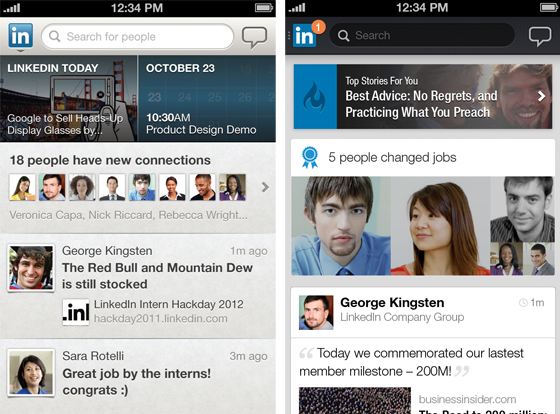 While LinkedIn's updated iPhone and Android app look identical to its new mobile website, the majority of each app is built specifically for its platform, allowing it to run faster because it won't need to download all of its elements from the web. These major app redesigns are the latest in a series of improvements that LinkedIn has made over the past few weeks. Though the changes haven't been groundbreaking, by building a sleek mobile app and adding small features such as tagging, LinkedIn is closing the ground between itself and networks such as Google+ and Facebook.