A foot in the door or too little too late?

Rebuilding Yahoo will require "a series of sprints," CEO Marissa Mayer told investors this week during an earnings call. The first sprint "was all about getting people to believe in Yahoo," she said. The next phase, she said, "is all about building beautiful products and executing well against our business strategy." That phase begins today with the launch of two new apps.

Yahoo is releasing Yahoo Weather for iPhone and Yahoo Mail for iPad and Android tablets. By catering to mass-market interests like weather and email, the company hopes to generate interest across its entire line of mobile products.

"If we do something that you really love in one product, you'll give us a chance on another."

"Marissa describes it as a chain reaction," said Adam Cahan, who leads mobile products at Yahoo, in an interview with The Verge. "I would love for you to use all 12 or 15 experiences that we're going to build for. You probably won't. But if I can get you to use a few, that's success. If we do something that you really love in one product, you'll give us a chance on another product."

"This app really honors the photograph."

Yahoo Weather represents one such attempt to delight users into giving the rest of the company's products a try. Meteorology has been a strength for Yahoo, which has provided data for the default weather app for iPhone since it came out in 2007. But Apple's weather app has evolved very little over the years, and Yahoo decided to build a new app that emphasizes photos over text. Open Yahoo Weather in big cities around the world and you'll see sharp, high-resolution images that have been gathered from Yahoo-owned Flickr. The app displays different photos based on location, weather conditions, and time of day. "This app really honors the photograph," said Marco Wirasinghe, who led the team behind the weather app. "It's taking you to a place. It's a postcard."

Swipe down and the app displays a more traditional forecast, both by hour and by day. Further down lie more detailed weather information (humidity, visibility), an area map, and precipitation. At the bottom of the screen are some of the app's nicest details: a gauge with animated windmills that spin at the current speed of the wind, and a time-of-day app that shows the phase of the moon and the sun's current location in the sky.

One feature weather junkies are likely to miss in Yahoo's app: push notifications for impending rain and snow. But that will be coming in a future update, Wirasinghe said. 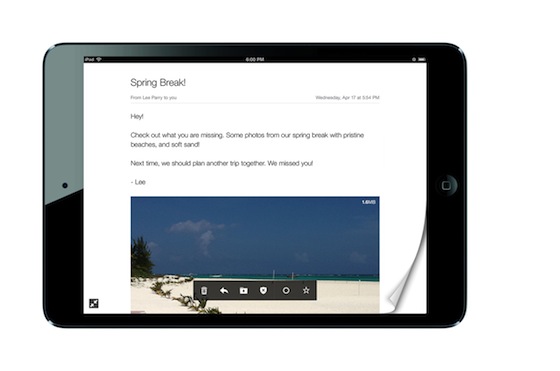 Yahoo's other new release today is a mail app for tablets that focuses on the reading experience. Lee Parry, who led the team behind the tablet app, said Yahoo's data shows its users are more likely to read email on their tablets than they are to write new messages. As a result, the team focused on making it easy to read email on the tablet, starting with a full-screen feature that strips away all the chrome in the design and leaves nothing but the message itself on the screen. It's like Instapaper for email.

The app also turns messages into pages in a virtual magazine. Swipe slowly to the right or left and the page appears to curl up before turning over to the next message. "It's like a magazine," Cahan said, though you can also just tap on the corners of the app to advance through your email more quickly.

Yahoo Mail for iPad and Android tablets builds on a redesign of its mail product that the company released in December. That launch brought speed and a unified look to email clients for iPhone, Android, Windows Phone and the Web. The missing piece was tablets, and Cahan said the new look will be a hit with Yahoo Mail's 105 million daily active users.

"It's kind of one of those obvious moments where you're like wow, why didn't anyone do that?"

The new app also makes it easier to clean out your inbox. New swipe gestures and checkboxes for easy message selection help users archive and delete messages with just a few taps. In some ways the gestures are reminiscent of Mailbox, which Yahoo tried but failed to acquire. "It will be very hard for users to go back to anything but a full-screen experience," he said. "It's kind of one of those obvious moments where you're like wow, why didn't anyone do that?"

Given Yahoo's struggles, it's easy to dismiss the company's latest efforts. But on this week's earnings call, Mayer gave an eye-popping statistic: the company's mobile products have 100 million more users than they did three months ago. That's growth that seems nearly impossible to believe — but it's real, Cahan insisted. Partly the company is benefiting from the rapid growth in smartphone use overall, he said. But moves like the redesign of Flickr for iOS and the new look for mail on the iPhone have helped bring users back to the service.