After a week of teasing, Twitter has unveiled Twitter #Music, its new music discovery and streaming app. The new service is focusing on a recommendation engine that pulls in trending data from across Twitter and your followers to offer up music recommendations from the vast catalogs of iTunes, Spotify, and Rdio. The app will be available on iOS starting today, but there's no Android app quite yet. However, everyone will be able to access Twitter #Music through the browser at music.twitter.com.

As first reported by ABC's Joanna Stern, the service will launch later today, help you find what popular music is trending on Twitter, and will recommend more music based on bands and artists you follow. The app will be organized around four fairly self-explanatory tabs: Popular, Emerging, Suggested, and Now Playing. While those first two tabs are culled from the entirety of Twitter, the last two are based specifically on data coming from the people you follow. The app will also highlight band and artist Twitter profiles, with links to other musicians they follow. 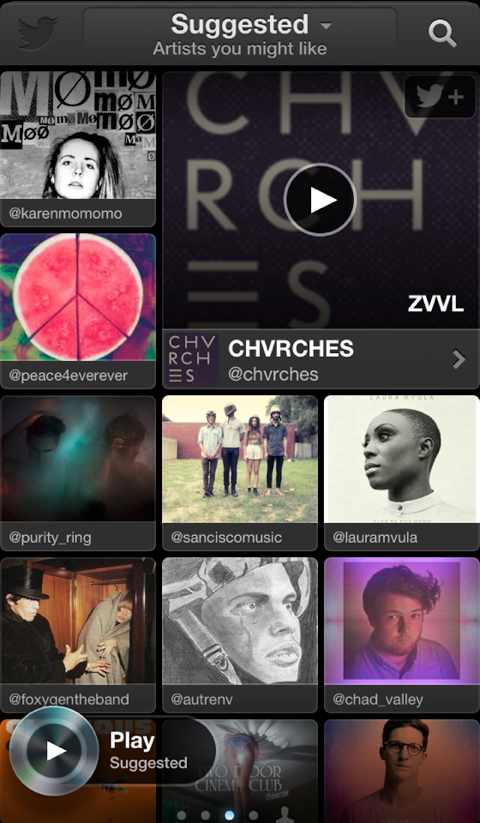 #Music will integrate with ITunes, Spotify, and Rdio, with subscribers of the latter two services able to log in with their accounts to listen to full tracks; iTunes users will have to make do with the standard shortened iTunes previews. Regardless of your preferred service, you won't be kicked out to a different app — you'll be able to stream songs right through the Twitter #Music app.Twitter also says that it is exploring partnerships with other music services, as well.

This launch comes after a week of teasing from various celebrities — Ryan Seacrest began tweeting that Twitter #Music was real, and he was already playing with it. Over the last few days, a number of prominent musicians have also tweeted about the service, but it won't be long before non-celebrities can get their hands on it as well. Intially, Twitter #Music will be available in the US, Canada, the UK, Ireland, Australia, and New Zealand.

Update: Twitter Music is now available to download in the App Store, and the web view has gone live as well.

Matt Brian contributed to this report.

More from this stream Twitter's #Music app: from rumor to launch