Where else can you get judged by a panel of crabs?

Skipping rocks doesn't seem particularly fun or exciting — it's an activity better suited for sad-movie montages than a game you can't put down. But as the Halfbrick developers behind Jetpack Joyride and Fruit Ninja searched for a worthy follow-up to two of the most popular mobile games ever, skipping rocks proved much more addictive than anyone thought.

Fish Out of Water, available today for iOS, began as a dead-simple game in which you flicked your finger left-to-right to skip a rock across the water. "I ended up playing that version for, like, 20 hours," Halfbrick CMO Phil Larsen said, "and all you'd do is skip that one stone and then you'd get your score out of 10." Eventually satisfied that the core mechanic was as addicting as Fruit Ninja's slice or Jetpack Joyride's fly-and-shoot, Halfbrick's developers and designers set about creating a world around it that's much more complex than skipping rocks.

The resulting game takes place in the ocean, and instead of skipping rocks you're skipping fish. Strange, personality-rich fish, with names like Errol and Olympus. The fish love to be skipped, but each does it a little differently — some fish are built to fly far and bounce high, others do better skimming along the surface of the water. You pick three and launch them, and five crabs then judge your performance based on how far you threw the fish and how many times they skipped. Some crabs prefer lots of skips, others are wowed by long throws, and one is just, well, crabby about the whole thing. My first score was a 3.4 out of 10. 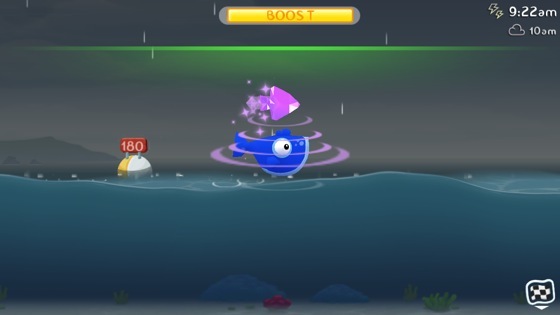 After a quick tutorial, I was playing the game in about a minute, but even after about a dozen hours I still haven't mastered Fish Out Of Water. That's because, as Larsen described, Halfbrick's most impressive and repeatable success is that "we really try to keep things simple, but we add not-immediately-apparent levels of depth." It's the closest thing to a mission statement the company has.

"We really try to keep things simple, but we add not-immediately-apparent levels of depth."

To wit: the weather in Fish Out Of Water changes every hour, on the hour. Some hours the weather is terrible, and getting a great score is virtually impossible (though that didn't stop me from trying). Other times, weather is great, and you can skip Rocket for miles on the calm seas.

The best Fish Out Of Water players (like Larsen, whose strategic gameplanning suggested a lot of game-film watching) select different fish in different weather, throw those fish differently, and use the limited boost you're given differently and at different times. If it's raining and you fling Micro the whale straight upward, he's going to come down into the choppy water with nary a skip. But man, can Micro fly a long way in the snow.

Larsen says this kind of subtle depth is key to the success of all of Halfbrick's games. "In Jetpack Joyride, for example, there are six different vehicles, and they all control differently. They all behave differently, but they all still work with just one touch. You don't have to change anything, or go into some different mode of play — that's just really great design." The company's games rarely tell you what to do with these differences, instead offering you the chance to learn from your own crash landings. Larsen compared it to Dark Souls, the famously difficult game that tells you exactly nothing about how to play it — it's infuriating, and infuriatingly addictive. "We don't deliberately make things unfair," he said, "but the game has a set of rules, and sometimes those rules will not go your way." 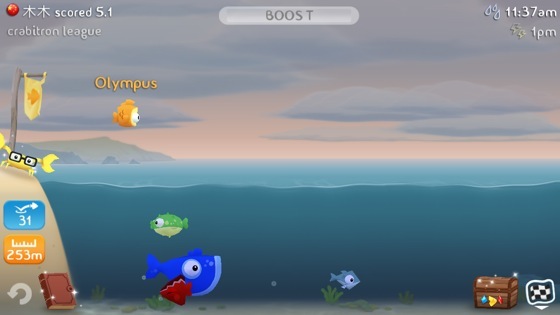 You don't always know the game's rules, and that's the point

In Fish Out Of Water, there are perhaps more wrong ways to play than right ways, which left Halfbrick with the challenge of giving users enough to play right without giving away the game's many secrets. "We try and help guide that at the start with various cues," Larsen said, "so you don't throw the fish too high or whatever. People will screw up, but it's good that they screw up so they learn from their mistakes. The first time anyone plays Fruit Ninja, they see a bomb and slice it, and it blows up and that's the end of the game. And once they've done that, they know for next time. So it's the same deal with this — we want to make sure people learn as they go, but at least give them a clear picture at the start of what this game's all about." It all ensures plentiful low scores and maybe a little too much frustration, but it certainly kept me coming back for another round. 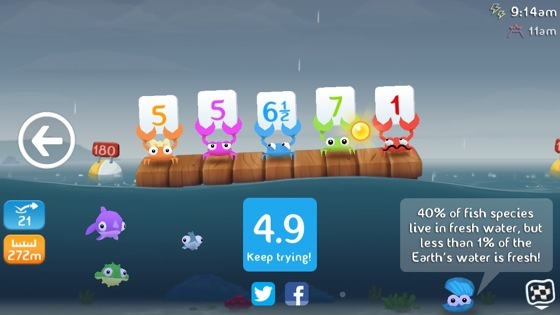 Part of Halfbrick's success both as a business and a game designer came from its ability to produce viral hits that also made it a lot of money — Jetpack Joyride basically perfected the art of the upsell, giving you the game for free but charging you for better jetpacks, power-ups, and seemingly everything else. Fish Out of Water is a refreshing difference: the game is 99 cents, and the only thing you can buy is packs of gems, which are basically cheat codes that add skips or distance to your throws. Larsen said the in-app purchase model might come later, with options to buy more fish or more unlockables, but also said Fish Out of Water is "definitely a pay a dollar, buy it, and play it game. If we knew it wasn't, we wouldn't have made it that way."

Paying a dollar and playing the game is a refreshing change

Even now, it's definitely worth the dollar. Fish Out of Water is much more complex than Jetpack Joyride or Fruit Ninja, and involves a level of forethought and strategy none of Halfbrick's other games require. There are leaderboards and leagues, and Larsen says getting a perfect 10 really is possible. I've gone from a 3.4 to a 9.2, and I'm pretty sure I'm not going to be able to stop until I hit ten. Or for a while after that.