A $15,000 American-made machine is the latest entrant to the craft-coffee world

As America has become increasingly infatuated with coffee and the myriad of ways it can be brewed and consumed, boutique coffee shops have enjoyed explosive growth. While K-Cup-like pod-based systems are now accounting for more than 25 percent of ground coffee sales to average consumers, coffee aficionados are constantly pursuing new ways to make the perfect cup of coffee — and coffee shop owners are equally trying to meet the demands of these particular drinkers. We've already taken a look at expensive, hand-made boutique coffee makers for the home, but I recently got to experience the Alpha Dominche Steampunk brewer, an American-made $15,000 machine designed to live behind the counter of your favorite coffee house.

The Steampunk is the brainchild of Khristian Bombeck, founder of Alpha Dominche and a coffee shop owner himself. The product of over four years of development, the Steampunk blends artful craftsmanship, premium materials, and innovative engineering into a machine that can produce world-class cups of coffee with repeatable accuracy. Though its name conjures up images of elaborate 1890s costumes and an abundance of copper, Bombeck told me that it made sense to call the machine the Steampunk because it is actually powered by steam.

But don't be fooled, the Steampunk has modern features and a clean aesthetic that would be comfortable in most any high-end coffee establishment. That's in part thanks to the team that Bombeck assembled to help design and build the machine, which features design-conscious architects and engineers.

What makes the Steampunk different from other coffee makers is its ability to quickly and repeatedly brew cups of coffee to exacting specifications. Bombeck describes the Steampunk as a "semi-automated single serve" machine, meaning that while it's not as automated as the Mr. Coffee on your kitchen counter, operating it only requires a few minutes of training. That's a stark difference to the years of training and experience it takes to become a skilled barista that can operate a complicated espresso machine well. Despite its simplicity of operation, the Steampunk can be configured to brew coffee in any style from French Press to pour over to siphon, with very granular controls over water temperature and pressure.

The Steampunk can brew up to four different coffees at once

The Steampunk 4.0, the version rolling out to coffee shops now, can brew up to four different coffees at once, giving a trained operator the ability to crank out 60 to 80 cups an hour. In the world of specialty coffee, where a single pour over-style cup can take upwards of five minutes on its own, that's quite impressive. (The one type of coffee that the Steampunk is not designed to do is espresso, so it is meant to complement the traditional espresso machine, not replace it.) 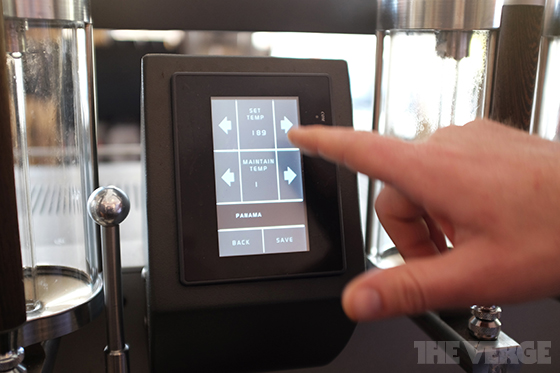 To see the Steampunk in action, I went to La Colombe Torrefaction in New York City. The owners of La Colombe were so smitten with the Steampunk demos last year, they demanded to be the first specialty coffee shop in the world to have it sitting on their coffee bar. The machine itself is quite impressive to behold: the four distinctive chambers (Alpha Dominche calls them "crucibles") sprout from the from the front of the Steampunk and are made of stainless steel and glass with wooden tap handles. The taps to dispense the coffee from the crucibles are actually repurposed beer taps and valves.

Recipes can control parameters such as temperature, pressure, and agitation

Splitting the four crucibles into two pairs is a touchscreen panel, which acts as the main control of the Steampunk. From here, coffee shop managers can input different recipes for various types of brews, with control over temperature, pressure, and agitation. Baristas can then start the machine by just choosing the recipe that they are brewing for and then filling the correct crucible with fresh ground coffee. For now, the recipes are entered by hand through a simple interface, but Bombeck says that a cloud-based system is in the works that can automatically update every machine with new recipes.

Once a recipe is selected and the coffee is loaded, things get really interesting. Powered by a 5700-watt heating element, the Steampunk uses steam to rapidly heat water up to a maximum of 212 degrees Fahrenheit . When the water is at the desired temperature, it is forced by steam up through the crucible to the upper chamber to mix with the coffee grinds. This transfer of water then creates a vacuum in the lower chamber. The crucible's piston can then be agitated up to three times during the brew process (determined by the programmed recipe) to ensure the coffee grinds are properly soaked.

After brewing in the upper chamber for a prescribed time — typically 45 to 60 seconds — a computer-controlled valve is released and the vacuum draws the coffee through the filter built into the base of the piston and into the lower chamber. The barista then uses the tap to dispense the brew into a cup or pitcher, pulls the piston from the top of the machine to dump the grinds and give it a quick rinse, and then runs an automated rinse cycle through the crucible to flush out the crucible and starts the process anew.

I was able to brew delicate and nuanced coffees in minutes

Bombeck promised me that operation of the Steampunk required minimal training, and sure enough, after a quick demo and a handful of instructions, I, an unexperienced barista, was able to brew delicate and nuanced cups of coffee from the machine in minutes. Simple operation and ease of use is crucial for a restaurant setting, where establishments don't necessarily have the time or budget to train experienced baristas, but still have patrons that demand high-quality coffee. Using the recipes programmed into the Steampunk by La Colombe's coffee masters, I brewed a sweet Panamanian coffee in the pour over style, and a darker Kenyan roast with a French Press emulation. Both coffees were excellent and showcased the range of styles that can be brewed with the Steampunk.

While the Steampunk 4.0 is available to coffee shops now, the company recently showed off the Steampunk MOD, a custom installation that hides the boiler and plumbing under the counter and only reveals the crucibles to the barista. The Steampunk is initially launching in five coffee shops in New York, Philadelphia, Salt Lake City, and California, and Alpha Dominche plans to deploy it in coffee shops in Japan, Australia, and other parts of the world by the end of this year.

You and I still may have to deal with crappy drip machines or time-consuming single-serve methods at home, but coffee shops now have a better option, and a good-looking one at that.