In the 48 hours that followed Monday's tragic bombing in Boston, no one came forward to claim responsibility for the attack and law enforcement did not name any suspects. The FBI and local Boston police did, however, ask the public to pass along their photos and video and to report any suspicious behavior. Into this vacuum of concrete evidence poured a flood of over eager do-gooders and amateur detectives from online communities such as 4chan and Reddit. They shared images and suspicions, focusing in on people from the crowd who seemed to be carrying black bags potentially filled with explosives.

One of these pictures found its way to the front page of the New York Post, which claimed two men who had been highlighted online as the key suspects being pursued by the FBI (as of this writing, the FBI has not released any photos to the press or public). This would quickly turn out to be a horrendous mistake.

As journalists like Anthony De Rosa reported, the crowdsourced detective work should have been treated with a grain of salt. "Since this work is being done over the internet, it's not being done in a professional capacity," said De Rosa. "There is potential for people photoshopping these images, there is potential for people having a cause, or an activist trying to push the investigation in a certain direction, whether its domestic or foreign. It's being done messy and in real time, and done by amateurs, so it's interesting to look at, but you have to keep those things in mind, when you're looking at what conclusions they are coming to."

The New York Post apparently missed that memo. This morning its front page story focused on two men under the headline, "BAG MEN: Feds seek these two pictured at Boston Marathon." The image was of two men in track suits — one with a black backpack — both of whom appeared to be of Arab descent and had been highlighted by users on 4chan and Reddit as potential suspects. Users pointed out what they saw as suspicious behavior. The Post reported that their picture was being circulated among law enforcement as key suspects. 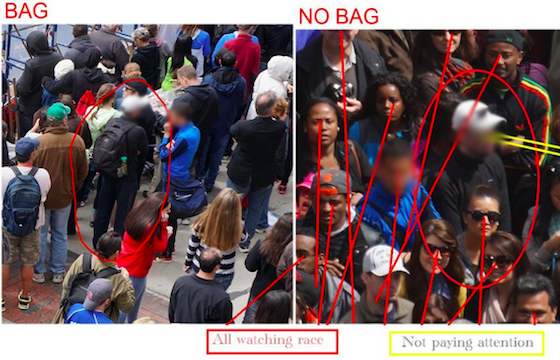 As it turns out the two men were a local high school track athlete and his coach who had come to watch the race. CBS reporter John Miller contradicted The Post, reporting that neither man is a suspect and that their pictures were not circulated by law enforcement.

The cautionary tale to keep in mind here is Richard Jewell, the security guard who was seen as a hero of the 1996 Olympic bombing until a report in The Atlanta Journal named him as a "person of suspicion." Reporters were quickly hounding him like "piranha on a bleeding cow" and while he was eventually cleared by the FBI, Jewell felt he could never really outrun the notoriety.

Redditors, meanwhile, furiously tried to backtrack and avoid further media scrutiny of the two men, having decided, after finding the younger man's Facebook, that they were in fact innocent after all. The subReddit dedicated to the Boston bombing went so far as to create an entire post begging the media not to use any of their work as factual evidence in future stories.

The Boston Marathon bombing: after the manhunt, the search for answers continues