Will the networks play fair with news as they take on upstart TV services?

The GE Building at 30 Rockefeller Plaza, home of NBC.

On Tuesday, Aereo entered the public relations battle against the broadcast TV companies trying to shut it down: it took out a full page ad in The New York Times to publicize its court victories. The ad read in part: "The broadcast networks have been granted free and valuable broadcast spectrum worth billions of dollars in exchange for their commitment to act in the public interest. It's a sweet deal... Along the way, cable and satellite providers entered the picture. In addition to free spectrum and advertising revenues, the networks got very lucrative retransmission fees from these providers. And so, for many, broadcast television is now offered in expensive fixed bundles or packages. Yet many millions of Americans continue to use antennas to get broadcast TV."

But a single ad is just the first step in a fight that appears to be coming into focus for Aereo: the broadcasters will continue to fight it out in court, and if all else fails, attempt to stir up public opinion and persuade Congress to pass legislation that would effectively ban services like Aereo and Dish Network's Hopper, which removes TV commercials automatically.

"Television is the third rail of politics."

That's the prediction Aereo CEO Chet Kanojia made in an interview with The Verge two weeks ago. Yesterday, Kanojia said that he expects such a strategy to backfire at the Ad Age Digital Conference in New York, according to a story in Variety. "I won’t go into hypotheticals… but the real question is a consumer question," Kanojia told conference attendees. "Can you disenfranchise 54 million consumers?" Later Kanojia said that "the basic logic is these businesses were built on public spectrum," and "somebody is going to take advantage of that and provide value to the consumer." 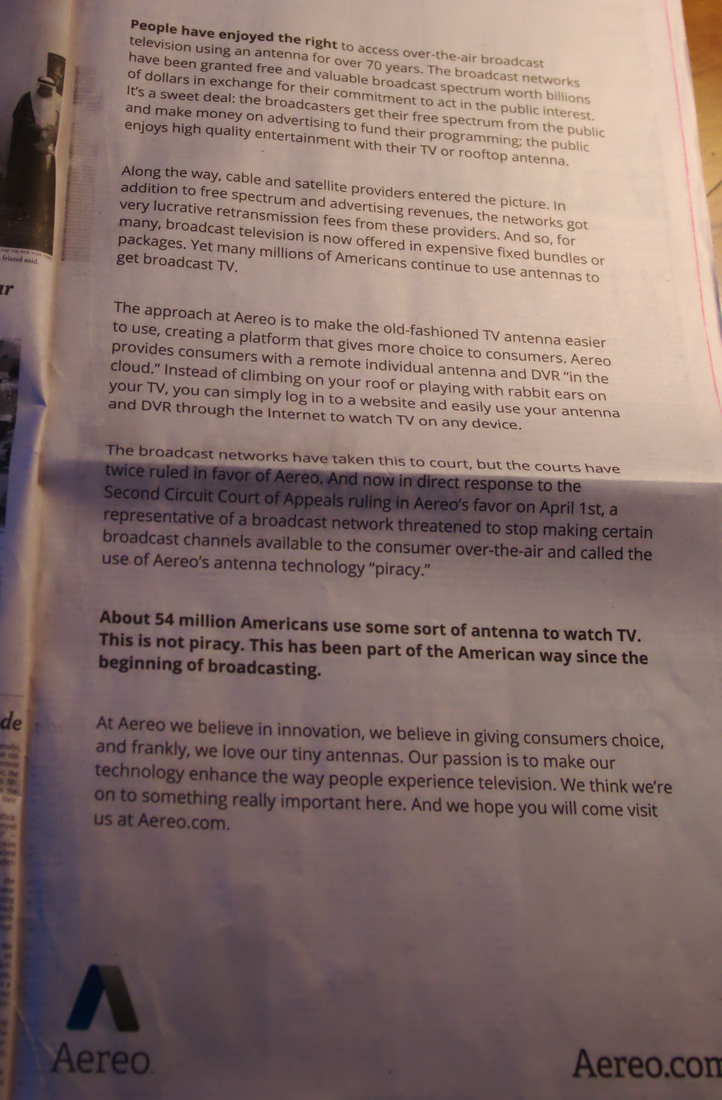 The 54 million consumers Kanojia referred to are the Americans who rely on antennas for TV viewing, according to a recent study from GfK Media. Other researchers say the number is closer to 11 million.

Anything that affects TV viewing can prompt many Americans to become politically minded, according to Matthew Polka, president and CEO of the American Cable Association (ACA), which represents a group of independent cable and broadband providers. "One of the mantras that we have in our work in Washington is 'television is the third rail of politics,'" Polka said to The Verge last year. "If you screw it up too much then trust me people will call their congressman and senators to complain." And In recent months, the networks have waged an all-out public relations war against Aereo and Dish, setting the stage for future political action.

Last week, Fox President Chase Carey sent the media into a frenzy when he threatened that, if Aereo was allowed to continue operating, he would pull his company's programming off the free airwaves and put it behind a paywall. Not long after Carey made his comments, CBS chief executive Les Moonves followed with a similar threat to charge for programming. The week was capped off with incendiary statements from Leo Hindery, who oversees a private equity firm and operated the YES sports network, of which Fox now owns a large stake. During a videotaped interview with Bloomberg, Hindery called Aereo a "pissant little company." He also hammered Barry Diller, the billionaire investor who helped create the Fox network and is now bankrolling Aereo. "I think it's despicable," Hindery said. "Barry is talented enough to be successful without poaching the models that, frankly, made him so wealthy and successful. I think it's tawdry."

"What we can't have is Barry Diller and this pissant little company taking over the air."

The TV networks headed by these executives are part of mammoth media conglomerates that collectively control Hollywood film studios, national radio networks, cable channels, and perhaps most importantly, numerous influential news organizations. And recent events call into question whether Aereo and Dish will receive fair treatment from the news media when so much of it is linked to the same networks trying to put them out of business — especially as the battle of public opinion rages on.

Almost every news outlets reporting Carey's comments last week noted that they followed a decision by a federal appeals panel denying a request by the broadcasters to issue a preliminary injunction against Aereo and shut it down. There was, however, a notable exception. If you watched the report about the controversy broadcast by NBC Nightly News, you wouldn't have learned about the broadcasters' courtroom setbacks.

In its piece on Aereo, NBC News included a lengthy explanation of what TV has meant to Americans through the decades. Aereo's CEO Chet Kanojia is quoted, but only about how the service functions, and there's nothing from him about the controversy. In contrast, NBC's story includes a quote from Carey calling Aereo "piracy." The network news group also tossed in this line: "Aereo doesn't pay networks for the content they spend hundreds of millions of dollars to produce." 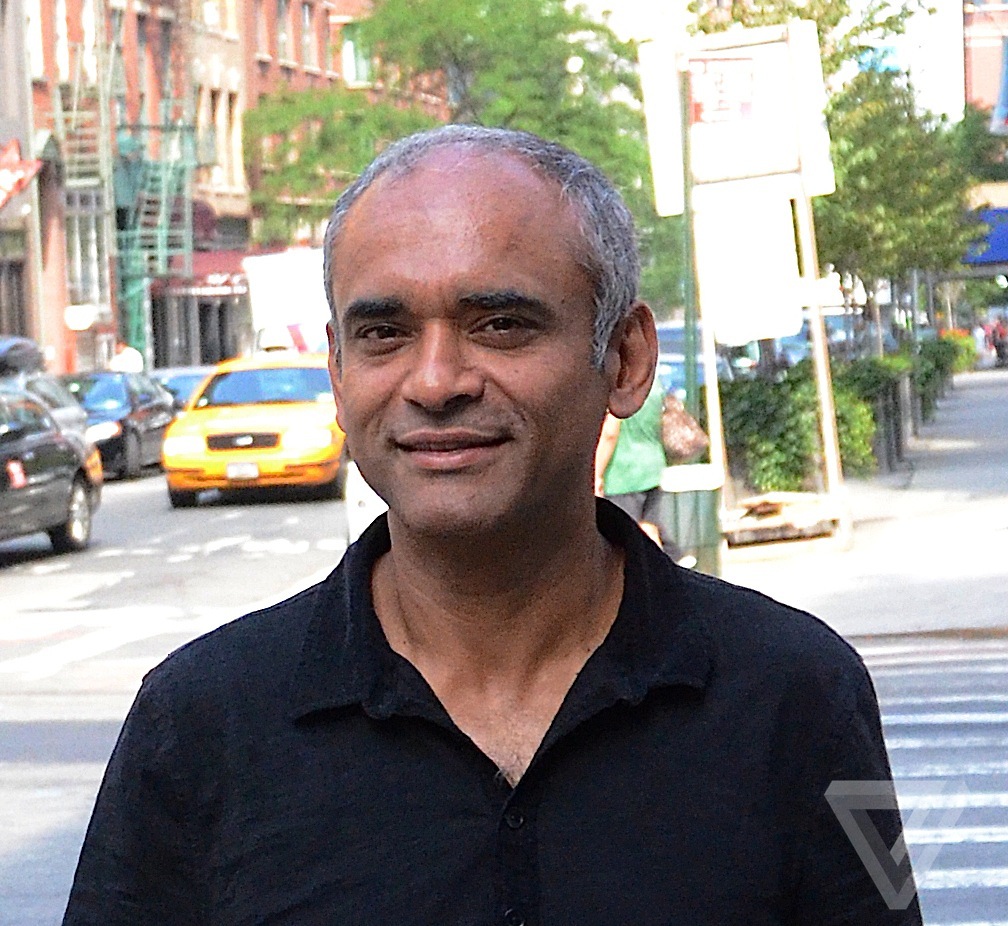 What NBC didn't say was that, according to two separate federal courts, Aereo's service is legal. The ruling by the appeals court upheld a district judge's decision and was not insignificant. The court allowed Aereo and Kanojia (photographed at right) to continue operating until the lawsuit with the broadcasters is resolved, which could take years. "We were disappointed that NBC News didn't include a mention about the court decisions," Virginia Lam, an Aereo spokesperson, told The Verge. "All we ask are that the facts be reported."

A spokesperson for NBC News disagreed. "The report was a fair and straightforward telling of how the service operates in the changing media environment. It fully explained why Aereo argues that the service is legal, and included an interview with Kanojia. In the interest of full disclosure, it also noted that NBCUniversal, the parent company of NBC News, has filed suit against the service."

"All we ask are that the facts be reported."

The coverage of these cases by the networks' news operations follows in the wake of the CBS-Dish conflict. In January, The Verge broke the news that CBS executives ordered reviewers from CNET, the tech news and reviews site CBS acquired in 2008, to quietly change the results for its "Best of CES" award. CNET editors originally voted The Dish Hopper the winner, but CBS demanded that they drop the Hopper and choose a new winner in an effort to protect its lawsuit against Dish — the broadcaster didn't want to be embarrassed by the award in court. CNET's top leaders agreed to CBS' demands, which included keeping quiet about the incident. (Disclosure: The author of this story formerly worked at CNET and resigned as a result of CBS' actions.)

Dish also accused CBS of ordering an actor from one of its TV shows to remove a Twitter post endorsing the Hopper. CBS denied the accusation.

The networks have reason to be worried about Dish and Aereo: both technologies have the potential to seize control over some of their distribution, and it’s easy to see why they’d fight back against them using all of their resources — including their news divisions and lobbying arms. But what’s potentially more worrisome for the broadcasters is that the public appears to want services that can help slash their cable bills.

"Sports is the leading trigger on consumers today who look at content available on cable or satellite and say: 'Why do I have to pay for those channels?' said the ACA’s Polka last year. "Particularly in light of the $42 billion a year for NFL, $14 billion for MLB, the $1 billion for college rights, and on and on and on... The revolt can come in many ways, whether it’s direct in an appeal to Congress or cutting the cord." As the fight for the future of TV heats up, it appears Aereo and companies like it will have to fight the broadcasters both in the courts of law and in the courts of public opinion.

Nilay Patel contributed to this report.