The FBI has released photos and video captured from the scene of the Boston Marathon finish line, showing two suspects that may be implicated in Monday's bombings. In a press conference, the agent in charge of the investigation identified the two only as "Suspect 1" and "Suspect 2," both of which appear to be walking together; one suspect is seen possibly planting an explosive device. The FBI is saying that one suspect was initially identified; after examining more evidence, a second was also found. These two aren't formally identified as the bombers, but they're being sought for questioning; the FBI also warned bystanders not to approach the two if seen. Though CNN reported yesterday that a suspect had been arrested based on video evidence, the FBI later refuted this claim.

Police and the FBI have released a number of details about the event, but we still don't know who was behind Monday's bombing. Early in the case, police searched the apartment of a Saudi student and apparently questioned him as one of several witnesses, leading to speculation that he might be responsible. However, CNN later reported that police believed he was simply "in the wrong place at the wrong time" and was not considered a potential suspect.

While the FBI and police have examined videos for evidence, posters on 4chan and Reddit have attempted to identify suspects themselves, picking through public photos to find people wearing backpacks or apparently acting suspiciously. Unfortunately, those efforts have so far backfired: the New York Post picked up one of the photos as a front-page image this morning, incorrectly stating that the two men shown in it were being sought by law enforcement. Now, the FBI says that "other photos should not be deemed credible," asking the public to only identify people based on the above images. Anyone with information is asked to reach out to 1-800-CALL-FBI.

Update: The New York Times has posted a higher-resolution image of the man referred to by the FBI as Suspect 2, wearing a white baseball cap and without a backpack, taken in the aftermath of the explosion. The image was originally posted by David Green on running forum LetsRun.com, a cropped version of which is posted below. Suspect 2 is on the left. 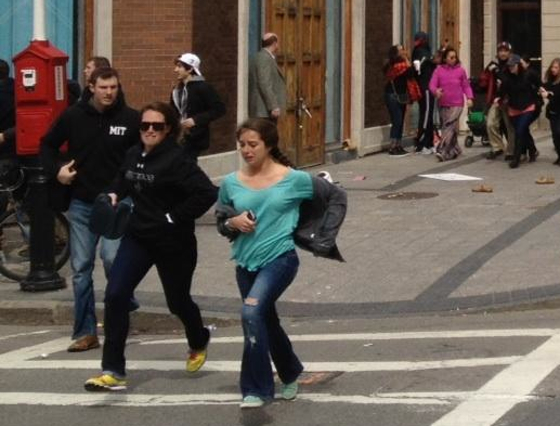 Update 2: The FBI has released new images of the suspects, including one where both appear together. Suspect 1 is on the right, Suspect 2 is on the left. 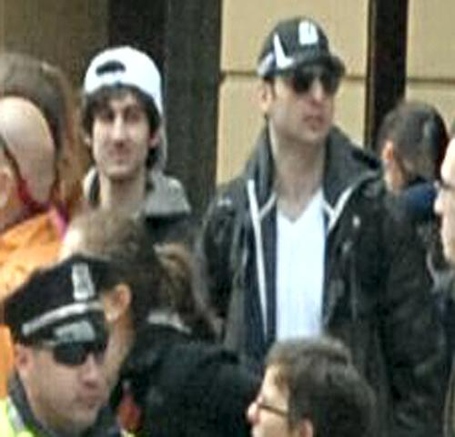 The Boston Marathon bombing: after the manhunt, the search for answers continues