Following news last night that the FAA was close to giving the Boeing 787 approval to return to the skies, the administration has officially approved proposed design modifications to make the plane safe for flight. In a press release, the FAA says that it will give airplane operators instructions on how to implement the design fix next week and it will lift the grounding order that has kept the Dreamliner from flying. The ruling will require operators to "install containment and venting systems for the main and auxiliary system batteries, and to replace the batteries and their chargers with modified components."

The development comes just over three months since the FAA grounded the airplane in the US. Today's approval from the FAA doesn't represent airline administrations around the world — those regulators will need to also approve the changes for certain international flights to resume.

Update: While the company doesn't offer an exact date that flights will resume, Boeing says that it has already deployed teams around the world to install improved battery systems on existing Dreamliner planes. The company will also begin installing them on new aircraft produced at its two final-assembly plants. For existing aircraft, "airplanes will be modified in approximately the order they were delivered." Boeing expects to deliver all new aircraft shipments by the end of the year.

Update 2: Boeing is detailing the battery improvements in a media briefing, and says it's much improved. Where the original battery would rapidly reach temperatures as high as 300 degrees Celsius when driven to failure, the new battery design doesn't get anywhere near as hot, causes no fire, and dissipates its remaining energy slowly and gracefully. See picture below: 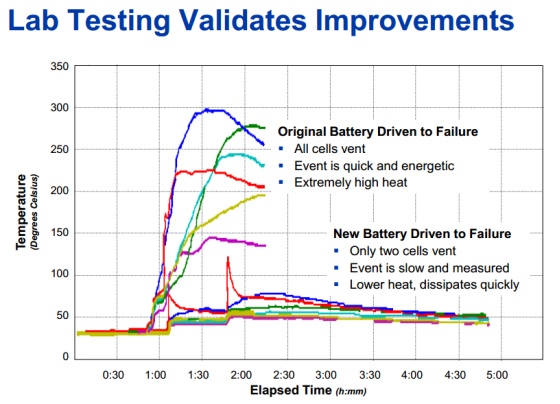 Boeing claims a new enclosure around the battery also means that any issue would be fully contained, and could starve any potential fire of its needed oxygen. "Any type of battery failure is no longer a safety concern at all," said Mike Sinnett, Boeing's 787 chief project engineer. When asked why that wasn't true of the previous battery despite Boeing's prior claims, Sinnett explained that the company has "learned a lot about how to test batteries" since then. The company claims that it has now devoted 100,000 hours specifically to testing.

Boeing estimates it will take five days per plane to install the battery improvements, and installation will begin today. Ten teams, a total of 300 employees, will install the batteries in existing Dreamliner planes. There may also be a delay for logistics, time for public comment on the FAA's airworthiness directive, and time to retrain pilots before the 787 might fly again, and Boeing declined to comment on just how soon that might be. "The rest is really up to the airlines," said Sinnett.

You can read the company's PDF presentation here.

More from this stream Boeing 787 Dreamliner hits problems after launch