My lockdown: here's what it was like living in Boston this week

I’ve lived in Boston (or one of its neighboring towns) for almost 14 years, and I can’t remember a time that the entire MBTA, our public transportation system, shut down. No trains, no buses, no commuter rail. Maybe on 9/11, and parts of the system have been out of service during particularly brutal winter storms (or the occasional hurricane), but I can’t recall a day like today. Thanks to a wild manhunt for two young men who allegedly detonated explosives during the Boston Marathon, the entire region was held hostage for nearly a day until law enforcement was eventually able to tighten the noose.

The days immediately following Monday’s attack were relatively quiet and as normal as they can be — considering bombs were detonated in the heart of New England’s biggest city — but that all changed late Thursday evening. By Friday morning, sections of Boston and its surrounding cities (including Cambridge and Watertown, where an MIT police officer was killed and where the suspect was eventually found) were under a “shelter-in-place” order. No one was to leave their house for any reason, businesses were encouraged to stay closed, and, of course, the MBTA was completely closed. Eventually, this order encompassed all of the city of Boston, and hundreds of thousands of people found themselves huddled in their homes, letting law enforcement do its work.

It was an incredibly tense and strange day, perhaps even more so than the day of the bombing. For me, watching that day’s events unfold from the relative safety of my Somerville condo, the day was spent processing what had happened to my city rather than being in active fear for my safety. The day of the bombings, I had very little concern over leaving my house to walk the dog, or picking up my wife as she made her way home. However, today’s events essentially paralyzed the entire region and made the simple act of walking downstairs to take out the trash a risk that just wasn’t worth taking. While it was incredibly unlikely that my specific neighborhood would be at risk, there was zero indication of where the bomber was throughout the day. And the area’s small enough that anything was really possible — just for one “too close for comfort” example, the apartment where the two bombers lived was two blocks from my old home.

With the entire city shut down and nowhere to go, we were simply captives of TV and Twitter, watching the drama unfold. Unfortunately, both mediums can become quite the irritating echo chamber, though Boston’s local TV news was surprisingly balanced and overall fairly useful this week. You want to know what’s happening, you get hooked on the constant flood of “information,” but after a few hours you realize you’re learning very little (and, at times, feasting on a banquet of misinformation). Disconnecting isn’t really an option, either. Trying to just relax and watch a movie, read a book, or even do work doesn’t go so well when you can’t stop looking at Twitter to see how your friends are holding up or if there’s any actual news to be caught up on. 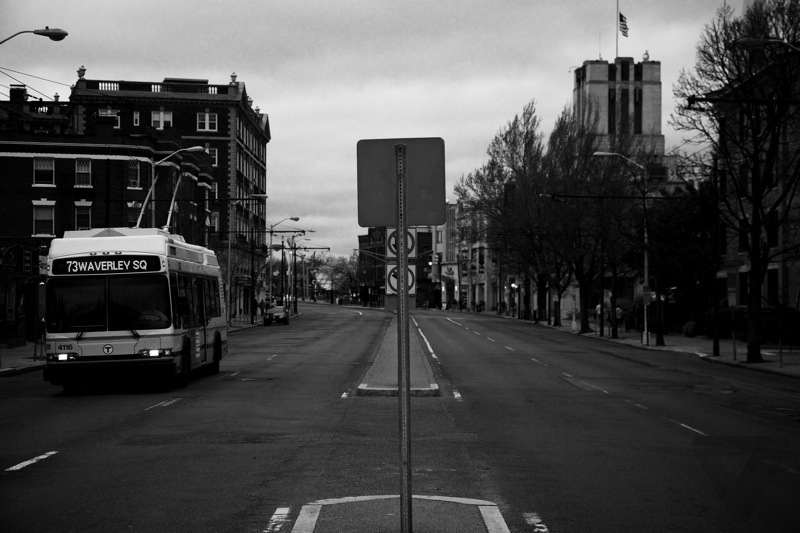 Early in the day’s proceedings, there was a huge amount of police interest in a Watertown residence, and from all the news it sounded like the suspect was close to being apprehended — I started to feel like the events would be over by lunch and we could get back to real life. But before long, it was clear that an apprehension wasn’t imminent, and we were plunged back into uncertainty. The Red Sox and Bruins cancelled their games, and the possibility of the city being held under siege for the rest of the day, through the weekend, and even into next week didn’t seem far-fetched.

As for the city itself, its streets were deserted in a way I’ve never seen before except during the biggest snowstorm — and even then, the weather forecast gives you a reasonably good idea of when the snow will stop and you can get outside to shovel. There was no such forecast today.

Right around 6pm, the shelter-in-place order was surprisingly lifted, with officials saying they couldn’t reasonably expect the city to stay shut down indefinitely — but citizens should still exercise extreme caution. Fortunately, the suspect was apprehended hours later, and it looks like Boston will be rewarded with a “normal” weekend. Of course, things won’t be normal — this was one of the strangest and most unsettling weeks the city has faced — but at least the Red Sox will be back at Fenway.

Update: As pointed out by an astute commenter below, Boston and the surrounding cities were similarly shut down during February's huge blizzard — a fact I didn't recall because I was lucky enough to be out of town that week. While the circumstances surrounding this week's events were obviously different, this wasn't a totally unprecedented move to make.