I find myself awake, in a mysterious rowboat, heading to a lighthouse, surrounded by the sea. Walking inside, verses from the bible tickle the back of my brain. Sin and the search for redemption. And then, with a burst of light, everything changes. I ascend to a heavenly metropolis perched among the clouds. The air is full of music and the streets ripe with bright colors. Children are laughing, frolicking in the park. I join a crowd playing at a raffle, hoping to win a prize. And suddenly I’m staring down the barrel of American history, face to face with brutal bigotry, on the run from the law, seeking some answers at the end of my gun. 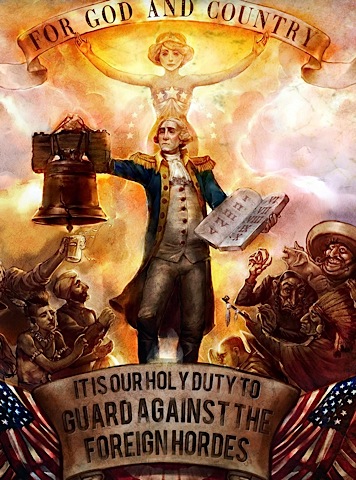 I picked up a copy of BioShock Infinite this week, and it got me thinking. Are video games art? It’s a tired question with an easy answer. Ever since Marcel Duchamp put a urinal on a pedestal, the definition of art has been rapidly expanding. From graffiti on a subway car to a beautifully crafted armchair, we have come to see fine art all around us. If you’re looking for some kind of official statement, perhaps the Museum of Modern Art’s addition of video games to its permanent design collection will suffice.

But there is a more interesting question still in play. Most video games, like novels, TV serials, and feature films, are narrative art made for mass consumption. And increasingly, video games are the most popular of the bunch. Like films, they reach tens of millions of individuals and generate billions in sales. That means studio style productions that require years of labor and hundreds of millions in investment capital to make and market. In that environment, is it possible to produce work that is simultaneously an economic and critical success, fun to play, and also an important piece of art with a deep, resonant effect?

With BioShock Infinite, my answer is yes. The game is aesthetically magnificent and a joy to play, introducing some innovative game mechanics to the well-worn genre of the first-person shooter. Its narrative is rich and subtle, a perfectly paced trail of breadcrumbs that keeps you eagerly moving forward. And the art and design, from the moment you enter the floating city of Columbia, is breathtaking.

Beyond the aesthetics, what really stood our for me was the stark and intelligent treatment of deeper themes: racism, nationalism, and religion in America. The story may be set at the turn of the 20th century, but it forces the player to ponder the same questions about immigration and tolerance that helped decide our most recent presidential election and, just this past week, vexed our nation’s highest court.

The basic storyline is a classic tale from myth and video gaming: a hero must save a princess from a tower. Luckily, BioShock Infinite complicates things quite a bit. Our hero has elements of American film noir, a jaded detective, down on his luck, with a dark past he would rather forget. In this case, the main character is a former Pinkerton, adding another wrinkle of social and historical consciousness. And the woman he's rescuing is no Princess Peach. Not only can she hold her own in combat, but more often than not, she's the one saving his hide.

What made the original BioShock, released back in 2007, such a classic was the way it immersed you in a compelling world that borrowed from American history without simply aping it. In that first game, the key ingredient was the philosophy of Ayn Rand, fleshed out with anachronistic art deco design and period piece jazz. While this Randian milieu was a historical throwback, her ideology has become increasingly important in modern American life, especially our politics, giving the game a timeless quality.

In BioShock Infinite, the creators again present a funhouse mirror of American ideological history. Comstock the Prophet and the citizens of the floating city of Columbia meld strains of religious fervor, anti-government rhetoric, jingoistic nationalism, and a twisted worship of the founding fathers, all carefully lifted from historical events at the turn of the 20th century, but simultaneously satirizing the Tea Party movement that has roiled our politics for the last six years.

Venerable film critic Roger Ebert argued that video games can never be art, because like football or chess, their primary purpose is a framework for competition, not a medium for expression. While I disagree with his larger point, his logic is worth examining. A lot of video games fail as great art by falling into the trap of heavy handed morality plays, where the characters move along a fixed narrative arc, but are given the illusion of choice, usually an obvious one between good and evil.

What makes BioShock so artful is the way it undercuts this sense of control. The game upends the moral calculus of your rote choices by constantly shifting the reality under your feet. A benevolent decision one minute becomes a vile one the next. Quantum mechanics are the logic behind this fractured center, where time and space can easily unwind, much as it did for modern authors like Barthelme and Pynchon. Like a reader with his novel or a viewer of a film, the gamer playing BioShock Infinite is travelling through a carefully wrought narrative that is more powerful than the mechanics of shooting, jumping, or choosing between doorway A and hallway B.

So why bother offering players a choice at all? Because participation is one of the inherent strengths of video games as art. You may realize if you play the game a second time through that your choice doesn't impact the storyline, but when you're given the option to go along with Columbia's horrid racism or stand against it, the impact of the narrative, especially as you first experience it, is that much deeper.

BioShock infinite is the product of 200 people working for more than four years at the cost of more than $100 million. But it is also the brainchild of Ken Levine, the founder and creative director of BioShock developer Irrational Games. The story’s epic conclusion feels like the work of a single, strong voice, at once mind-bending and emotionally resonant, by far the most satisfying piece of art, in any form, that I’ve experienced in a long time.