Asian car manufacturers have been demoing Personal Mobility Vehicles (PMVs) for what seems like forever. They're usually fairly dull, but every once in a while a concept comes along that's earth-shatteringly good. Hyundai's E4U is one such concept. Looking like a bumblebee-colored egg that fell into Tron's grid, the E4U moves by using a semisphere that constantly spins horizontally. The spinning semisphere is tilted to generate drive while two stabilizing wheels at the rear keep it moving straight. The technique is similar to how a helicopter steers — it tilts to move with its large horizontal rotor while utilizing a vertically-mounted rotor for stability. It's not clear what exactly powers the E4U, but it seems unlikely to be gas.

A fully-drivable E4U was recently demoed for the first time at the Seoul Motor Show. It's still an early concept, and at the moment Hyundai's demo unit is limited to walking speed. Development only began in October 2012, however, so we're optimistic that the company will be able to improve performance. Unfortunately, there's no word on whether the E4U will ever be released publicly, but hopefully Hyundai will consider releasing the stunning helmet anyway. 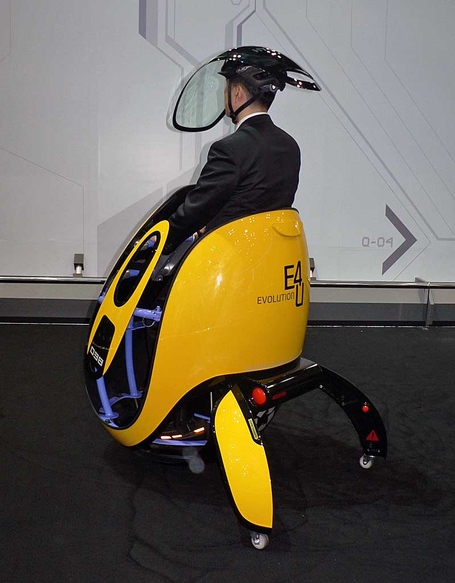